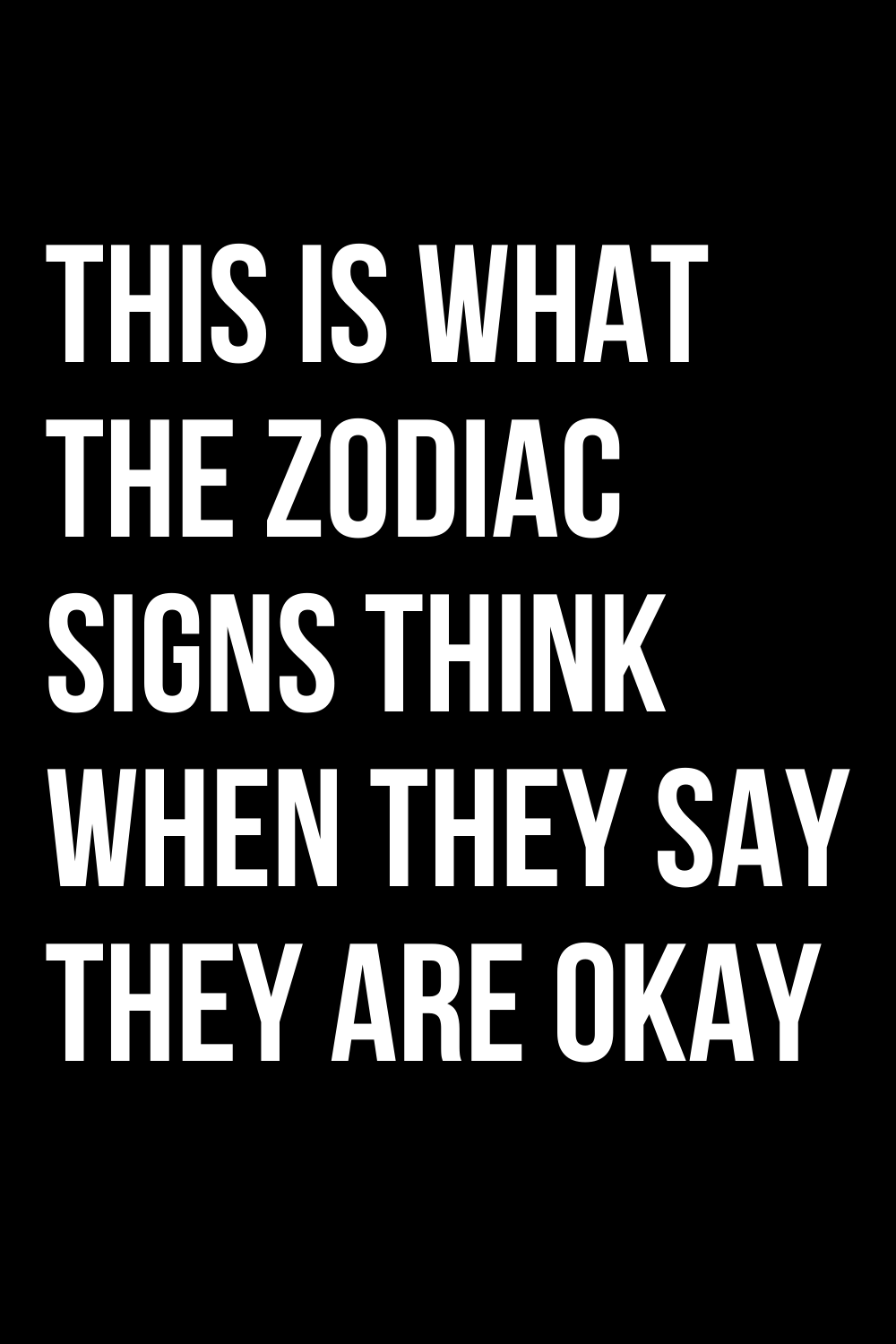 Find out what each zodiac sign would mean when asked how they are doing.

It’s a classic, two people meet and the most obvious question of all is the now very popular “how are you”. Most of the time it is such a spontaneous and unthought-of way that the person asking the question appears too distracted to grasp the answer. On the other hand, people tend to give very different answers, both based on character and circumstances. Thus, if some begin to initiate an entire discourse simply starting from this question, others seem to escape, responding quickly and avoiding entering into the topic. But what do you mean when you stop in the middle of a simple “I’m fine” aimed at concluding the pleasantries? It seems that each person always means something specific and unspoken and that in many cases it can be understood precisely from the influence that the stars have on the zodiac signs. So today, after seeing what is the reason why each zodiac sign ends a relationship and how the various signs see the future, we will find out what the zodiac signs think when they say “I’m fine”. Since this is something that has to do with the way of feeling, the advice is to also check the profile of the ascendant.

Horoscope: Find out what each sign of the zodiac means when they say they are okay

Aries – I can do it alone
Those born under the sign of Aries are people who love to show themselves strong. Competitive as few, they rarely ask for help and always try to make it on their own so that they can boast of their successes without having to account for anyone. For this reason, unless they are in great confidence with those who ask them, those who ask them how they tend to always answer that everything is fine and in doing so they intend to highlight the very fact that they do not need anything or anyone. . Because they, after all, are always the first in everything and even when this is not the case, they love to make it believe and think it first.

Taurus – I have everything under control
The natives of Taurus often tend to go haywire when they are faced with a thousand things to do. Conscientious and determined like few others, they tend to organize everything to always have a good action plan. This often makes them tenser than they would like and when they say they are okay, in reality, they simply mean that they have everything under control. Even when this is not the case, they try to convince themselves because this is the only way they can not freak out and stay calm. And if there is one thing they particularly care about, this is the feeling of relaxation that they love to experience in every moment of their life and which they just cannot do without.

Gemini – I don’t know
The truth? Gemini rarely knows how they are and even when they have clear ideas, they are more than aware that their status could change at any moment. For this reason, they always prefer to say that they are fine, avoiding going into details that others would not understand. The thing is different if in front of them there is someone they care about or with whom they are in great confidence. When this happens, they can start complaining even for hours, telling a thousand reasons why things are not going well. But it is always a possibility. If they feel positive, the reaction will be quite different, albeit always extreme.

Cancer – It Doesn’t Matter
When they dismiss a question with a simple “I’m fine,” Cancer natives are just saying they don’t want to be a burden and prefer not to say how they are. Often theirs is just a tactic they use to see if they care. It is not something they always do consciously, many times it is pure instinct. In any case, their answer will always be vague, and only if well prodded will they decide to tell the truth, glad to have found someone who seems so interested in them that they insist on the same question.

Leo – I’m still evaluating
Those born under the sign of Leo do not always have clear ideas about how things are going and often prefer to avoid talking about it to study the situation thoroughly. For this reason, they almost always limit themselves to saying that everything is fine, continuing to think about what is bothering them. An attitude that at times makes them appear distracted and at others makes them so excited as to clearly show their state of mind. What matters to them is what comes next, when their projects are now complete and possibly successful. Until then, the truth about how they are will only affect them and their closest loved ones.

Virgo – It’s My Business
Virgo natives don’t like showing weaknesses. They prefer to show themselves all in one piece even when things go downhill. They do it more for their own sake and out of a desire not to be judged than for real strength. When they are alone they tend to get depressed and if with trusted people they can let themselves go to all the negativity they are capable of. In front of strangers or people who they consider not very close, they will always end up saying that everything is ok because this is what they want to think of them.

Libra – I need time
Those born under the sign of Virgo prefer to talk about problems when they are already solved. For this reason, they will always say that everything is fine even if it is not true and in doing so they will take time so that they do not have to think about what is bothering them. Once the problems have been solved, if they hear it they will say what it was but always and only when the feelings about it are now serene. From their point of view, they try to never show themselves too vulnerable since it is something that bothers them and therefore they will always avoid the plague.

Scorpio – I’d rather not say it
The natives of Scorpio are extremely reserved people. In saying that they are fine, therefore, they simply try to avoid confrontation, limiting themselves to giving an answer that works for everyone. In reality, inside them they always feel a mixture of emotions that are difficult to describe and that they prefer to keep to themselves, limiting themselves to studying them when they are alone or, at most, in the company of extremely trusted people. On the other hand, they would never, ever admit to being sick or needing something and this is because of the pride that distinguishes them and because of a sort of self-love that leads them to consider it a sign of weakness to put bare their feelings.

Sagittarius – You wouldn’t understand anyway
Those born under the sign of Sagittarius live in the absurd belief that no one can understand them. They feel a little bit special and a little weird and as a result, they avoid saying outright how they are going to avoid disappointment. In reality, they are less complex than they are led to think and it would be enough for them to explain themselves to gain understanding from others. However, it is a possibility that they tend to exclude on their own, and that often acts as a wall between them and others who, inevitably, perceiving them detached, end up distancing themselves. Their well-being is therefore often the symptom of something greater that should be investigated first of all by themselves and immediately after by those who know them best and based on this knowledge could help them. Sure, assuming they want it …

Capricorn – For now everything is ok
The natives of Capricorn don’t think much about certain things. Taken by commitments and thoughts related to work and family management, when asked how they are they tend to tell the truth almost always. If they are feeling down it is easy to understand with just a look and this, from a certain point of view, makes their relationships easier to manage. On the other hand, when they feel discouraged, they lean on those around them, regardless of the actual abilities of those around them. This can sometimes have more negative than positive effects. When they realize this, however, it is almost always too late and their mood has already suffered the consequences. With all due respect to those who live with them or are particularly close to them.

Aquarius – I don’t want to talk about it
Those born under the sign of Aquarius are people who care about their privacy above all else. For this reason, it is really difficult to enter their privacy and ask them how they are is a mere game of style that will always lead to an answer that does not correspond to the truth. Most of the time they might just shrug their shoulders but when they say they are fine the truth is that it doesn’t go so well but, more simply, they just don’t want to talk about it. The reasons can be of the most varied but certainly, among the first, there is the unwillingness to share something personal with others. The rest of the time it is mostly the thought that nobody really cares and that therefore it is useless to start a discourse that, on the other hand, would not lead to anything constructive.

Pisces – Not good, but I don’t mean to bore you
Pisces natives are used to comforting others and are in no way trained to receive the same treatment. When they say they are fine, therefore, most likely they are hiding an uneasiness or, even worse, a pain, which they prefer not to share and all to protect the interlocutors from the weight of their problems. In reality, most of the time, it would be enough to look at them more carefully to grasp their sadness but aware of how the world turns, they often rely on the fact that almost no one cares to know how they are. For this reason, they tend to hide every problem behind an “I’m fine” which by itself means more than many words.