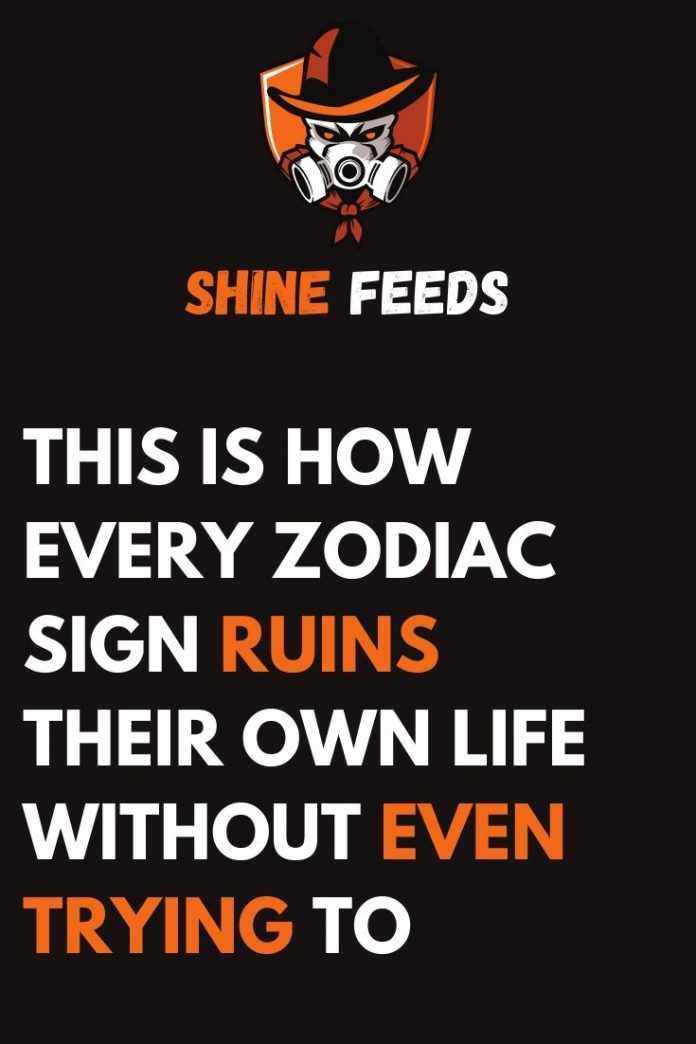 You ruin your life with negativity and allowing yourself to get lost in it.

Your short temper and stubborn nature will get you in a lot of trouble. You live in a negative world sometimes that people don’t want to be a part of.

You ruin your life not living it to it’s fullest.

You feel the need to control everyone and everything in your life. And when things don’t go the way you planned you take it out on the people you care about. The hardest thing you’ll come to understand is you can’t control people and situations aren’t always going to run smoothly. Learn to embrace it. Unplanned situations in life is what keeps it exciting.

And because of this, you are usually the one that hurts people the worst. Because you are indecisive about your own life you tend to drag others through the confusion and hurt really good people along the way.

You ruin your life putting others before yourself.

You are an emotional rollercoaster and you get easily lost in how you feel about people. Sometimes when you think you’ve met the right person you put them before yourself and love them a little more than you need to. It’s easy to get lost in love. But be careful you don’t lose yourself to it.

You are very good at appearing heartless and pretending you don’t care. As someone who puts their emotional needs second in life is wary of not closing yourself off too much because there will come a time where you’ll be overcome with a state of being lonely. Remember emotions don’t make you seem weak denying that you have any does.

You ruin your life being too hard on yourself.

You tend to put others before yourself and not make yourself a priority. While it’s selfless and people admire you for your kind heart, your ability to love others and love them deeply doesn’t reflect the relationship you have with yourself. You are the first to criticize who you are or point out your flaws without building yourself up to the way you. You are your worst enemy as well as the solution to that.

You ruin your life trying too hard to appease others and not asking for what you want and need.

As kind as you are and as much as everyone loves you, people take advantage of you and walk all over you. You hold your emotions in trying to be selfless but then it all builds up and it comes out very nasty and unkind. Sometimes you hurt the people you love most repressing your emotions and not wanting to face your problems.

You ruin your life thinking you don’t deserve love and are better off alone.

You are the toughest sign to get along with. You are painfully stubborn and don’t forgive people easily. Your heart isn’t something that’s easy to win over but once someone does, they have your love and loyalty for life. But your greatest flaw is you’re a little bit selfish and you hurt people who care about you in attempts to simply look out for number 1.

You ruin your life being afraid. You’re so afraid of failing you don’t do anything at all and you stay frozen in the same spot.

While you have a lot of great ideas sometimes you get lost in all of it. You don’t seem to focus or get much done at all. Focus on one task at hand and go from there.

You are someone who is unbelievably hard on yourself and a little too focused sometimes. You are the person who is always on the go and doing something but don’t forget to slow down and live life a little bit or you’ll miss out on the things that are more important than goals.

You ruin your life by letting your past influence your future.

You tend to keep everything to yourself and you’re your own worst enemy. You don’t forgive yourself for your past and you allow it to dictate your future carrying unnecessary baggage along the way.

You tend to push really good people away because you think you’re better off alone than with someone who could be good for you.

You ruin your life by choosing the wrong people.

You choose toxic people and habits. As someone who genuinely means well and has probably the best heart out of all the zodiac signs, you tend to gravitate towards the wrong people who dim your light a little bit and drain you.

When it comes to habits, you deal with pain in your life choices all the wrong things to cope with. You hurt yourself more each time because you think you deserve pain.