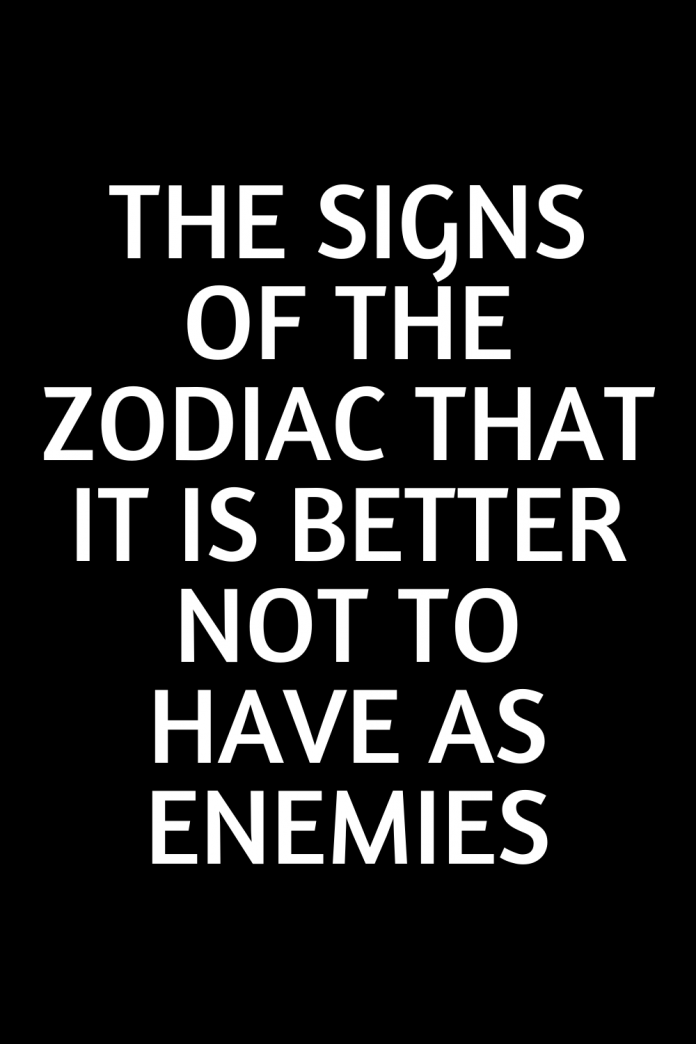 Find out which are the signs of the zodiac that it is better never to make enemies.

When it comes to human relationships it is difficult to imagine how they will evolve. At the same time, it is difficult to predict if an initially peaceful relationship is destined to remain so or if over time it can evolve into something stormy. Relationships are made up of emotions, meeting points but also clashes and with the involvement of two constantly evolving parties, the chances of them changing, for better or for worse, are practically continuous. Thus, it is always good to try to predict the progress of a story, a friendship, or a simple working relationship, to understand how to move today given tomorrow.

For example, knowing right away which people would be better off never antagonizing could be a strength. And since this aspect, in particular, is linked to the influence that the stars have on each of us, today after having seen which are the most selfish friends of the zodiac and how to spend time at home based on the zodiac sign, we will find out what are the zodiac signs that are best never to have as enemies. As always, in these cases, it is advisable to check the profile of one’s ascendant to have a more precise idea of ​​what the future can reveal to us concerning a particular person.

Aries – Medium-Dangerous Enemies
Those born under the sign of Aries are combative people and therefore, when they think someone is stepping on their feet, they tend to take it very personally, risking becoming dangerous. This means that they can act out of spite and that they will not hesitate to move to get what they want, regardless of being able to hurt the enemy in turn. Whether it’s a work colleague, a person with whom they compete, one with whom they are no longer friends, or an ex of theirs, having them against them will not be pleasant at all, especially if you choose to challenge them openly.

Taurus – Enemies Only If Attacked
The natives of Taurus, when they feel attacked they can become quite hostile. While they normally tend to be nice to everyone and be friendly, when they feel they are under attack they can give their worst. When they choose to do this, they generally don’t cause problems and tend to forget about the moments they spent together, no matter how good they are. Generally, they are not signs that it is dangerous to have as enemies but, for sure, they know how to hurt the next species if they have got to know the weaknesses.

Gemini – Enemies only if instigated
Those born under the sign of Gemini are quite peaceful and do not like to go to war with others. Unless they feel instigated it is therefore unlikely that they will turn out to be dangerous enemies, especially because when they bond with someone they struggle to see him differently. So, even if they can get to argue rather heatedly, they will never have the instincts of revenge. And, at worst, they will simply find themselves poking at and distancing themselves from those they once considered friends. In the rare cases, in which they are instigated, however, they can make a difference by closing with a scene but limiting themselves to this.

Cancer – Harmless Enemies Cancer
natives have a pride of their own and this leads them to take what happens with others very seriously. If they feel they have received an offense of some kind, they can become aggressive and start mischievous of all kinds. At the same time, they tend to assume alternating and difficult-to-decipher attitudes. This is especially the case when they feel they have been hurt in pride. Touchy as ever, they will tend to go on without stopping until they get the excuses they think they deserve. While they are potentially unsafe, they tend to be as annoying as a few other signs.

Leo – Dangerous Enemies
Going against those born under the sign of Leo is not very convenient. Double-handedly tied to everything that is of interest to them, they tend to take every challenge, insult, or disrespect very personally. When this happens they do not hesitate to give a hard time to anyone they face and are always ready to declare war. Having won it is for them a necessity for which they are willing to do anything, even to compromise important relationships. Their interest is in fact what comes before everything else.

Virgo – Potentially Dangerous Enemies Virgo
natives are enemies of anyone who decides to openly challenge them. Generally, they don’t like to carry on arguments or relationships based on tension but if they feel that someone is ready to turn against them, they do not hold back. Self-centered like few others, they always need to know that others approve of them and when this does not happen they are ready to go crazy and stiffen to the point of being able to give life to even rather heated fights. Having them as friends can therefore be quite annoying, especially if you don’t like their way of doing which is often aggressive and does not particularly take into account the feelings of others.

Libra – Not too invasive enemies
Those born under the sign of Libra do not like friction and always try to keep calm tones with the people with whom they relate. However, they have pride that leads them to take any offenses very seriously. So when they find themselves in the middle of tense situations, they end up losing their proverbial patience. When this happens they can turn out to be persistent enemies and it is difficult for them to change their minds. Fortunately, they are not very invasive and their degree of danger is not that high unless you hit them in the dearest affections or on topics for which they can lose their minds.

Scorpio – Highly Dangerous Enemies
Of all the signs of the zodiac, the natives of Scorpio are the ones who turn out to be the most dangerous enemies of all. Although they are kind people and always ready to get along with others, they also have very strong personalities and strong ideas that make them particularly strict on certain topics. Thus, if they feel personally affected or, even worse, betrayed, they end up taking it to death, to the point of meditating revenge. This means that whatever happens, they will never forget an affront immediately and will always be ready to make those they consider to be an enemy pay for it. And this can also be true after some time.

Sagittarius – Enemies more annoying than dangerous
Those born under the sign of Sagittarius are very full of themselves and this makes them difficult to deal with. It is therefore very easy for them to come to quarrel with someone even over nonsense. The problem is that they tend not to forget and become heavy and difficult to manage. Fortunately, they hardly ever pose a problem because they tend to disappear rather than take revenge or behave in a harmful way. While they distance themselves, however, they can be quite annoying, among other things letting you guess their inner discomfort. And this although they always try not to show it.

Capricorn – Rarely Dangerous Enemies
Potentially, Capricorn natives are quite dangerous. More often than not, however, they just fantasize about what they might do without ever taking action. This is because they are so caught up in themselves that they don’t even have time to face a possible enemy. A real fortune for those who find themselves clashing with them because in this way they can sleep peacefully. Having said that, it should not be forgotten that if they find themselves having time to spend they can suddenly prove difficult to deal with, especially if they believe they are absolutely on the side of reason.

Aquarius – Harmless Enemies
Those born under the sign of Aquarius can take it to the point of keeping a muzzle even for years but they are unlikely to prove dangerous. This is due to their need to live a quiet life and little, if not completely absent, desire to face someone. If they feel that a person is in any way adverse to them, they prefer to let it go and turn their attention elsewhere. And, the maximum damage they can do is to talk badly about it with others, sometimes even exaggerating and inserting things that are not true. For the rest, however, I am certainly not to be considered as dangerous people.

Pisces – Enemies More Dangerous Than It Appears
The natives of Pisces are quiet people who would like to live peacefully and get along well with everyone. Though thoughts of revenge are not part of their way of being, if pushed to some points that are important to them they can become very dangerous. More often than not, attacking them can lead to nothing. If you accidentally hit something or someone they care about, then they may have an aggressive disposition that is hard to imagine. For this reason, it is much better to keep them close as friends than to make them enemies. Especially since, more often than not, it’s really hard to predict what can make them angry.