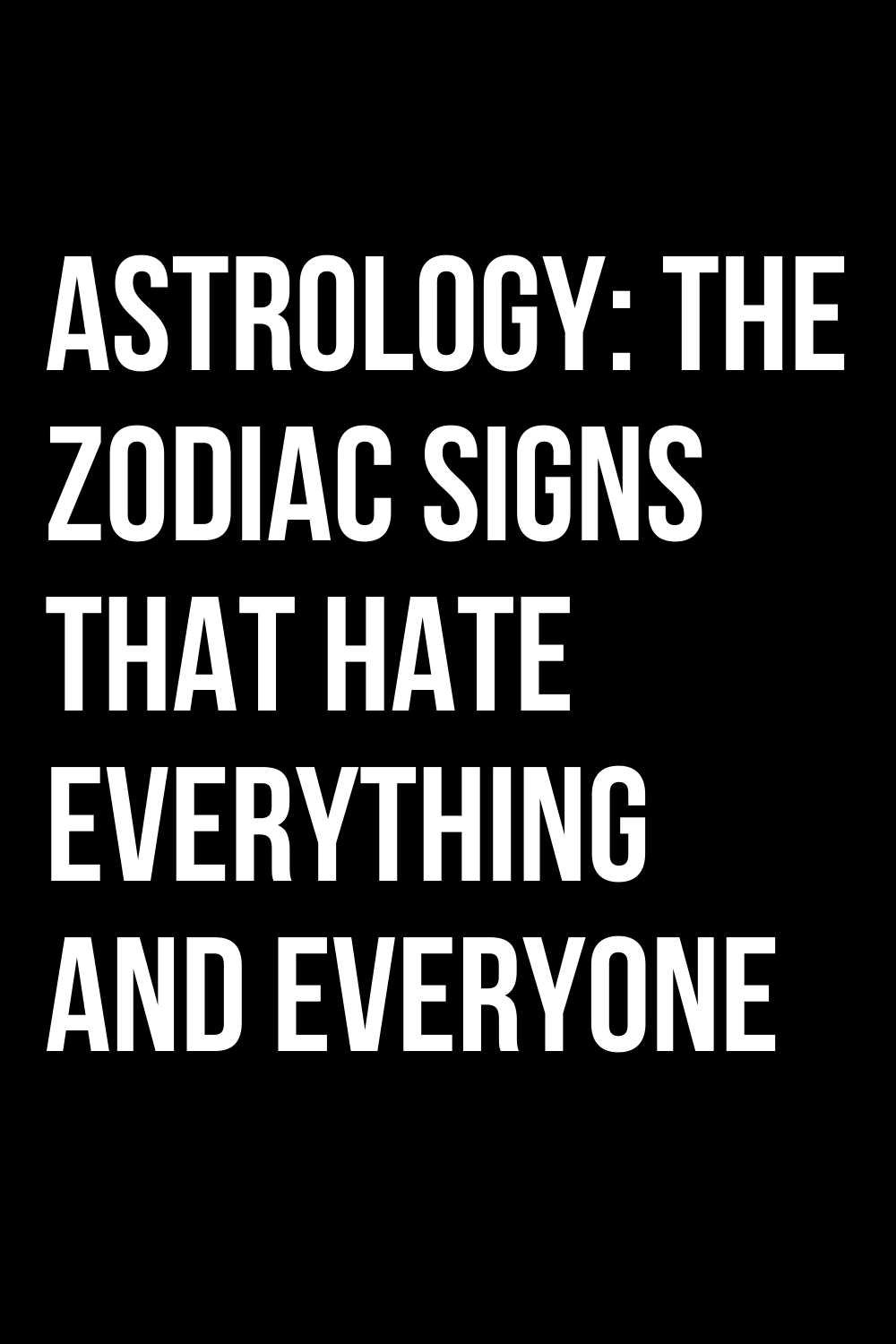 ASTROLOGY: THE ZODIAC SIGNS THAT HATE EVERYTHING AND EVERYONE

Find out which zodiac signs everyone hates and which ones are always proactive.

Human relationships are one of the biggest unknowns in life. Every day new acquaintances are made and among these, some seem more destined than others to lead to friendship or sentimental relationships, others end up in nothing or, even worse, in controversial relationships where antipathy and intolerance towards the other. are the masters. Obviously, in the success (or failure) of certain relationships, various factors come into play, among which the compatibility given by the zodiac signs should not be underestimated.
For this reason, today, after having seen which are the zodiac signs that are not made for long-distance stories and which signs of the zodiac are the most mysterious, we will discover which ones everyone hates and which ones are always well disposed of.

Horoscope: the zodiac signs who hate everything and everyone and those who, on the other hand, are always well disposed towards others

Aries – Those who remain neutral and love those who choose
Those born under the sign of Aries are not among the zodiac signs that everyone hates. Usually, in a good mood, they tend to be sociable with everyone. However, they do not easily bond with others because to do so they need time and common points to share. It can therefore be said of them that while never showing themselves grumpy with others, they know how to keep their distance, truly letting themselves go only with those they believe to be important or at least worthy of consideration.

Taurus – Those who get along with all
Taurus natives always have a serene attitude towards life and this is also true with the people who peer into their life. Although they have an exclusive relationship only with those they consider family, they manage to be extremely cordial with everyone, always establishing pleasant relationships. This happens because their relaxed way of life leads them to be elastic towards the defects of others, strong in the awareness of being able to count on their little world in which no one can enter but those carefully selected and chosen by them.

Gemini – Those who hate and love based on mood
Unpredictable as ever, those born under the sign of Gemini have no stable way of relating. For them, it is always all black or white and extremely dependent on their mood. So, if at times they may appear well disposed towards everyone, at others they end up being rather acidic. On the other hand, they are so sociable that they enjoy everyone’s sympathy and for this reason, despite their mood swings, they always manage to have a good social network. This is made possible thanks to the fact that it is enough to know them a little to understand that when they act in a surly way it is only because they have a bad moon and there is nothing personal.

Cancer – Those who love only those who love them
Getting into the graces of the natives of Cancer is not a difficult thing. They are people who do not love and do not hate instinctively but who value people based on how they behave with them. This means that if they know that they matter to others or that they like them, they will always have an eye on them. On the contrary, when faced with a hostile attitude, they will show themselves grumpy and touchy to the point of being able to even go to war. They are therefore people who love and hate everyone but only in response to feelings and, in particular, to the treatment that is given to them.

Leo – Those who love everyone
born under the sign of Leo are people who take life in a sunny way and who therefore almost always have a positive approach towards everything and everyone. This way of making them appear as friendly and easygoing people even if it must be said that many times theirs is just a facade. If caught off guard or opposed, they end up showing another part of themselves, certainly less cheerful and able to surprise those who, discovering it for the first time, find themselves unprepared. That said, unless they get to the fight, they always try to be available, even though they are less directed at others than they try to show themselves.

Virgo – Those who hate all
Virgo natives, pessimistic as they are, rarely have positive ideas about those around them. For this reason, they often and willingly find themselves having grumpy attitudes towards others, showing themselves critical to the point of unnerving those who have to do with them. For this reason, they do not always enjoy the sympathies of others, and even if many times, trying to enter their world you can find them much more willing than they appear. Having said that, they remain hypercritical and so rational people as to be poor in impulses towards others and, suspicious by nature, they are certainly among the zodiac signs that more easily than others, find themselves hating everyone.

Libra – Those who hate only enemies
Those born under the sign of Virgo have a relaxed approach to life and the people who are part of it. For this reason, they never have impulses towards others if they cannot first say that they know them. When this happens, they decide based on their feelings, establishing who they are to open up to and who they don’t like. More generally, that is, before getting an idea of ​​others, they always tend to be kind and helpful, so much so that they easily enter the sympathies of others. Posed and relaxed, they always appear in tune with the world around them to the point of being always sought by everyone, sometimes, absurdly, even by those who can’t stand.

Scorpio – Those Who Before Loving or Hating Must Know
The natives of Scorpio always have a very personal way of dealing with things and life itself. Usually positive, they try to never let go of extreme outbursts for fear of making mistakes and regretting them. For this reason, they limit themselves to being friendly to everyone while they study them sideways. To say whether they love or hate others, however, situations should be analyzed on a case-by-case basis. Reserved like few others, they find it difficult to open up to the outside but at least on the surface they always try to give their best. We can therefore say of them that they do not love and do not hate but that first of all they try to get to know people and then understand what they feel they are doing.

Sagittarius – Those who love everyone but in a superficial way
Those born under the sign of Sagittarius are sunny and always cheerful and therefore looking to make new friends. This way of leading them to open up to everyone and show themselves so expansive that they are considered people who love everything and everyone. In reality, however, their way of being is only on the surface because it takes a long time to love someone. The truth is that they like to be considered as pleasant and sunny people and to maintain this image they always try to give their best, only to begin to discover themselves little by little when they reach certain confidence.

Capricorn – Those who love halfway
The natives of Capricorn do not usually love everyone a priori but they like to have relaxed relationships with others, which is why even when they do not have a precise impression on those around them they tend to be kind. Their way of doing things, however, tends to change easily, so much so that at times they can even appear grumpy. This partly depends on their mood and on the fact that they often allow themselves to be influenced by others, suddenly changing moods. They are therefore people who basically love everyone but never completely and who even for no apparent reason can suddenly show themselves hostile, showing a tendentially moody character in this respect.

Aquarius – Those who hate everyone
Who better than those born under the sign of Aquarius can be among those who hate everyone? Not at all fond of social interactions, they have a sort of propensity towards others to reject any type of approach. This makes them appear tough and distant and, of course, downright unsociable. Which they are aware of but it doesn’t seem to upset them at all if, in return, they can have the privacy they want. When in their world, they are willing to let in only those they deem compatible and usually can be counted on the fingers of one hand.

Pisces – Those who love all
the natives of Pisces, unlike those of Sagittarius, are people always well disposed towards others and led to think positively. This always makes them kind and cordial and this, thanks also to their empathy, makes them loved by everyone. The way they are does not mean that they are ready to accept everything but that as long as they are not disappointed or betrayed they are willing to see the best of the people around them. On the other hand, they are good at recognizing strengths and obvious defects. Having them on your side, therefore, is an act of esteem which we should be happy and never take advantage of because if they stop loving it is forever.