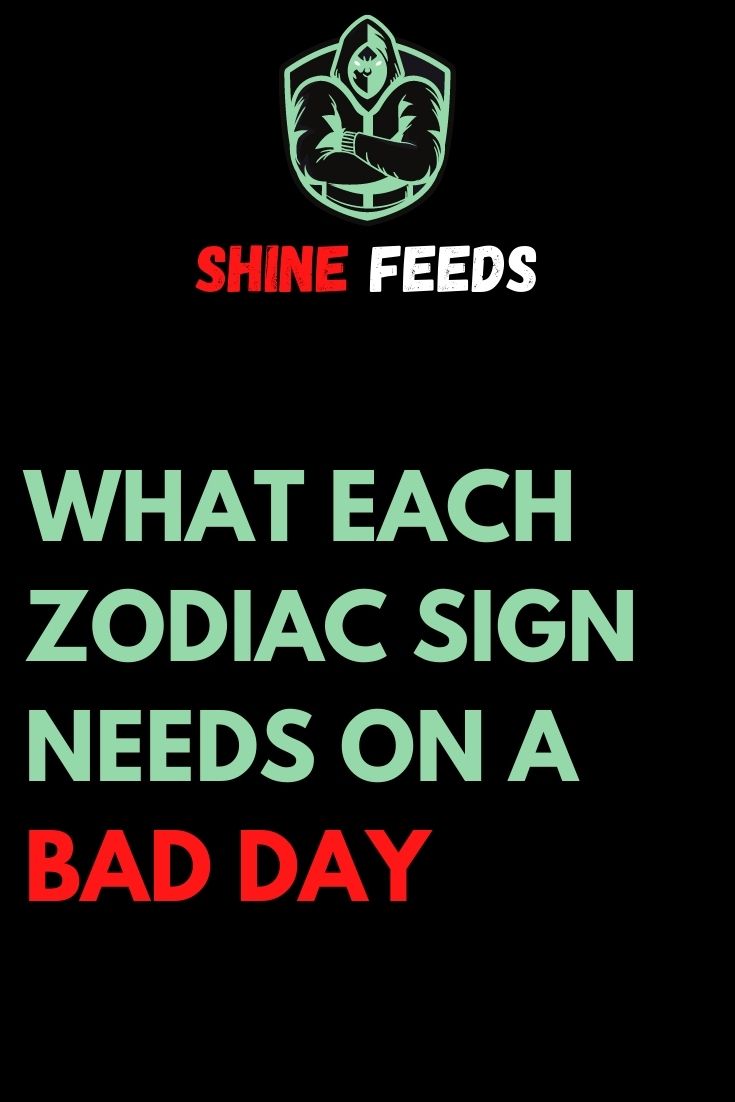 WHAT EACH ZODIAC SIGN NEEDS ON A BAD DAY

Aries: To do something physical

Maybe it’s going for a run, hitting the gym, having s*x, or even something simple like playing an aggressive video game. Anything that lets them take their frustration and actually do something with it. If they can find a way to tangibly release that stress, their mood will change before they know it.

Taurus: To pamper themselves

When they have a rough day, a Taurus knows that the best thing they can do is pamper themselves. Whether they hit the spa, get their nails done, or simply retreat at home into a hot bath with a glass of wine, a bad day can’t mess with them too long once they’re able to relax.

Gemini: To message their group chat for a distraction

Geminis are known to be well connected, and while they are independent and explorative on their own, they almost always have some sort of existing core group of people to talk with. When they’re having a bad day, if they can get connected to a couple of their friends and start some kind of funny or interesting group chat, they’ll feel their spirits lift before too long.

Cancer: To have a venting session with a loved one

Cancers are used to being the caretakers, so it isn’t always easy for them to say something when they’re going through a problem. Yet if they have a trusted loved one, all they really need is to get all their emotions on the table. Once they are able to actually say their issues out loud, they’ll find they feel so much lighter.

Leo: To be reminded of their good qualities

While Leo usually has enough confidence for everyone, that doesn’t mean they’re immune to bad days. When one hits them, it’s not uncommon that their self-esteem takes a hit. While they might know deep down what their strengths are, it’s beyond helpful for them to hear from someone else about their good qualities. It’s a reminder that other people see them for their greatness, and that they aren’t making it up in their head.

Virgo: To focus on making the rest of their day the best it can be

Libra: To have their best friend(s) take them out

Libras are often stereotyped as not wanting to be alone, but this does hold true when they’re having a bad day. They need a shoulder to lean on, someone to tell them everything is going to be okay and that they’ll make it through. Who better to help them back on their feet than their best friend?

Scorpio: To take a private getaway

It can be tempting for a Scorpio to lock themselves up in their homes when they’re dealing with a tough time. However, when they’re having a bad time, a Scorpio honestly just wants to take a trip by themselves- go somewhere where no one knows their name or who they are. Maybe they’ll interact with people for a distraction, or maybe they’ll just revel in being far from their stress, but regardless they’ll feel their mind relax when they can be alone in a different place for a while.

Sagittarius: To go on a road trip to…basically anywhere

Much like Scorpios, when a Sagittarius is having a bad day, they find themselves wanting to take off somewhere. They aren’t afraid to go out alone, but they also won’t be opposed to their friends tagging along- just as long as they can keep up. They’re interested in exploring unknown territory, clearing their minds, and focusing on more positive things than what they are having to deal with.

Capricorn: To be reminded and affirmed of their achievements

Capricorns can place a ton of pressure on themselves and deal with bad days fairly often. Whenever everything gets to be too much, a reminder of all the things they have accomplished can do wonders to change their mood. If they can hear someone affirm their positive qualities, it’s only a bonus.

Aquarius: To have someone to discuss the newest philosophical theory with

Despite that they may not enjoy admitting when they’re having a hard time, even an Aquarius knows they aren’t exempted from such a situation. Whenever they do acknowledge it, the best thing to bolster their spirits is to talk about the other issues going on in the world. While it might sound depressing for some, an Aquarius uses it as a reminder that the world is bigger than just their own issues, and it gives them a chance to really explore bigger ideas and complex theories with others instead of pondering them alone.

Pisces: To have someone to check up on them

Pisces have a bit of a reputation for checking in with everyone else when they can sense they have a problem. They’re deeply in tune with their own emotions as well as the emotions of those around them. Whenever they’re having a bad day, they aren’t afraid to face their emotions, but they tend to prepare for doing it alone. The best thing that could happen for them is to have someone check in to see how they’re doing. They don’t want to bother others, but if someone takes the time to talk with them through a bad time, they’ll feel better instantly.