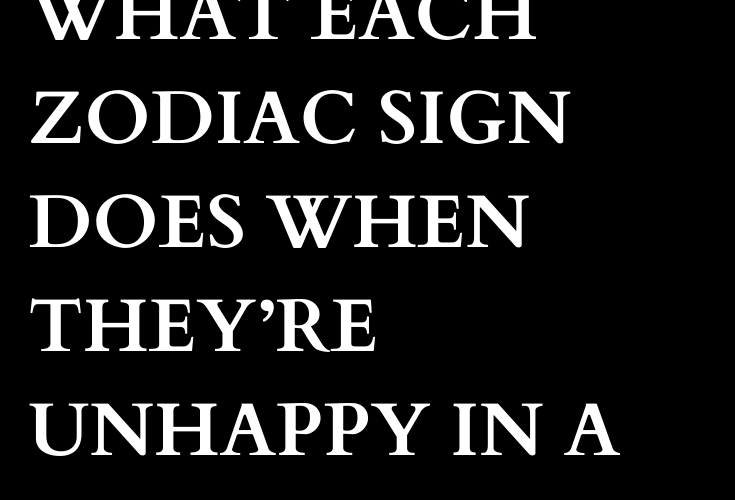 When Aries personalities slowly start shutting you out of their lives, it means they’re not very happy about the direction of your relationship.

They will just start acting colder to the point where you will wonder if you’re still even in a real relationship.

They will usually be communicative and will be open for discussions and opening up, but if they stop sharing their feelings, thoughts, and moods, then something is wrong.

Whenever a Taurus is feeling particularly unhappy in a relationship, they become overly-invested in making their lives appear as “happy” as possible.

The image that they project to people will be of utmost importance to them. They will exaggerate the happiness in their lives by showing off on social media and in real life.

They will bombard your social media feed with happy photos and selfies in an effort to conceal their true unhappiness.

Once Geminis are not satisfied in their relationships, they will accidentally affect other spheres of life in a bad way.

They will screw up work, their social circles, etc. It may be because of the fact that they get heavily invested in their relationships and can’t fathom the thought of being in a dysfunctional one.

They do everything they can to release their pent-up unhappiness without having to actually address or fix the reason “why”. Any heavy lifting when it comes to fixing the problem is a big no-no.

A Leo in an unhappy relationship will want to espouse a level of fierceness and brutality that you may have never experienced before.

When something in their personal lives isn’t aligned with their deepest truth, they become very insecure, lash out, and eventually just start trying to move on.

Virgos will try to distract themselves as much as possible. They will throw themselves into anything new and engage in other hobbies or points of interest.

Virgos are passionate by nature, but they’re also easily paranoid. If a Virgo you know is suddenly taking on too many new hobbies, it may be a sign of their unhappiness.

Libras will immerse themselves in their work and their careers whenever they feel like their relationships are in trouble.

A Libra is known to be quite the workhorse. On the other hand, they are extremely productive, so there are at least some upsides in all their troubles.

They are the synonym for intensity. There are very few people on Earth who are as intense as the Scorpio people are.

But when they are unhappy in relationships, they honestly won’t be able to carry on with it for long. Their emotions will rip through them too quickly.

Sagittarius personalities take passive-aggressive approaches in dealing with being unhappy in relationships.

They have outbursts that seem to come out of nowhere, or inappropriately channeled fits of anger, and have the tendency to get very irate over even the simplest of matters.

Capricorns are control freaks. They try to identify the problems and work on them, even if in reality, the relationship probably is not possible to fix.

That is why they will start freaking out immensely whenever they find themselves being unable to control the sad state of their relationships.

Aquarians are rather dramatic creatures. They come up with big, grandiose dreams and goals, and actually pursue them.

They move to other countries, begin businesses, or start other impressive ventures.

When they feel unhappy, they will become the most selfish people you will ever meet. Not caring enough and more often than not, just letting the relationship die by itself.

Pisces get very uncomfortable fairly quickly as compared to others. They don’t like to be tied down by anything that makes them feel unhappy.

They may claim that they love you, but if their imaginations begin to wander past building a life with you, they’re not completely happy deep down.

They will start devoting most of their time and energy to other things in the hopes that their sad states in the relationship will die a slow death.