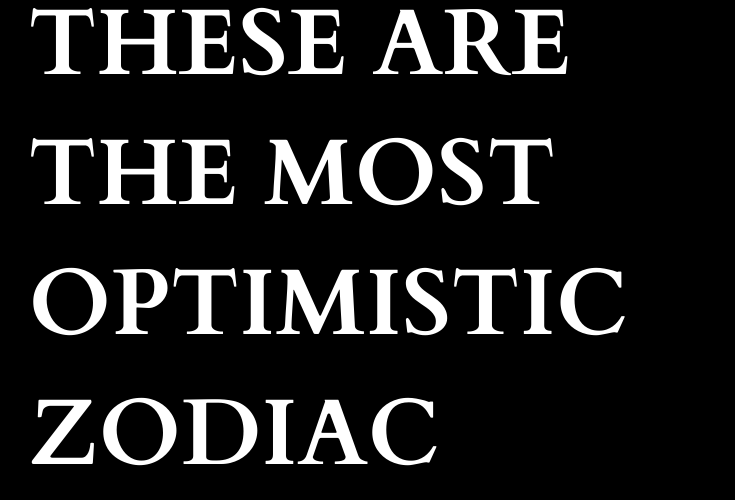 These Are The Most Optimistic Zodiac Signs

They may be straight forward when they speak, but it’s hard to beat the unbridled enthusiasm of a Sagittarius. They are often skilled at seeing all the possibilities, but they fixate on the positive aspects and avoid the more discouraging ones. It’s not that they are unrealistic- they just don’t see the point in focusing on what could go wrong when so much can go right. Plus, given their sense of humor and preference for handling heavier subjects with light-hearted jokes, it’s no surprise that being around them lifts other’s spirits.

Insists on seeing the positive in everyone. Pisces are known to be some of the dreamiest people in the zodiac, and their desire to encourage and imagine a better reality makes them extremely optimistic people. While they may wrestle with their own emotions, they still prefer to focus on the bright side of various situations- they know the world has the chance to be better if people want to put in the effort.. Plus, their sense of empathy allows them to find the good in others, even if it seems hopeless.

Libras are similar to Pisces in their dreamy demeanor- they imagine a better world for others and believe with their whole heart it’s possible to achieve. Perhaps you can blame this on their aversion to conflict, but Libras don’t want to look at the negative aspects of a situation unless it’s absolutely necessary. They would much rather focus on what good can be found, or what positive results can come from whatever is going on. Plus, with their desire to keep things harmonious and for others to get along, it’s no surprise that they will lean on cheerful spirits and optimistic attitudes to keep everyone happy.

Aries understand that life won’t always be easy, but they also don’t believe in throwing a pity party and wallowing in disappointment. Aries are full of energy and they take challenges head on. They know that things may be difficult in the moment, but that the only place to go is up. They will throw themselves into tackling the hard situation, and encourage everyone else not to give up in the process.

Leos are charming and kind, they believe the world is at their fingertips- and their confidence usually means they are right. While some might view a Leo’s belief in themselves as arrogant, it’s that exact mindset that causes them to see things in a positive light. They have a big heart and infectious spirit that allows them to set their eyes on what can be accomplished rather than in ways they can fail. Even when hard times do show up, their strength and can-do mindset pulls them through and prevents them from staying down for too long.