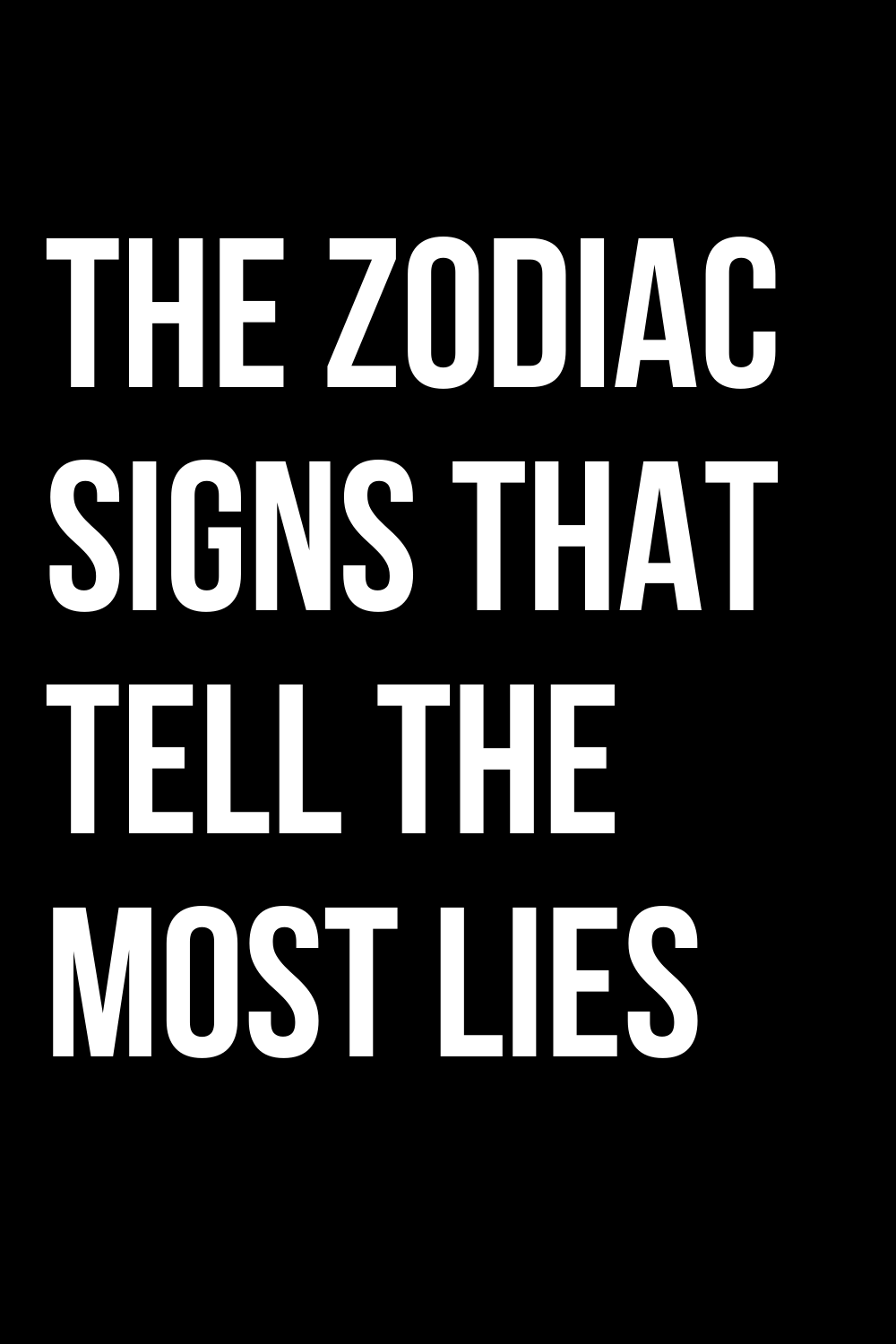 THE ZODIAC SIGNS THAT TELL THE MOST LIES

Find out which zodiac signs tell the most lies and whether they are good or bad lies.

When we talk about lies we enter a real minefield. We all find ourselves talking about it, sometimes without even realizing it. Of course, in many cases it is the so-called “white lies” that is said for a good purpose, in others a different version of the story is told to make it sooner or to cut it short but also with all the appropriate justifications, the fact remains that she told herself a lie. Probably, if we stopped to consider even the smallest ones, we would come to discover that in one day the lies spoken exceed the fingers we have in one hand while for others, perhaps, the account would be lost after a few hours. Since lying or omitting truths is an aspect that is somehow influenced by the stars, today after seeing which are the most suitable zodiac signs to change jobs and which are the ones who turn out to be excellent friends in love, we will see which are the zodiac signs that lie the most and how they do it.

This is how much the various signs of the zodiac lie

Aries – Few lies but well constructed
Aries natives don’t tell many lies because they don’t pay much attention to what others think. Even at the cost of hurting those in front of them, they, therefore, prefer to be direct and say whatever is on their mind. At the same time, they tend to think about their interests all the time, and this sometimes coincides with having to hide actions done such as betrayal, a sudden change of plans, or other actions that they know would cause them problems once discovered. For this reason, if they feel threatened in some way they tend to lie but it is mostly omissions or small lies that they then carry around without too many problems, keeping the same version practically forever. Unless you get caught, of course.

Taurus – Many little lies
Those born under the sign of Taurus do not like to tell lies but they do it without too many problems if it suits them. They are usually small lies that mostly concern things they have done or that, on the contrary, have forgotten to do. A habit that they have been carrying for a long time and in which they tend to become familiar with the passing of the years. Discovering them can be difficult because they manage to keep a fairly neutral expression and usually tell vaguely altered truths, so as not to run the risk of being contradicted. A way of doing that makes their lies well constructed.

Gemini – Lies Sparse But Frequent
Geminis lie and know they do but theirs is not a real lie, which is why they rarely feel guilty. For them, it is mostly a matter of altering things a little to make them understandable to whoever is in front of them. This way of doing it leads them, however, to do it practically continuously, coming to build real castles of lies and all without almost realizing it. Only once they have their backs to the wall will they realize that they have let themselves be carried away, admitting what is not true and showing themselves more sincere. Until the next lie.

Cancer – Several well-calculated lies
Cancer natives have a strange relationship with reality. Eager to always make a good impression, they tend to modify it to their liking so that they stand out in the right way. Generally, they do not tell real lies but they change things and they do it in a so realistic way as to give life to real alternative realities in which they end up identifying themselves, believing in them, and making them true. In this way, understanding when they lie is really difficult. It is, therefore, useful to keep in mind that in a day they can even lie several times and many of these without even realizing it.

Leo – Very Few Lies
Those born under the sign of Leo are so sure of themselves that they don’t have to resort to lies to win the favors of others. When they want something they worry about taking it without asking themselves any kind of problem, which is why they end up being quite honest. Of course, as everyone has their so-called “white lies” for which they do not feel the least bit guilty and which they consider more than fair to live peacefully with others. Aside from that, they are among the zodiac signs that tell the least lies.

Virgo – Few Lies and Many Omissions
Virgo natives are not inclined to tell lies mainly because they tend to always say what they think, partly because they don’t like having to remember any lies, and mostly because they don’t care about making a bad impression on others. Sometimes, however, due to tiredness or a lack of desire to discuss, they tend to omit things they know could lead to long debates or put them in a bad light with people towards whom they feel the need to be in a good light, both for affection and situations. work or that lead them to need their consent. From the natives of this sign, therefore, unspoken things are to be expected but rarely true lies.

Libra – Few Well Spoken Lies
Those born under the sign of Libra are among the least lying signs. Their lies are only for convenience and never so big that they can become a problem. Sometimes they “forget” to say something or avoid going into details that could prove uncomfortable. That said, they turn out to be quite sincere people so much so that when they are forced to tell a lie they feel a deep sense of unease that can be easily grasped from the outside.

Scorpio – Enough Lies
It cannot be said that the natives of Scorpio are among the most liars in the zodiac but they certainly rank well in the rankings. The point is, when they lie, they’re so good it’s really hard to find out. They would know how to carry on a lie even for a lifetime and everything without ever being discovered. This is due to their ability to build them in a workmanlike manner and the fact that when they choose to do so it is because they believe there is a real need. Otherwise, they prefer to be honest, perhaps remaining vague but without telling stories just for the fun of it.

Sagittarius – Many little lies
Those born under the sign of Sagittarius are among the zodiac signs that lie most often. Although they profess to be sincere and want to be, when they find themselves in situations that they cannot manage, they end up being the first to lie. On the other hand, this leads them to always be suspicious of everyone and to fear that others are not sincere with them. Anyway, when they lie they never do it completely but they try not to invent too big things and then forget about them to betray themselves if they are asked more questions than expected. Discovering them, therefore, is often quite easy.

Capricorn – Many Lies
Capricorn natives are one of the most lying signs of all. Their lies are always handy and are born first of all to get out of situations that they consider dangerous and immediately after not to have to give too many explanations when they feel they do not have the time or, more simply, they do not feel like it. This way of doing things comes from a need not to have problems on the outside and to always feel at ease with others. If they know they are risking a fight, for example, they avoid telling the truth, making excuses, or constructing a well-concocted lie that they would be able to carry on even after being discovered.

Aquarius – Lots of Lies
Those born in Aquarius are the most liars in the zodiac. This comes from a strong need to live peacefully and without problems that can be avoided. When they feel that a lie can be convenient for them, therefore, they prefer to let it pass by avoiding telling the truth. A way of doing that they implement almost automatically and without posing any kind of problem. Even getting caught is not something that bothers them except for the part of having to argue or argue. Their ultimate goal is not to have to give explanations by living their lives as they prefer.

Pisces – Very few lies
Pisces are sincere people who do not like to lie and who prefer a fight rather than a serenity behind which lies hidden. For better or for worse, therefore, they are always ready to act by telling the truth. The only kind of “lie” they take into consideration is the one for a good purpose and told so as not to make someone suffer. Even in that case, however, what they do is limit themselves in giving information or sweetening a too crude truth. They will hardly hide behind a lie because it is a way of doing that they do not accept in others and which, consequently, they do not want to be the first to implement.