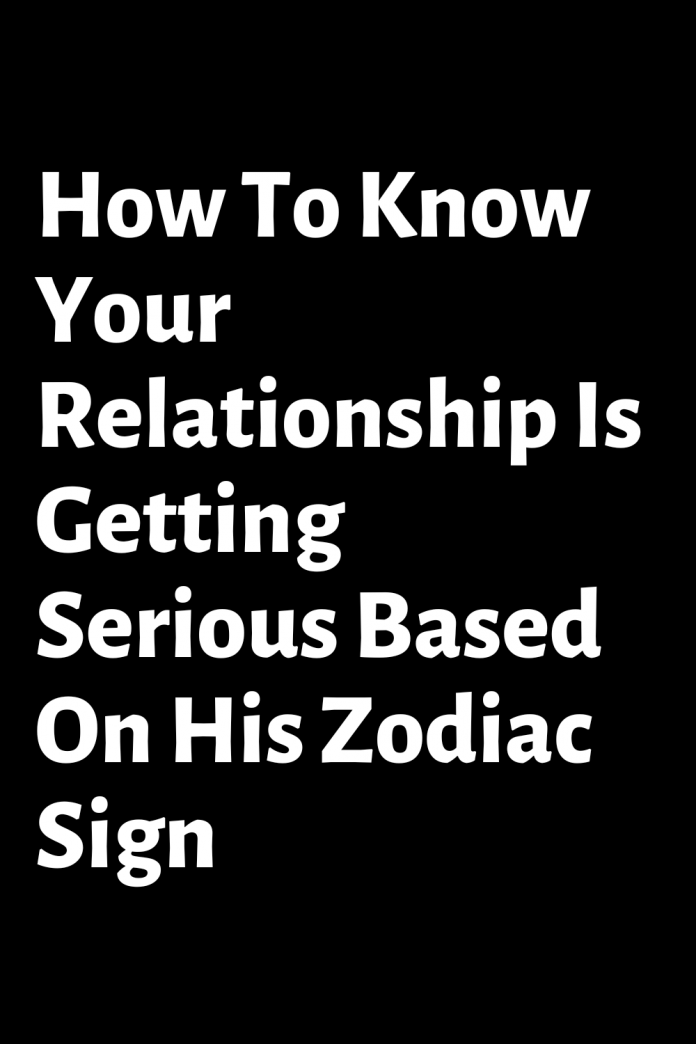 It’s hard to read all the cues and signs in a relationship. Luckily, astrology has found a way to make this easier for us.

Every man has a different approach when they decide the relationship they are in is getting serious.

Take a look at what men do when they are truly interested in a girl, according to their zodiac sign.

You’ll know your Aries man is truly connecting with you when he decides to tell you he loves you.

He’ll probably just seemingly blurt it out of nowhere. It doesn’t mean he’s ready to make any huge changes in your relationship but it does mean he’s serious about you.

Your Taurean will show you he’s serious about you by showing you his real, everyday self, far away from the romantic dinners he usually arranges for your dates.

He might take you on a trip or bring you home to meet his family.

When a Gemini is serious about you he’ll probably start posting your photos on social media.

He doesn’t waste time introducing the girl he’s dating to his whole social network unless he feels like she’s someone who’ll be around for a while.

Our sensitive Cancer is afraid of being hurt, so when he decides you’re the one he’ll start labeling your relationship. When you hear him say ‘’we’’, you can be sure he’s super serious about you.

A Leo will always want you to think he’s the best at everything, but once he gets serious about you he will be fine with showing you his vulnerabilities.

When a Leo lets you see him cry or be super sad about something, you’ll know he is not fooling around anymore.

For a Virgo, commitment is shown by caring for another person’s well being.

If your Virgo starts to call you or send you messages throughout the day just to check how you’re doing and what’s going on with you, you’ll know that you have him hooked.

When a Libra stops following his everyday harmonious routine just to spend more time with you, you can be certain he is getting pretty serious about your relationship.

He usually has a hard time changing his well balanced schedule, so doing that for you is certainly a good sign.

You’ll know your Scorpio is 100% serious about you when he spends the night at your place just watching movies or sleeping in the same bed.

For him, physical experience is most important, so if he shows you he wants you for everything else, you’ll know you’ve won him over.

A Sagittairus who’s getting serious about a girl (which doesn’t happen too often) will start making plans with her.

So, if you hear your Sag saying things like ‘we should do that next month’ be absolutely certain that this boy is head over heels for you.

A Capricorn hopes for a serious relationship but still won’t just settle for anyone. If he starts thinking you might be the one, he will most likely introduce you to his family and friends.

This is a huge step for him and definitely means you’re special to him.

When an Aquarius starts treating you like his absolute best friend, that’s when you’ll know he’s serious about you.

It’s hard for him to be involved in a serious relationship, but when your late night talks turn into real friendly discussions that last for hours, that’s when the magic will happen.

A Pisces man is a hopeless romantic but a cautious one.

When he feels confident enough to invite you to hang out with his closest friends and calls you his ‘girlfriend’ in front of them, you’ll know that he’s letting you in and hoping to start a serious relationship with you.