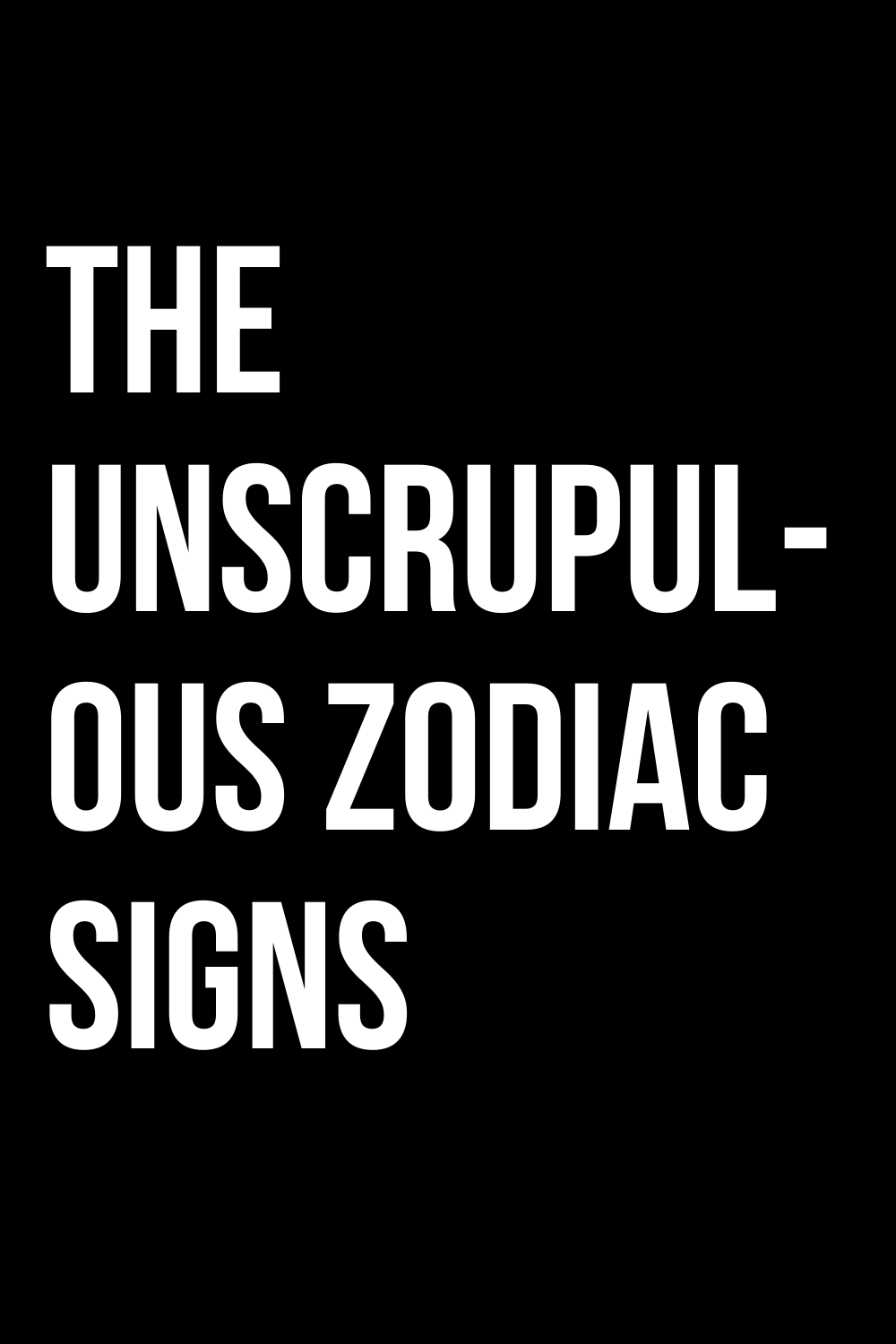 Find out which signs of the zodiac are unscrupulous and which ones tend to have too many.

When you meet someone new, the first tendency is to try to grasp their essence to understand if they are a person you can trust or who in the long run can reserve even unpleasant surprises. It is an almost instinctive way of doing things that many set in motion after having suffered some disappointments but which at times, due to wrong first impressions can lead them to trust the wrong people anyway, perhaps moving away from sincere and more suitable ones. The truth is that the only way to get to know someone well is to hang out with them for a long time and observe how they behave in the various circumstances of life. Because words can never tell a person as much as facts can. Wanting to try another way, one way to know at least the salient features of a person is to interpret his zodiac sign, relating it to his experiences and to how much he is influenced by the stars. And since in relationships, among the most dangerous people there are those without scruples, today after having seen how the various zodiac signs react when they feel envy and which are the most faithful zodiac signs, we will investigate those unscrupulous and those who tend to have them, summarizing at the end which is the four most unscrupulous of all.

Horoscope: With or without scruples? Here is the truth about the various zodiac signs

Aries – Unscrupulous
Those born under the sign of Aries are not people who tend to have a lot of scruples. When they have a goal in mind, they aim only for that and tend not to care about the consequences. Any accidents along the way or suffering inflicted on others are perceived as a price to pay to achieve what you most want. For this reason, you cannot rely on them in particular, but on the contrary, it is always good to keep your eyes open, especially if you find yourself competing for something for some reason. In those cases, they know how to give their worst.

Taurus – With Various Scruples
The natives of Taurus have a very humane approach to life, usually dictated by good intentions. While they are always ready to fight for a good cause, they tend to ask themselves doubts and questions about how legitimate it is to push themselves and what is right to do to get things done. Of course, if cornered they are more than able to silence all kinds of thoughts to devote themselves to action, however, when they can, they try to think about everything else too, showing themselves to be human people and always ready to look for a way to go. good for everyone or at least not hurting others too much.

Gemini – With fluctuating scruples
As is typical of their way of being, those born under the sign of Gemini tend to have scruples practically every other day. If they feel loved and understood, they are more likely to worry about others and feel well disposed towards the needs of others. When things are not going well or they somehow feel victims of an unpleasant situation their level of empathy tends to diminish and if they understand that they are one step away from what they want they can go further than they usually would to get it. . An attitude that they would not, however, put in place towards people they care about because friendship or feelings play a particularly important role for them.

Cancer – With Scruples
It is difficult to understand how many scruples the natives of Cancer have. Their way of seeing things is so personal as to leave room for various doubts. From a certain point of view, it can be said that they tend to have scruples, especially when at stake is the happiness of the people they love or what people may think of them. If they know they get away with it, however, they can get to move for the sole purpose of getting what they want and all without feeling the least bit guilty. If there is one thing they are good at, it is telling themselves half-truths that they can fully believe in.

Leo – Almost completely unscrupulous
As much as they love to always appear lavish with attention to others, those born under the sign of Leo know very well how to go their way without looking at anyone and if they get the chance they are more than ready to do it. When it comes to being first at something they can go way beyond the imaginable and all without the slightest sense of guilt. If you have to do with them, therefore, it is good to remember this detail because if in times of peace they prove to be kind and pleasant to hang out with, when things go wrong their first reaction is to think only and exclusively of themselves. and, at most, to the people they care about.

Virgo – With some scruples
Virgo natives are people who, if pushed to action, know how to put aside feelings of guilt and scruples of various kinds. If they can, however, they always try to avoid it so as not to have to deal with their conscience that sometimes emerges unexpectedly, taking them off guard. Skilled in implementing various types of strategies, they know how to assert themselves in the workplace, presenting instead various shortcomings when they have to do with relationships. If you are in a close relationship with them then you do not run great dangers but if the relationship is of simple knowledge, then it is advisable to keep your eyes open.

Libra – With variable scruples
Those born under the sign of Libra have a very personal way of experiencing remorse and guilt. Generally, they are very attentive to the needs of other species if they have relationships of some kind with them. If they feel in danger, however, they know how to close themselves off to various emotions, getting tough and starting to think only of their interests. To be honest it is not a modality that they live feeling at ease but still manage to carry it forward, aware of the fact that in life there are moments in which you can relax and get along with everyone and others in which instead it is necessary to fight and give everything to achieve your goals.

Scorpio – Potentially Unscrupulous
Scorpio natives are people who in nature would be pretty much perfect for getting whatever they want without having to worry about it. Yet on their side, they have a conscience that makes them human and allows them to never go beyond the point of no return and all to maintain a good opinion of themselves. It must be said, however, that all this is valid only in times of peace. If they feel betrayed a thirst for revenge is triggered in them that makes them the worst enemies you can have, really ready for anything and, in this case, definitely unscrupulous. Excellent to have as friends but absolutely to be feared otherwise.

Sagittarius – With very few scruples
Those born under the sign of Sagittarius are so caught up in themselves that they don’t care much about the feelings of those around them. This leads them to always live on the borderline of scruples which, although present, do not seem so strong as to prevent them from living the life they want. All this takes on an even deeper meaning in the workplace where they usually always put themselves first, considering everyone else as rivals. Dealing with them, therefore, depends on the context and the type of relationship that you can build. When in doubt, it is better to always be on the lookout for who goes there and never lose sight of them.

Capricorn – With false scruples
The natives of Capricorn are people who have many scruples and who boast a conscience that can always show them the right path to take. In reality, they are so good at lying and telling each other lies that they often and willingly cross the line that separates good deeds from those that are not at all. It cannot be said that they move unaware of what they do but that they prefer not to see and tell it to each other, making others believe their version too. A situation that can also become quite complex and therefore it is better to always keep it under control. Just to make sure you don’t fall for their half-truth game.

Aquarius – Almost unscrupulous
Those born in Aquarius are eccentric and highly self-centered people, for this reason, it would be a lie to say that they are inclined to have scruples. The truth is that they can demonstrate a more sweetened reality than that which surrounds them and which they help to create. For this reason, their game can become much more dangerous than you think at first glance. Much better to avoid conflict situations with them, because getting out of them calmly would be practically impossible, at least as much as it can be to convince them to do something that they do not believe is in their hearts.

Pisces – With too many scruples
The natives of Pisces are so projected towards others that they are people who can have too many scruples. The empathy that distinguishes them and the desire to always know everyone is happy makes them too sensitive people and always willing to act in the right way both for themselves and for others. Receiving rip-offs from them is difficult because they are kindhearted people who love and respect the people they consider important and who prefer never to do wrong with others. However, they are very acute people, and their way of being should not at all be seen as a reason to take advantage of them because even if they pretend not to notice it they will notice it immediately, starting to move away until they finally close any type of relationship.