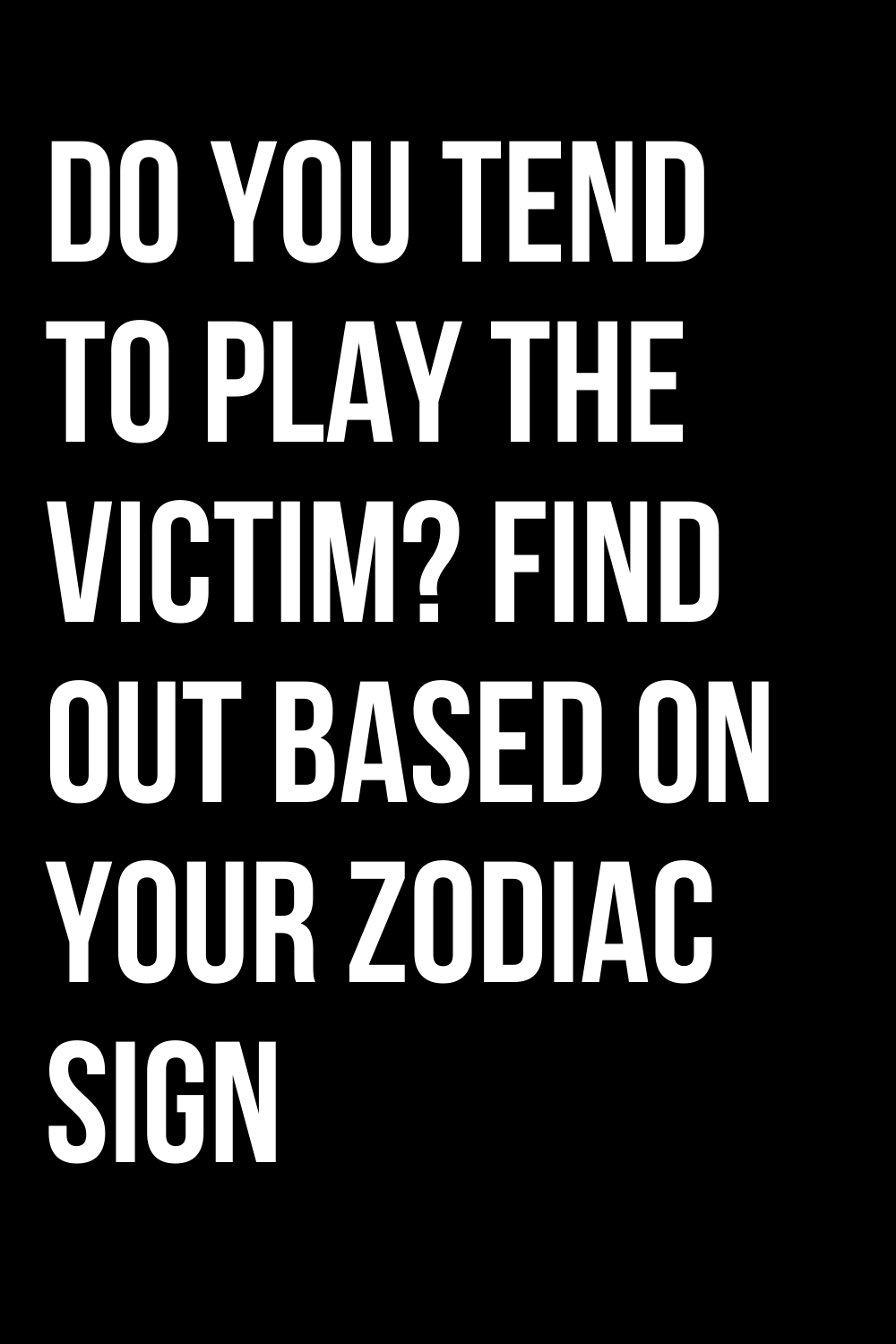 DO YOU TEND TO PLAY THE VICTIM? FIND OUT BASED ON YOUR ZODIAC SIGN

Find out if you are one of those people who tend to be victims or if you always deal with situations your way.

Each of us tends to face life in a different way, both in character and in the way we feel and live our emotions. Generally, in the face of difficulties there are two ways of acting, that of facing them without thinking about how to solve them and that of breaking down, thinking that you are at the center of some cosmic mess or that you have attracted all the misfortune of the world. The latter way of doing belongs to those who tend to make or feel like victims , a way of being that often also suffers from the influence of the stars.
So today, after seeing what the new year will be like and  whether or not we are suitable for having a friend in bed , we will find out if in life we ​​tend to feel like victims.

Do you often feel like a victim? Here is the answer of the stars.

Aries – Never
Your way of dealing with things is decidedly unscrupulous. If something bad happens, your confidence in your abilities leads you to think that it is always the fault of others and this even when you too may have contributed to creating the problem. In your eyes, however, it is really difficult to show how things are and this leads you more often to judge others rather than yourself or your life. So, no, you are certainly not a person who tends to do or feel like a victim but you certainly should try to consider that sometimes you too could be on the other side of reason.

Taurus – Rarely
When you are faced with a problem your priority is to solve it and you know that to do this you need to concentrate fully without letting negative thoughts affect your decisions. For this reason, even in the worst situations you tend to bring out your practical and decisive side, taking the situation head on and facing it as it deserves. A way of doing things that you have had since childhood and that makes you feel confident in yourself and in your work.

Gemini – Based on your mood
As often happens, the way you act or think depends on how you feel at the moment. If you are in your bad days, in fact, victimhood tends to be part of you, expressing itself with endless complaints and with long faces due to the fact that you often feel at the center of a conspiracy that tends to hurt only you. If, on the other hand, if in a good day things suddenly change and your desire to do takes over, allowing you to give your best to solve any problem, even those that would normally knock anyone down.

Cancer – Practically always
Doing victimhood is something that you do all too well, first of all because in this way you are able to put the blame for the situation on fate or on who in your eyes is responsible for it, immediately afterwards because when things happen they don’t go so you need the attention of others that you get to call it back even crying or complaining about things that are not right. An attitude that has always been part of you and that often crosses your ease with getting angry and sulking about nothing.

Leo – Almost never
You don’t like being a victim but if things don’t go well you still use this formula to communicate with others. However, the way you do it is different than usual. Unlike the others, in fact, you don’t tend to show yourself as a victim but as a heroine intent on defeating particularly difficult situations that would normally knock anyone down. A way to make others feel guilty or indebted to you or, more simply, to attract their attention and admiration.

Virgo – Often enough
Maybe you don’t usually claim to be a victim of something or someone, when things go wrong, however, your attitude changes completely, casting a shadow over everything else. Your feeling like a victim is therefore evident from your ways of doing things, the way you talk and the way you treat others to whom you tend to make your moods weigh too often. A condition that you have always carried with you and that makes you a difficult person to approach, especially when it is in its bad moments.

Libra – Depending on the situations
Feeling like a victim depends a lot on the situations in which you find yourself. In fact, when problems seem solvable to you, you tend to roll up your sleeves and give your best to solve them in the shortest possible time. If things seem to get bad or appear bigger than you, then everything changes and your feeling of being a victim becomes clear and obvious enough to lead you to complain about the misfortune that has befallen you with anyone. An attitude that with a little training you might even try to change.

Scorpio – Only if things go wrong
You like to take life head-on, so when you can you work hard to deal with all kinds of problems and to build strength in order to better overcome adverse circumstances. When your efforts seem not to give the desired results, however, you tend to break down and do it in a total way, thinking that the world is against you or that there is no hope of recovering. Sometimes this way of reacting you need to throw out the anger and fear you feel, so much so that once the moment of victimization is over, you come back to feel the strength inside you grow and make yourself proactive. However, these are intense moments that can get to confuse those around you.

Sagittarius – Only if you feel you have suffered an offense
Normally you take things very positively, leaving the role of the victim to others. However, things can change when you find yourself wronged or hurt by someone. In this case, in fact, you are not able to see things objectively, to the point of victimizing yourself by making the other person the absolute culprit and this even if in reality you both have a fair amount of right and wrong. This is an attitude that in the long run can make relationships with others difficult, even leading you to lose important friendships, which is why, as long as you have time, you would do well to work on it.

Capricorn – Occasionally
Your life is so full of commitments and things to do that you lack the time to think about what happens to you and who would be the blame for the many small setbacks. For this reason you are by no means a person prone to victimization. However, you are good at justifying yourself and blaming others, a situation in which if you need to become a victim to get the better of you, you can even change your classic way of doing things. In summary, your being and feeling like a victim is purely occasional and tied to circumstances and how things turn out.

Aquarius – Sometimes
, despite your detached way of doing things, it happens to you too to feel at the center of some conspiracy and this happens especially when a series of unfortunate events lead you to lose your temper. If things go well, however, you tend to weigh the obstacles, limiting yourself to avoiding them as much as possible and solving only those that really require it. Everything almost always happens with a certain serenity mixed with the desire to get rid of the problem as soon as possible. A way of doing that if trained could also extend to the moments in which problems tend to add up and which are, basically, also those in which you would really need more clarity to deal with them.

Pisces – When you feel trapped
If you normally try to deal with things in the best possible way and with all the serenity you have, when the problems are so many that you feel trapped, your victimhood emerges completely. But usually, it’s not so much about being a victim as it is about feeling like one. A situation that does not like first of all to you that you hate feeling powerless in front of things and that you would do anything to resolve it. Let’s say that in some way yours is sometimes almost a cry for help that you hope will be heard by someone and that when it does not happen, you still end up with solving, with your times and only after giving vent to the anxiety that the situation is in you. leads.