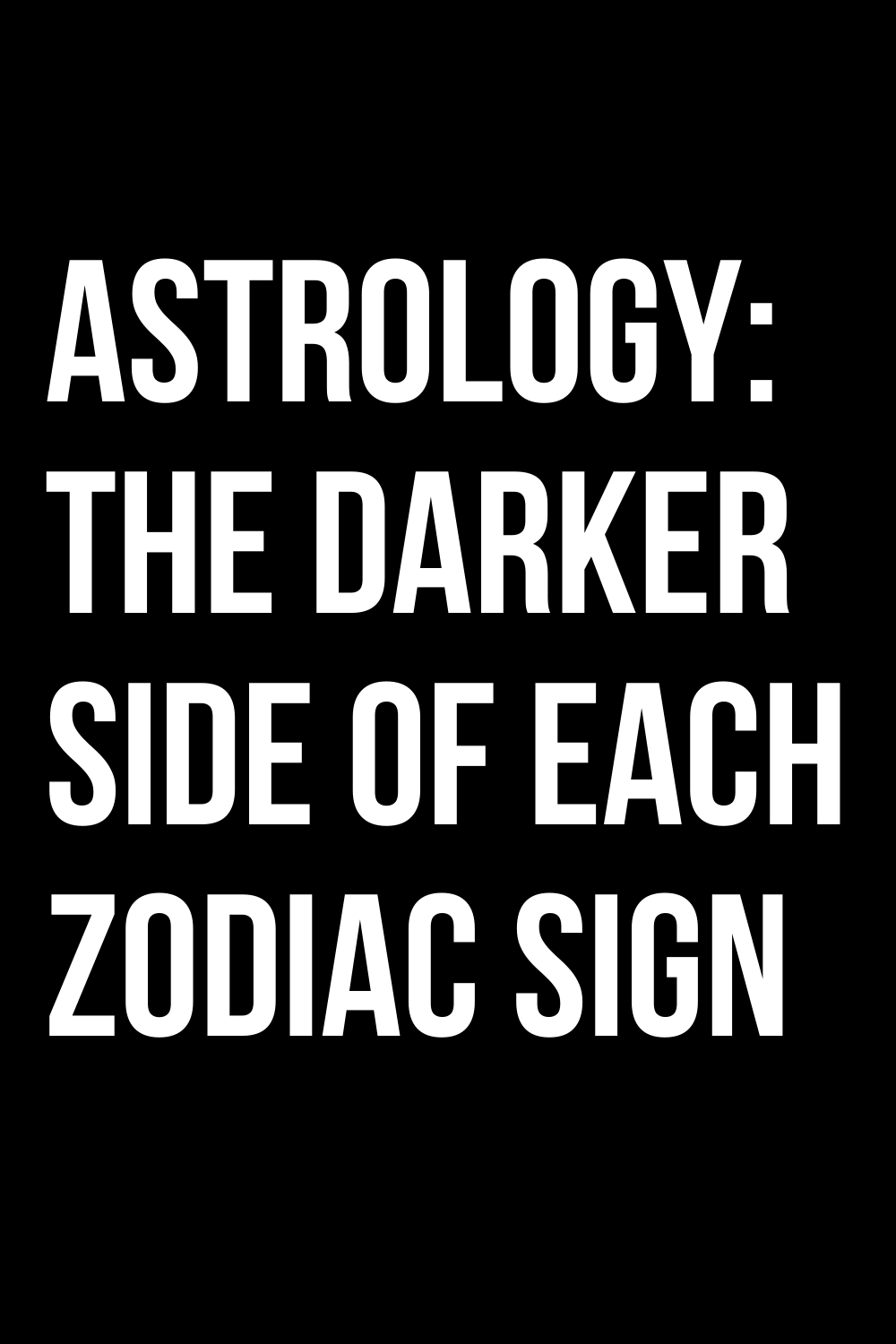 Astrology: Find out what the darker side of each sign of the zodiac is.

Each person hides a dark side within himself that makes him in some ways dangerous or difficult to predict. This may depend on the character, on the fruit of the experiences lived but in particular on the influence that the stars exert on each of us. This dark side, even if well hidden, sooner or later tends to emerge and show sides never seen or perceived before, creating possible problems even in social interactions and it is only by knowing them a priori that one can find oneself in some way prepared to recognize and react to them. in the most appropriate way possible. After seeing which are the zodiac signs they know how to love and which are the ones who know how to enjoy life, today we will therefore discover the dark side of each sign of the zodiac. Since it is a way of being linked to how deep one is, the advice is to also check the profile and the ascendant of the various signs, to have a clearer general picture.

Aries – Being capricious
Those born under the sign of Aries are very self-absorbed and confident in their ideas. Regardless of the danger, they show themselves to be true troublemakers since childhood, always ready to evade authority to embark on ever new adventures, they never care about the consequences of their actions and simply aim to do what they like best at the moment. Their dark side is given by an ability to stick so many into things that they make them make mistakes over and over again without even realizing it. To this is also added the bellicosity that distinguishes them and that makes them people who are inclined to feel superior to others, expressing it in ways that are also irritating. In short, these are people with whom dealing, in the long run, can be difficult unless you are on the same wave line.

Taurus – Greed
The natives of Taurus need to constantly feel satisfied, which is why they often find themselves willing to try to reduce duty as much as possible to give ample space to pleasure. Their darker side is that linked to greed which often leads them to put aside the needs of others, showing a way of being decidedly different from what they always try to show at the beginning. Although they always remain calm and cordial in their ways, they manage to be much more selfish than one would say at first glance and all without worrying about it in the least, which can create a certain distance even with the people closest to them and who because of this they may feel cut off or hurt by their attitude.

Gemini – Pride
Few would believe it but a dark side of those born under the sign of Gemini is that of pride. Although they are always sunny, understanding, and helpful with those around them, if they feel stung in pride they can suddenly change their mood, showing a side of themselves that is difficult to imagine. Difficult as few, the natives of the sign are usually seen as humoral people and this leads to feeling a certain sympathy for them that between uncertainty and desire to do they can almost become tenderness. It is therefore very difficult to frame them when they stiffen, even taking unexpected positions and all only because they do not agree with the way of doing or expressing themselves. Surely it is a sign to always keep an eye on and from which to expect anything.

Cancer – Selfishness
The natives of Cancer always love to look their best and to do so they do not hesitate to show themselves, kind, sweet, and always well disposed towards others. Deep down, however, these are capricious people, who have particular desires about their lives and who always expect something from others that, if not respected, can easily make them change their face. Their dark side is certainly that of selfishness and tends to come out when they are caught off guard or, forced to make an immediate decision, have no way to pack it with good manners. In this case, they always end up tensing up and once they lose control they can look so different than they usually do that they are almost unrecognizable. Always better to pay close attention to their mood swings, then.

Leo – Egocentrism
Those born under the sign of Leo have as a great dark side what drives them to do everything always and only with a single final purpose, that is to do good for themselves. Although they may be interested in others and kind-hearted, in reality, what they care about is to obtain from others and from the events themselves what they aspire to. Theirs is such a well-developed mechanism that it is difficult to recognize, which is why they tend to always please everyone and be convincing in their wanting to see everyone happy. And it can be said that in some ways when it doesn’t cost them much, they are willing to give themselves up for others, which makes them feel at peace with themselves. The problem is that in case of danger or need they will never even stop to think putting themselves first.

Virgo – Hate
Yes, Virgo natives have a dark side that even leads them to hate if things don’t go as they would like. Often negative as few tend to have a distorted view of life and this makes them more likely to experience negative feelings not only for the unpleasant situations they find themselves in but also for the people around them. Unfortunately, it is not something that they do on purpose (at least not always) but that comes from within, leading them to live badly and to show this side of themselves too impetuously, leaving those who find themselves in the middle displaced without having an idea of ​​how to do it. they are finished. Better to always remember them, especially when you see them more shady than usual.

Libra – Vanity
Those born under the sign of Libra are vain people and in need of confirmation from life and others. Gentle and stylish and endowed with a certain elegance, they always love to appear at their best, which is why it is difficult to perceive their dark side, well hidden behind layers of actions and words studied ad hoc. Yet, underneath they are so vain that they can resent if someone turns up against them or doesn’t appreciate their efforts to look their best or make something taste good in the eyes of others. Better, therefore, never forget to praise them because even a simple oversight could bring out this way of being in a threatening way, prompting them to suddenly become severe and less welcoming than they usually show themselves to everyone.

Scorpio – Revenge
The natives of Scorpio have a dark side so evident that it is no longer a mystery to anyone. Yet still many tend to underestimate it, thinking it is just rumored. Their thirst for revenge is instead the darkest part of them and perhaps the darkest side of the whole zodiac. When they feel threatened or attacked they bring into play thoughts and actions that are often difficult to understand but sometimes only to make them feel better. For them, revenge is a subtle pleasure and the only way to silence the anger they would otherwise feel. For this reason, they can push themselves further and all without regret or remorse. It is always better not to plot against them, therefore, because having them as enemies is not a good thing for anyone.

Sagittarius – The malice
The dark side of those born under the sign of Sagittarius is a form of malice that leads them to behave in an unpleasant way when they feel that someone has acted badly towards them or, more simply, they do not feel appreciated as they would like. When this happens, while trying not to show it, they begin to assume an attitude of closure that is rarely understood and which leads them to end most of the relationships unpleasantly. It could be said, therefore, that it is a dark side that tends to row almost more against them than towards others and that they could avoid by starting to speak and express what is wrong, rather than doing it with attitudes that are difficult to do. understand. Until then, those who know them will have to keep an eye on their ways,

Capricorn – Lies
Those born under the sign of Capricorn have the particularity of experiencing what happens around them in a strictly personal way and this leads them to translate everything to the point of often telling different versions of what happened. If in everyday life this way of doing them can result in an enrichment of what happens to them, in other cases it can give rise to lies even for structured that can create many problems both for them and for those around them. This is their dark side as they can handle it with difficulty getting lost between the lack of balance and the ability to even lie to themselves.

Aquarius – The stubbornness
Lacking the desire for interaction and thanks to the lack of attention they give to the judgment of others, those born under the sign of Aquarius can appear as strong people of character and always firm on their ideas. This way of being, however, also corresponds to their dark side which is precisely the stubbornness that is also the cause of so many clashes they have with others and that with less rigidity and some more attention to words they could very well avoid to live better. Unfortunately, making them understand this problem is very difficult because they also have a certain amount of pride on their side. It is, therefore, best to always keep this problem in mind when dealing with them.

Pisces – Melancholy
The natives of Pisces are great dreamers and people who are always able to grasp and understand the emotions of others. Deep in the soul, however, they tend to sink into heavy emotional states when their ability to dream fails for any reason. The melancholy in which they immerse themselves and which at times seems to almost swallow them is their darker side because it pushes them to close in on themselves, forgetting everything and everyone, without giving any explanation. The risk is therefore that of being misunderstood and never helped by those who could be next to him. However, it is a way of doing things that for them is so instinctive that they almost have no control over it. Always observe because they will always try to hide what they feel, especially if it is negative emotions.