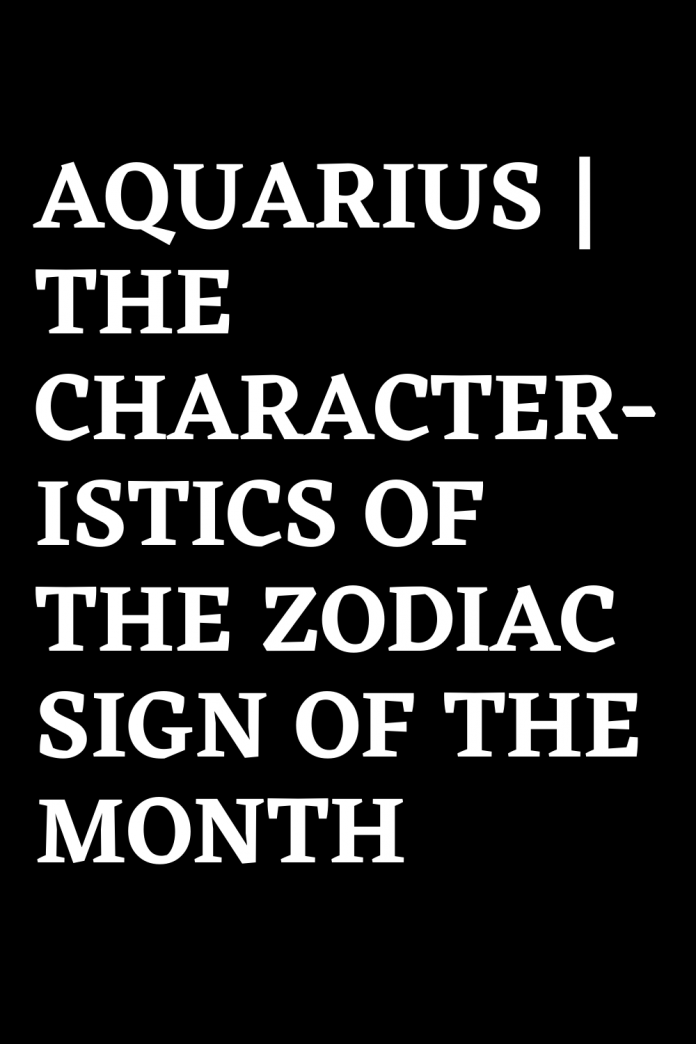 Let’s discover all the characteristics of the zodiac sign of the month: Aquarius.

Today January 21, we enter the month of Aquarius, the eleventh sign of the zodiac.
Let’s find out, therefore, what are the main characteristics and curiosities concerning people born under this sign which is the one that comes before that of Pisces and after Capricorn that we met last month.

The zodiac sign in general
Aquarius is the eleventh sign of the zodiac and the one that comes immediately after Capricorn.
The natives of this sign are independent people, who have a very broad view of things and who love to experiment and get involved.
Brilliant and acute, they know how to grasp the different aspects of each issue on the fly and relate to them with ways of doing usually witty and always able to surprise those around them.

As for communication, they know how to be open and self-confident and always demonstrate a certain mastery both in the way they speak and pose.
At the same time, they need to maintain and preserve their spaces which are usually larger than those of the other signs of the zodiac. Which, in some ways, can make them appear at times asocial and at others distant but which in reality is a need they have to concentrate and live their life to the fullest.

When dealing with others they tend to show themselves for who they are, ignoring people’s opinions and preferring a spontaneous approach.
Certain that they can find their place in the world, they always know how to manage stressful or difficult situations, and to do so they use their past experiences as well as their logical capacity which is strongly marked.

Although they are sometimes difficult to understand, they don’t seem to care and, on the contrary, enjoy surprising others, sometimes even playing with hints that can create confusion in those around them.
Nevertheless, they also know how to establish important relationships and be a point of reference for those who, looking beyond, can grasp their depth of thought and what drives them to act differently from others.

Those born under the sign of Aquarius have a more or less neutral relationship with work. While they love the idea of ​​making a career, they tend not to become fossilized on this concept but to live a little for the day, taking what the universe has to offer them.

They generally prefer to perform tasks that lead them to work alone and this is because they don’t like having to socialize while they work. If they find themselves working with other people, then, they can be a little distant and sometimes difficult to deal with. As leaders they tend to delegate a lot but only if they can trust the people who work for them. Otherwise, they end up taking on everything. They find it hard to teach what they know and everything because they prefer to trust themselves.

Extremely inclined for art and everything abstract, they give their best when they can work calmly and serenely while under stress they tend to close themselves and put themselves less in the game.

In relationships, Aquarius natives are often complex and difficult to understand. While on the one hand, they have ways of doing things that are so captivating as to attract others to them, on the other hand, they need to manage relationships in a very personal way.
Generally, the thing they care about most is to surround themselves with people who can understand them and respect their spaces. They hate pushy people and anyone who tries to tell them what to do or think.

In love, things get easier because in a two-person relationship they manage to manage each other better, as long as there is someone on the other side who can understand them and be close to them without unnecessary pressure.
When they fall in love they tend to show it but without exaggerating and are also able to flirt, throw the right signals, and always be interesting. If someone woos them, on the other hand, they tend to stay a little more on their own, studying who they are in front of to understand whether or not he can be the right person for them. Having to choose they prefer to be alone than with someone who does not know how to make them happy. And, their independence is so evident that sometimes, even unwittingly, they tend to intimidate those who try to relate to them.

Having said that, once a bond is established it is difficult for them to tire and if on the other side you do not try to change them they tend to be quite stable. Otherwise, they might choose to close the story as soon as possible because, in the end, the most important relationship for them is the one they have with themselves.