Besides the zodiac sign, about which many details are known, the ascendant has an overwhelming importance. The reason why the information about the ascendant is not so widely spread is due to the fact that for the calculation of the ascendant, the date, time of birth and place of birth are required, being a much more complicated procedure than determining the sign in which someone was born.

In addition to the zodiac sign, about which many details are known, the ascendant has an overwhelming importance. The reason why the information about the ascendant is not so widely spread is due to the fact that for the calculation of the ascendant, the date, time of birth and place of birth are required, being a much more complicated procedure than determining the sign in which someone was born.

The ascendant, as the name indicates, is the sign that will grow in influence in adulthood, at the age of 30 the sign in which someone has the ascendant characterizing that person very strongly.
What can be done if someone does not know their birth time? Simple: call an astrologer and answer a series of questions, based on the answers the astrologer determines the ascendant. It is preferable to turn to an astrologer with experience in these endeavors.

The ascendant can be calculated on various websites, but be careful to set daylight saving time if necessary and to only use programs to calculate the ascendant that also take into account the place of birth, otherwise very large errors can occur.

A mini guide on the ascendant according to age:

Children and adolescents up to 18 years old . In this age category, the influence of the ascendant is reduced.

Aries Ascendant– He quickly wants independence from his parents. He insists on doing things on his own.

Taurus Ascendant – Has an innate practical sense and abilities for the exact sciences (Taurus being an earth sign) or for art (Taurus is ruled by Venus, the planet of beauty).

Gemini Ascendant – He is a child eager for information and very attentive to what he is told. He loves travel.

Cancer Ascendant – He is strongly attached to one of his parents and his emotional sensitivity is very high.

Leo Ascendant – A child and teenager very sensitive to criticism and praise alike. He quickly imposes his will on parental authority.

Virgo Ascendant – He seeks to do things as perfectly as possible and observes all the mistakes around him, without sparing his parents from his precise observations.

Libra Ascendant – A dreamy child/adolescent with his head in the clouds, very adaptable and liked by those around him. Quickly enter the game of seduction.

Scorpio Ascendant – A child / teenager fascinated by everything that is forbidden: occult sciences, family secrets life. He quickly comes into conflict with parental authority.

Sagittarius Ascendant – Loves traveling and dreams of reaching all corners of the world as a child. Sociable and friendly.

Capricorn Ascendant – A child / teenager who matures quickly. He is very ambitious at school.

Aquarius Ascendant – He has original ideas and is a child full of resources and surprises. In adolescence, he demands a lot of freedom from his parents, otherwise he becomes a rebel.

Young people between 18 and 30 years old: The influence of the ascendant is mixed with that of the birth sign. Depending on the sign in which he was born, each young man manifests differently the first, more accentuated characteristics of the ascendant.

Aries Ascendant – Seeks to assert himself, to make decisions without being influenced. Give a lot of time to self-knowledge (through psychological tests, astrology).

Taurus Ascendant – Tests his abilities in the field of business and is strongly interested in achieving himself materially.

Gemini Ascendant – He travels more and more, has many friends and is a communicative person. He often suffers from indecision and needs a more decisive partner.

Cancer Ascendant – Selflessly helps everyone. He creates a family quickly, because he feels the need to be surrounded by love and to offer his support to his loved ones.

Leo Ascendant – Seeks to achieve himself professionally and to reach the top of the hierarchy as quickly as possible. In love, he is equally passionate, he is not satisfied with half measures.

Virgo Ascendant – He is quickly noticed in the professional environment for his perfectionism, which is evidenced by his attention to details. It is more difficult to open from an emotional point of view.

Ascendant Libra – He is a very pleasant person in the environment in which he works and his relationships are free of conflicts. He usually gets married quickly, because he is lucky in love.

Scorpio Ascendant – He has many desires: money, power, which he is driven by. His success is quick due to the strength with which he is involved in all fields.

Sagittarius Ascendant – He places great emphasis on professional development, follows many qualification courses and pursues his goals with great concentration.

Capricorn Ascendant – He always looks for tangible results and does not spread his energy. He looks much older than his real age and acts accordingly.

Aquarius Ascendant – Surprising developments in these natives. You never know what surprise a person with this ascendant has in store. In general, a radical change (in behavior and in his choices) between 18 and 28 years old!

Pisces Ascendant – He puts great emphasis on the sentimental plane and is a conciliatory person. These young people are often absorbed in their inner world and seem reserved, although they are very good friends.

Adults over 30: The influence of the ascendant is very strong!

Aries Ascendant – He is a brave, decisive person, quick in decisions and in action. He knows his limits and qualities very well, which makes it easy for him to enter competitions and always defend his point of view.

Taurus Ascendant – He has a calm temperament, but is firm on his positions. He is a person who is very good at investments and sooner or later starts his own business.

Gemini Ascendant – An open, communicative, but changeable and restless person. Adaptability is a quality of this ascendant. In general, he changes several jobs or entourages because he gets bored easily. He remains an eternal teenager!

Cancer Ascendant – A good-hearted and merciful person, who is a real help to all needy people and family. Less sociable, he is a reliable friend but also a parent of grade 10.

Leo Ascendant – His self-esteem is increased and he dominates his surroundings by his simple presence. He doesn’t really like jokes about him. He has a strong will and will always look for a decision-making position.

Ascendant Virgo – He is a diligent and hardworking person, very rational. He manages well by dividing himself on multiple levels: professional, social and family. Let’s not forget that Virgo is a mutable sign and adaptability is a basic characteristic!

Libra Ascendant – Its conciliatory nature is increasingly visible. He does not make decisions on his own but always depends on others. He always tries to reconcile the world, make compromises and find a middle way. Breakups are particularly hard to bear.

Scorpio Ascendant – This person wants to have total control over his life and often, over the lives of those around him. Most people do not have the will of these natives and will submit to the decisions of a Scorpio native. His interest in the occult sciences is alive.

Sagittarius Ascendant – This native is very difficult to adapt to a couple relationship because he needs freedom of movement and freedom of decision. But she is a generous nature. His advice is very good, those with Sagittarius ascendant are born advisers.

Capricorn Ascendant – In general, a person with Capricorn ascendant at the age of 30 is already an accomplished person both professionally and at family level, thus surpassing other natives. However, he is worse in the social chapter, because he has few friends, being a serious and withdrawn person.

Aquarius Ascendant – Friends will always be very important in this native’s life. He is involved in the study of astrology, psychology and is always up to date with new information. He is a person full of originality and naturalness.

Pisces Ascendant – This native often asks himself existential questions, related to the deeper causes of things. Meditative and internalized, he performs his professional and family tasks very well. He has interests in the field of spirituality, philosophy or religion.

The ascendant not only influences the personality characteristics but also the predisposition to diseases, to the practical profession, as well as the compatibility in a couple. 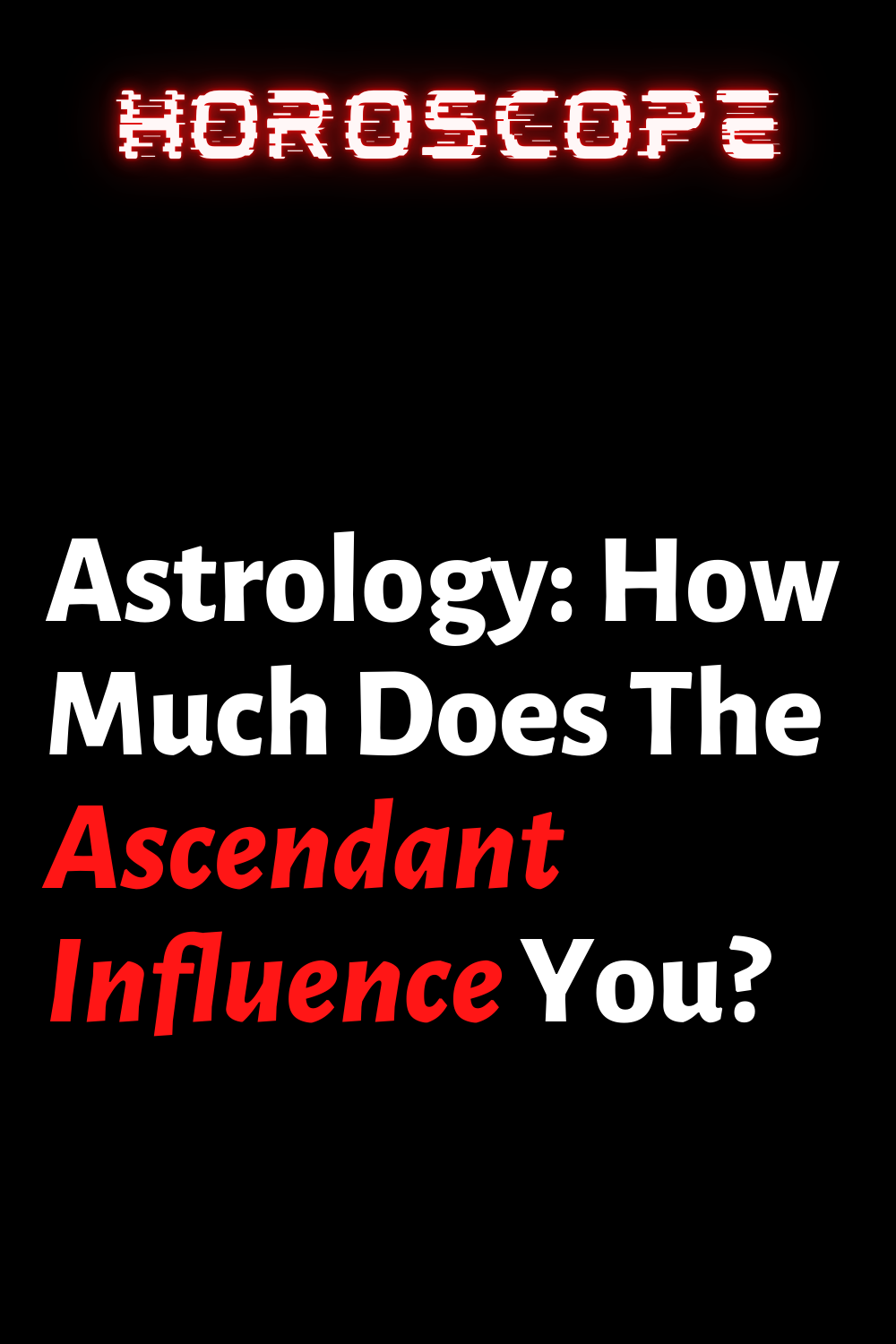 HOW TO MAKE THE MOST OF THE REMAINING DAYS OF 2021, ACCORDING TO THE ZODIAC

WHO KNOWS IF YOU ARE ON THE LIST OF THE FIVE MOST SPIRITUAL SIGNS OF THE ZODIAC (OR IF YOUR PARTNER IS THERE). BETTER CHECK!

How to get his attention according to his zodiac sign 2022