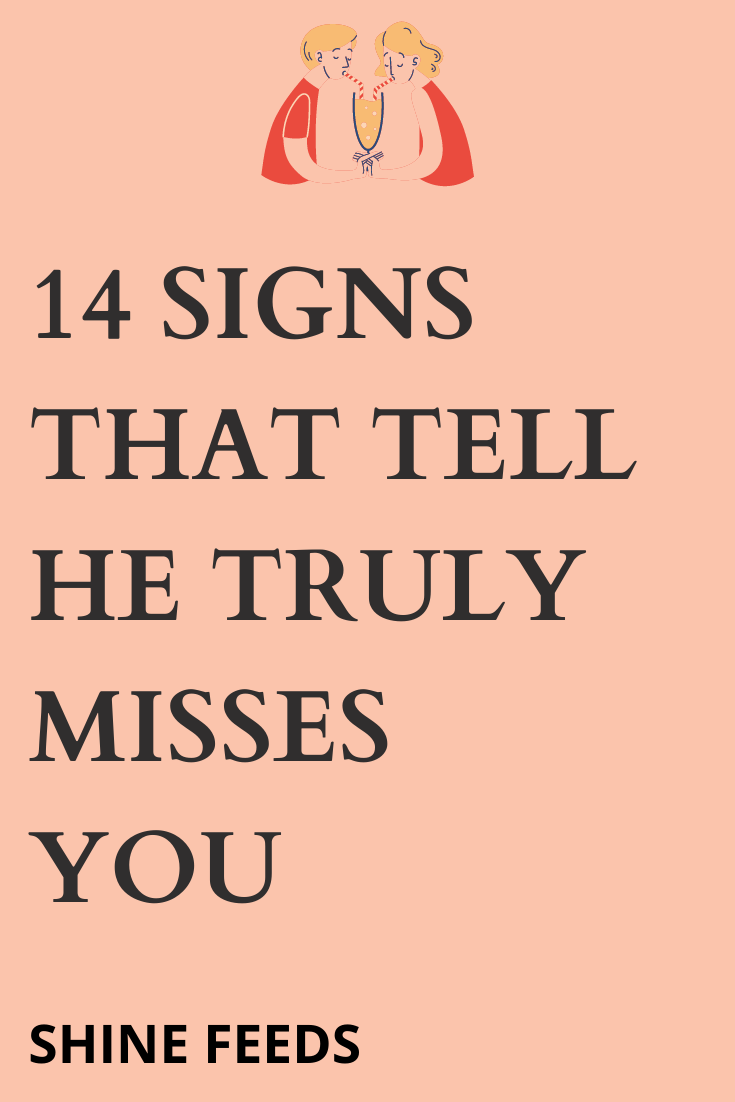 How many nights have you wondered if he was honest when he said he missed you?

How many times have you actually wanted it to be true and wanted to find a way to know that he’s actually missing you?

We’re all a bit curious about what happened with people we were once really close to and we wish we could go back and re-do some things.

Perhaps you are one of the lucky ones who still has a chance to right the wrongs done in the past and perhaps the actual answer to your question of if he misses you is YES!

To see if he truly misses you, we’ve created a list of 14 signs that will serve as an answer to all your doubts, so keep reading!

We don’t mean those pictures, you know, the ones you regret sending almost all the time.

We mean those cute selfies or pictures of you in your pyjamas or wearing his old hoodie or anything that will show him the real you.

Actually, he asks for those photos so he can have something to stare at the whole day.

Something that will remind him of the time you were together or perhaps to relive the illusion that he’s still as important to you as he was before.

He truly misses you when he answers your text immediately

If he’s the one to initiate most of your conversations and if he still keeps texting you after you respond, it’s a clear sign he misses you.

But how much he actually misses you, you’ll be able to see by the time it takes him to answer your text.

He’ll probably want to not look desperate and may try to wait a bit with texting back, but if he misses you that much, he’ll probably have a hard time stopping himself from texting you back immediately.

Just hearing your voice will not tame his thirst for you and that’s why he’ll choose FaceTiming over calling.

He’ll want to see you and hear you at the same time, and if not in the flesh, then at least over the phone.

He’s probably going to have a few jokes prepared just so he can see you smile, and to perhaps remind you how good it was when it was only the two of you in the game and when everything was okay.

He truly misses you if he likes your old pictures

You know that feeling when you’re in someone’s Instagram a year or two deep and you just pray you don’t double-click an old photo?

Well, he isn’t ashamed to hit the like button.

Perhaps he even deliberately likes your old photos so that you’d know he is scrolling through your profile and that he’s thinking about you.

Maybe you remember him as a calm guy and now he’s there all of a sudden, throwing temper tantrums and getting mad without any real reason.

The funny thing is the fact that he has no right whatsoever to get mad at you, yet he does.

What you need to understand is the fact that he isn’t mad just because or he isn’t projecting his work anger or something else on you; he’s actually furious with himself with the fact that he really misses you.

He’s mad because he’s probably getting negative feedback from you and he can’t help his burning feelings.

Maybe you had your own song or there are songs that he often dedicated to you or even those that were playing on any of your special occasions.

If he’s posting those knowing you’d be able to see them, it is a clear sign that he misses you and the times you had together.

This is his way of expressing his feelings and perhaps showing he’s being a little bit nostalgic for the good old times.

Perhaps while you two were still a thing, he didn’t bother calling in a while and now, all of a sudden, he has no trouble calling a few times in a row when you don’t pick up the phone.

And when you finally do pick up, he hits you with some casual talk such as, “Hey, what’s up?”.

You might even get mad at him for calling you so many times, but he’ll probably have some stupid excuse or even be bold enough to call you to go out for a cup of coffee.

The thing is, he’s not been thinking straight for a long time and he won’t even think he did anything wrong.

He truly misses you if he still has all your gifts

Not sure about you, but plenty of people rush to throw away all the things that remind them of their exes or the bad things they’ve been through.

So if he still has your gifts and if he’s still wearing that sweater you gave him when things were good between you two, it’s an obvious sign he misses you and that he secretly wants those times back.

You know, men need a little bit more time to process things when it comes to relationships and perhaps it won’t be too much later when reality sinks in and he sees what actually happened between you two.

This might result in him not being as social as he used to be or that he prefers spending time alone instead of going out or Snapchatting to the world.

If he misses you, that will affect his social life for sure and he’ll want to be left alone with his memories.

He truly misses you when he’s trying to look better

He’ll make sure you see he’s looking better too.

He actually wants to step up his game and if you see him working on himself (while he wasn’t really paying too much attention to how he looked while you were dating), this can be a sign that he’s aware of the things he did wrong and he’s trying to fix it.

Also, this could be a sign he’s preparing himself to come back into your life.

If he was never too much of a sentimental guy and if he was never tied to a single place but you see him hitting the old places where you used to spend time together, this will be a clear sign that he misses you.

Visiting old places can have one of two meanings—he’s either reliving old memories or he’s secretly hoping to meet you there.

Whatever it may be, it speaks volumes about how much he misses you.

He won’t be mentioning all those times when you fought or those ugly times when he did some things wrong, but whenever you two start chatting again, he’ll be more than happy to mention how you had good times doing this or that.

He’ll try to slowly awaken in you all the things he’s feeling now, hoping that you’ll be able to get to the same page once again.

Maybe it’s not only that he misses you but that he’s even thinking about a reconciliation?

If this is true, then he’ll be using the same old tactics, but perhaps this time an improved version to win you over.

He’ll be flirting with you, paying you compliments and using any occasion, even those stupid ones, to hear from you.

He truly misses you when he says it out loud

If he has gathered together the courage to say out loud that he misses you and that he misses the times when you were together, know that it took him a lot of guts to do that and he wouldn’t trouble himself doing so if he didn’t truly mean it.

Moreover, if he combines his words with all the signs listed above, then you can be absolutely positive he’s telling the truth.

See, if a man misses you, he’ll never choose to stay put. Instead, he’ll do everything in his power to show you how he feels about you.

It’s up to you to decide if you want to welcome him back.

Make sure you first check your feelings and stay true to yourself when making sure if you miss him too or not.