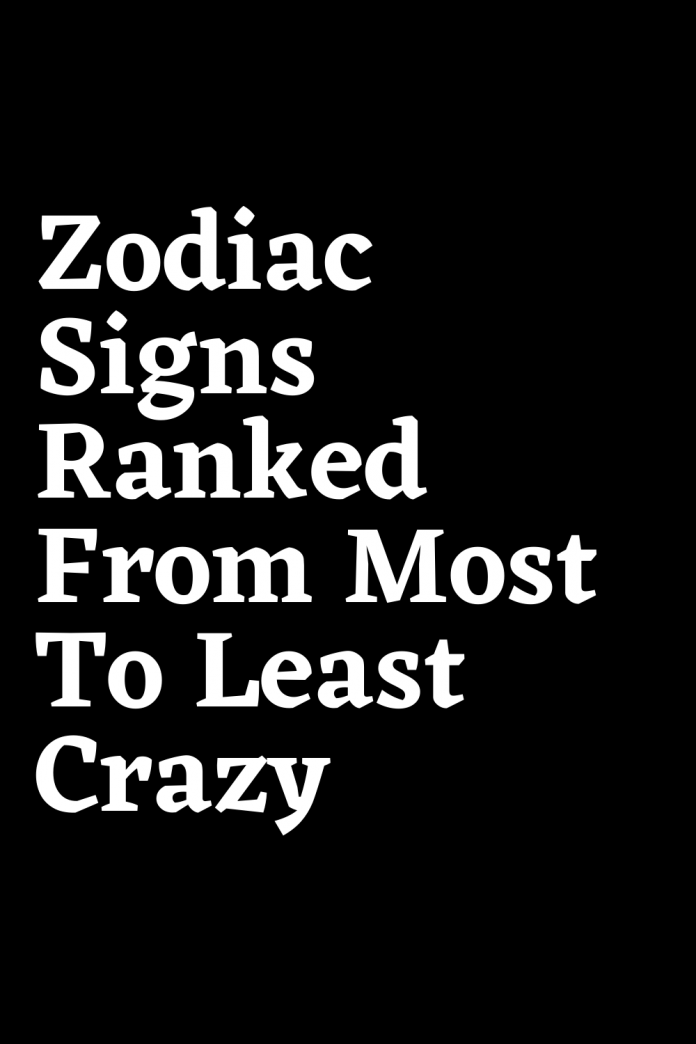 Almost all of us have our crazy side. Some zodiac signs hide it better than others, some are proud of it and some are totally deprived of craziness.

Which one are you?

Which one is your crush or SO?

How is your best friend ranked?

Keep on reading and find the answers:

A Gemini could easily get away with murder based on their level of craziness, so you better watch out and don’t even try to mess with them.

Their dual personality gives them the ability to transform from super kind to batshit crazy in a nanosecond. They are unpredictable and you never really know what is hidden behind their perfect smile.

When it comes to Scorpios, they are always in a messy situation and if you ask them, they are never the one to blame.

They created the delusion in their head that they are just a mere victim of circumstance.

On the other hand, if someone really hurts a Scorpio, they won’t hesitate to sting right back.

Giving someone a taste of their own medicine is what Scorpios do best. Scorpio is not someone you want to piss off, believe me.

Rules are there so you can break them if you ask an Aries. They don’t bend to fit the world, they try to bend the world to fit them.

They are good as gold but once they feel unappreciated and used, they will show their nasty side.

They won’t be able to restrain their temper and there is no saying what they are capable of in their blackout moments.

With Virgos, there are only two roads to take—their way or the highway.

They are a perfectionist by nature and they have their own preconceived ideas of how everything is supposed to look.

Needless to say, life isn’t perfect and nothing ever goes as planned and that’s why Virgo’s short temper is bound to surface.

They will complain, nag, scream and shout while trying to make other people see things their way. Acting crazy when they are pissed off is Virgo’s specialty.

When it comes to Aquarians, they are so intelligent it’s scary. Whatever they do, they can provide you with a perfectly reasonable explanation why it all had to go that way and you can’t argue with them.

They are smart enough to get away with murder and cover their tracks if necessary.

They won’t go to these extents but I’m just saying they are more than capable of it. Think about it—their brain is like their ‘get out of jail free’ card.

Impulsive, impatient, competitive, totally wild, dominant and unpredictable is just half of everything Leo is and it’s more than enough.

They are sweethearts in general but when they are mad the whole world will know.

Their desire for success in life, work and love is the core of Capricorn’s craziness.

They will do whatever it takes to reach their goals in all three areas that they will sometimes even go against themselves.

They also have a short fuse and once it burns out, there is no telling what they are capable of.

They won’t hesitate to take vengeance on those who piss them off and the sight won’t be pretty.

Sags are really something. They think on their toes, they are impulsive, reckless and free-spirited.

So it’s no wonder that their crazy side is dominant.

They are proud of their fuck-ups and they have made more than a few.

Making mistakes is a part of life and Sags aren’t afraid of them as they are a learning process.

It is a learning process, they are right, but they have a habit of making the same mistake a few times (just to make sure it was a mistake) which eventually drives them completely crazy.

Although there are days in which the sanity of a Taurus could come into question, those days are rare.

When they do happen, they are related to their impulsive and passionate side.

Basically, they react without having all the facts and jump to conclusions.

Still, nobody would ever call them crazy. They are usually cool, calm and collected.

Pisces are daydreamers, dreamcatchers and emotional AF and one would expect them to be a bit crazy. They would expect it but they would be wrong.

Pisces are lovers not fighters and they hardly ever allow their craziness to surface.

They would much rather drown their sorrows in art or wine and make peace with the situation at hand than make a big fuss about everything.

They are sensitive and empathic and they are incapable of intentionally harming another person, even if they do them wrong.

Cancerians have a heart so huge that they approach every difficult situation with understanding and the intention to forgive.

They believe that a heart to heart conversation will bring about much better results than fighting will.

Librans are all about balance, that’s why it’s no wonder they are the least crazy ones of all the zodiac.

They hate drama and they avoid fighting whenever it’s possible.

They think before they act and always try to see the other side of things.

They are the one who restores peace and advocates a peaceful and harmonious life. Crazy is not their cup of tea.

December 18, 2021
The Shine Feeds is your news, entertainment, music fashion website. We provide you with the latest breaking news and videos straight from the entertainment industry. Fashion fades, only style remains the same. Fashion never stops. There are always projects, opportunities. Clothes mean nothing until someone lives in them.
© © Copyright © 2021-shinefeeds.com. All rights reserved