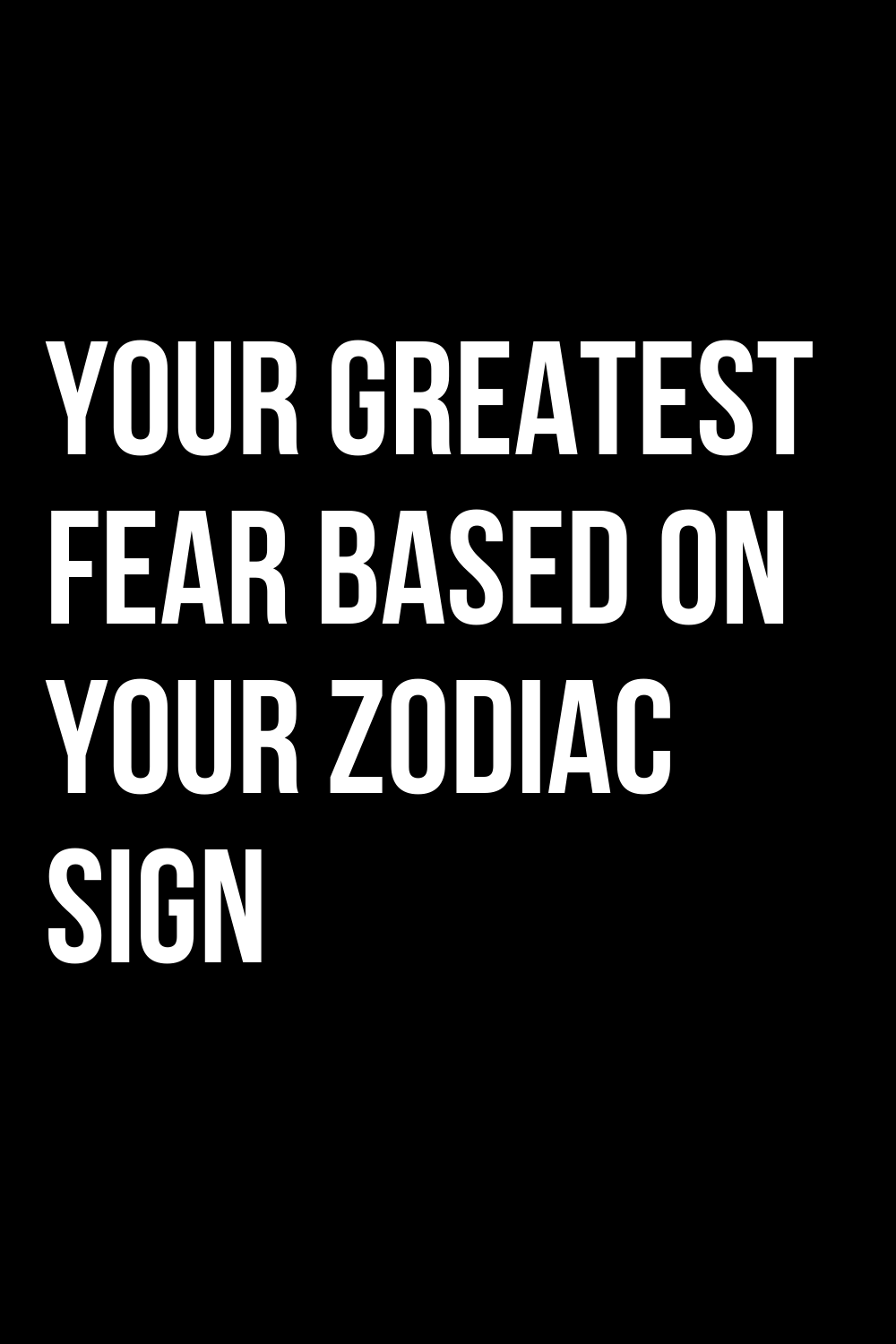 We all have our fears and doubts that we struggle with all the time, even the bravest of hearts. Psychologically, fear is part of our evolution. It is a response to an emotional and physical danger experienced by almost everyone. Some people believe that the cause of fear may be that we have encountered danger or experienced trauma in the past. During our development, we often experience things that become our deepest and greatest fears. But these fears are also unique to your inherent personality, and therefore to your zodiac sign. Here we reveal your greatest fear based on your zodiac sign.

Let’s dive into the characteristics of 12 zodiac signs and their greatest fears.

Biggest fear: Not being able to stand out from the crowd. You don’t want to be ordinary and mediocre.

Aquarians want to stand out for their individuality and uniqueness and not just be another sheep in the herd. The greatest fear of this zodiac sign is that they will become ordinary and fail to do something revolutionary. You want to make a difference.

But if Aquarians were in tune with their innate nature, they would have nothing to fear. They are already unique, full of original ideas and new perspectives. They just need to properly channel their natural gifts.

Biggest fears: rejection in love, emotional pain and being misunderstood.

The idealist among signs, Pisces find reality itself a fearful thing. They fear that their creativity and ideas will be suppressed by our cold and calculating society. Most of all, Pisces fear losing love, or worse, not being loved at all.

You should be more confident in your own skin, only then will you be able to touch other people’s lives with your bright and brilliant ideas.

Biggest fear: Not being the alpha and being bossed around by others.

Aries love to have all power in their hands. They like to lead and make decisions. They hate being checked or told what to do. When they are prevented from holding the reins in hand, it fills them with a deep horror. They have to make their own life choices, and being dependent on someone else is one of their greatest fears.

Greatest fear: Living in poverty, any kind of radical change and the inability to fulfill your dreams.

A sense of stability and security is like oxygen to Taurus. They fear the unknown and prefer to stand on solid ground, so dealing with radical change is terrifying for them. Taurus are good with their finances and are always afraid that something unpleasant will happen and upset their financial stability. They take financial losses very seriously.

Taurus want to achieve fame, success, and money. They fear that unfortunate circumstances could prevent them from fulfilling all of their dreams.

Biggest fear: being stuck in a monotonous routine and being bored.

A boring life is the worst fate for twins. This zodiac sign is all about doing something new and interesting, so it’s no surprise that Gemini’s greatest fear is getting stuck in a monotonous routine. You want to experience, learn, move and grow all the time. They feel restless and desperate after being stuck in one place for too long.

What the twins need to understand is that quiet time to reflect is also essential in order to move forward.

Greatest fear: to be alone and without love.

Love, friendship, loving partnerships, marriage and in general all personal relationships are sacred to Cancer. They have to be constantly surrounded by love and security and cannot bear the thought of living their life alone.

The only way to overcome her fear is to get more familiar with her. They should start spending more ‘me time’ which will help them fall for the love that comes from within if they ever need to be alone.

Biggest fear: Feeling ignored, especially by someone special, can hit you to the core.

In general, Leos love to be the center of attention and to be showered with praise and admiration. If they can’t use their talents and charms to reprimand the crowd, it worries them very much. And if they don’t get the attention they’re looking for from someone special, it literally breaks them to pieces.

You have to believe that you don’t need others’ approval to feel worthy. Your strength comes from within.

Greatest fear: The fear of failing and of being unworthy.

The mark of service, the Virgo, is a hardworking and organized person. They fear that they will not achieve the high standards they have set for themselves. They are the perfectionists, be it their love or work life. When they achieve their goals, it builds their confidence, but when they fail they lapse into negativity and question their worth. Feeling that they are not good enough is the worst thing they can experience.

Virgos need to understand that it is not healthy to use their accomplishments to define their self-worth.

Greatest fear: Making a decision that could throw your life off course and lose your attractiveness.

Libra is a sign that is all about balance, diplomacy and an eye for aesthetics. When it comes to making a big and important decision, it gives them sleepless nights. They fear that the decision could throw their lives into chaos and disharmony.

Another major fear that Libras grapple with is the fear of losing their beauty and vitality with age. The thought of getting old and ugly is very scary for them.

Greatest fear: fear of revealing your dark side and being perceived as strange and depressing.

Scorpios are afraid of showing the real self to the world because they fear that no one will understand why they are who they are and will simply label them as strange and dark. Yes, Scorpios have a certain darkness about them, but they are also profound, intense, and very loyal once they connect with like-minded people.

It will help a SCORPIO immensely if they connect with more people and share their deepest thoughts without worrying too much.

Greatest fear: to be controlled by others, and every entanglement that robs them of their independence, which is very close to their hearts.

This is the zodiac sign of freedom, travel, adventure and fun, so their greatest fear is that their wings will be clipped. They fear that their dreams and longings may go unfulfilled because someone is hindering their growth or controlling their steps. Being locked in a suffocating environment is her worst nightmare.

Biggest fear: wasted potential and the feeling of being unsuccessful and small are her biggest fears.

Remember the friend at your school who pouted for not getting a 1+ in history – that person is sure to be a Capricorn. Capricorn is a disciplined personality and that is because they understand how precious time is, that this life is the only one they have to fulfill all of their big dreams. The biggest fear of this zodiac sign is that they will lose their gymnastics and waste their potential and chance to become famous.