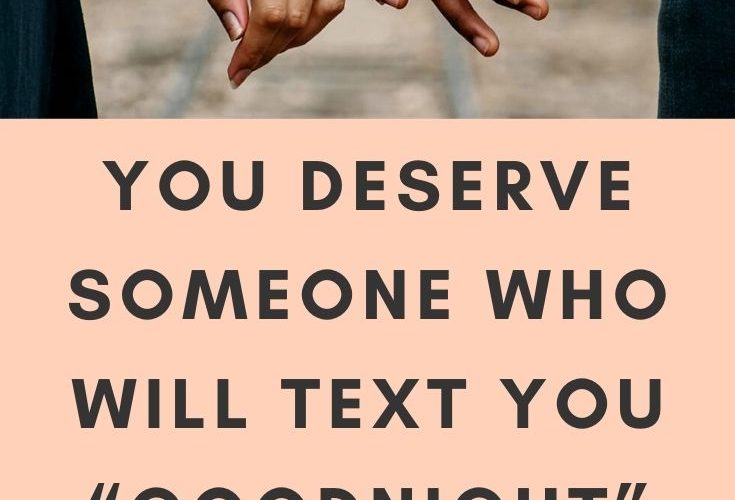 You Deserve Someone Who Will Text You “Goodnight” Every Night

I know you’re tired of men who’re good for nothing. Tired of the texting games, being ignored and taken for granted.

I know you’re exhausted from giving your best and getting the worst in return.

I know you want something more. You should want more. You deserve more.

You deserve to be with someone who will always remember to text you goodnight. Simple as that. Complicated to most men.

You see, a text goodnight from the man you are with seems like a tiny gesture, but it means everything.

You are the main thought on his mind before he goes to sleep.

He’s thinking of you. He cares. He wants you in his life. You are his priority.

Yes, that’s all hidden beneath that small yet thoughtfu and romantic message from him.

You need someone like that. Someone who doesn’t complicate simple things such as a text goodnight.

Someone who won’t hide his feelings and play hard to get.

You don’t need a man who plays games and leaves you deciphering his actions or lack thereof.

You could do without someone who strings you along and makes you feel like your relationship is more than it actually is.

Someone who is more focused on getting close to you between the sheets than he is on getting near your heart.

You don’t need a guy who’s cheap with texts because he will be cheap in everything else.

He will be cheap with his feelings, time, affection, warmth, and love – and that’s not how things are supposed to be.

He’s supposed to shower you with kisses. He should hug you long and tight so that you feel like you’re where you belong.

Your man should show you respect and understanding. He should let you know that you’re the only one for him and that his feelings are genuine.

If he fails to do that, he will fail you.

You need a man who is brave enough to show you he wants you in his life.

He’s the only one who will make you feel safe. He won’t make you question his intentions.

He’ll be so honest and open that you won’t have any mixed signals to decipher.

He will reassure you and silence your overthinking, show you that relationships shouldn’t be painful, and demonstrate that love doesn’t equal hurt.

That’s not so hard. All he needs to do is send at least a text goodnight on his busiest day.

With that one simple text, he shows you that he always finds time for you even when the world gets hectic.

With that one simple text, he says you are important to him and he can’t imagine ending his day without hearing from you.

So don’t allow anyone to convince you that you’re needy if you want him to text, show up, and make an effort.

You’re not asking for too much – it’s nothing less than you yourself are willing to give.

It’s nothing out of this world. It’s showing you care in the plainest possible way.

If you are investing, he should too. The relationship needs two people. Love has to come from both sides. If it doesn’t, it’s not true.

Most of us women are guilty of one gigantic mistake: We give too much and settle for very little from the man in our life.

We become too available. We drop everything to be with them. We initiate texts all the time. We even send a followup text when he doesn’t reply.

We forget our lives and focus on them. We ignore our needs and prioritize theirs.

Even though we hate to admit it, we do it. And it’s high time we stop.

Not just because it’s making your man pull away, but because this approach will never make us happy.

Yes, women need to send a text goodnight too – we need to make the effort. But only if we have the right man who we can do it for.

Only a man who meets you halfway is worthy of your efforts, a man who is willing to show with actions that he cares for and respects you.

You need reciprocity in every step of your relationship, from the beginning to the end. You need to get back what you’re willing to give, otherwise it’s pointless.

So, don’t believe a man who says he’s too busy to text you goodnight.

Nobody is that busy. If he cared, he would text – and not just goodnight, but good morning texts and great afternoon texts as well.

You deserve a man like that. One who makes texting, loving, and being there for you seem effortless. Don’t settle for less.