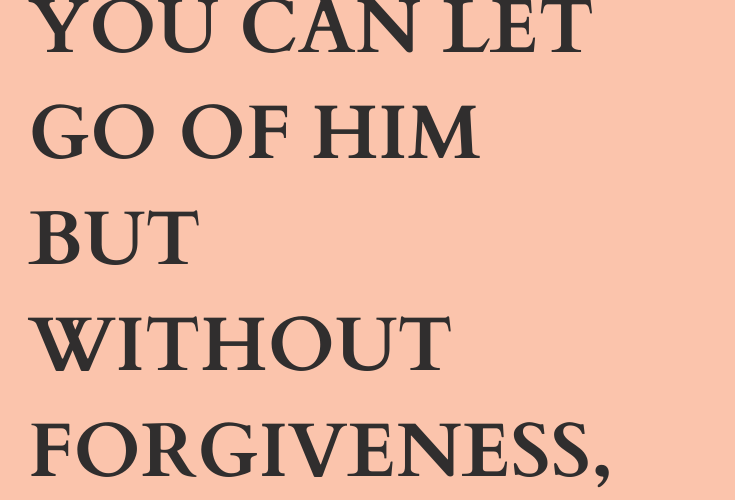 You Can Let Go Of Him But Without Forgiveness, You’ll Never Move On

Ever since you and your ex broke up, you have done everything in your power to kick him out of your system.

You played by the rules—you went no contact, cut all possible ties with him, blocked him everywhere.

Not only that—you even stopped talking about him to your friends, you stopped mentioning his name or listening to songs that remind you of him.

You did everything by the book. You didn’t repress your emotions, you grieved and allowed your heart to heal.

You followed every piece of advice you could find. You didn’t jump into new rebound relationships but you didn’t put your guard up either.

You stopped expecting him to come back. You killed all the hopes that you two might sort things out.

You are not even looking for closure. You accepted that it’s the end and don’t obsess over all the could-have- and should-have-beens.

Sounds impressive, right? It seems that you let go of this man and that you’re completely cured. At least, that is how things should be.

However, somehow, you are not getting the desired result. One thing is for sure—you don’t love him anymore.

Nevertheless, you know what’s the problem?

You still hate him. You want to get even and you hope that he’ll suffer the same way you did.

This hatred is eating you alive. It’s overwhelming you the same way your love for him did.After all, it doesn’t really matter what you feel for this guy; the point is that you’re not indifferent toward him.

The bottom line is that loving and hating him is the same and has the same effect. In both cases, he is present in your mind and heart.

In both cases, he still exists inside of you even though he is out of your life physically. Either way, you’re overwhelmed by thoughts of him.

No, I’m not trying to make you feel guilty about this. Who could blame you for feeling this way, after everything this jerk put you through?

I’m just here to ask you to forgive him because it’s the only way for you to truly move on.

You don’t need to forget everything he’s done but you must find the strength to get rid of this bitterness that’s been killing you.

Let’s be real here—you’re not harming your ex in any way by staying angry at him. This man doesn’t have a conscience and he couldn’t care less about the way you feel.

He is not ashamed of what he’s done to you. In fact, he is probably out there, looking for his next victim whose life he is about to destroy.

Therefore, the only person you are hurting with this hatred is yourself. The only one who suffers the consequences of this heavy grudge is you.

It means that indirectly, this man still controls your life. It means he still has a way of making you unhappy and miserable, without actually lifting a finger.

So, basically, he has won, right? He’s proven that he is so powerful that he has the ability to be present in you after so much time that he’s been physically absent from your life.

That’s why the only way to remove him forever is to forgive him. It’s to let go of the hatred, the anger and the resentment the same way you let go of him.

No, forgiving him doesn’t equate to giving him a second chance. It doesn’t mean applauding him for his misdeeds and it’s not the green light for him to come back into your life.

Forgiving the one who hurt you means liberating yourself of his impact once and for all. It means letting go of the negativity.

Only once you get yourself to forgive him will you be free. Only then will every emotion you have for him completely vanish.

Most importantly—only once you truly forgive him will you be able to move on with your life and leave the past behind you.