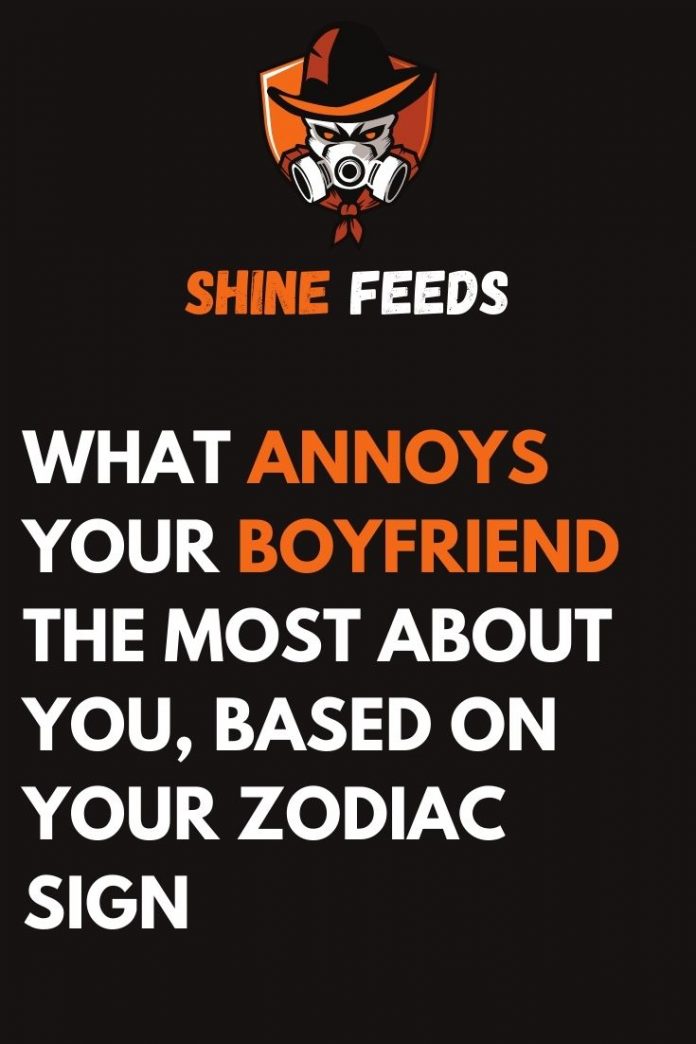 You get fired up whenever he glances at another girl or takes too long to answer a text. You start drama out of nowhere.

You bring up your past a lot. You frequently mention your exes in conversation and make him uncomfortable.

You gossip about everyone — even the people you love the most. It makes him wonder what you’ve been saying about him.

Sometimes you take your motherly nature a little too far and baby him (AKA emasculate him).

You say yes to too many things without asking him first. You plan out his weeks for him.

You think your way is the only way. You would rather do everything yourself, which means you commonly turn down his offers to help and make him feel unneeded.

You never know where you want to eat. It always turns into an argument.

You are restless, impatient, and get bored easily. This makes him insecure, it makes him wonder whether you are going to leave soon.

You’re a pessimist. You always assume the worst case scenario is going to happen. Listening to you can get depressing.

You’re stubborn. You refuse to come to compromises with him. You will keep an argument going until he caves and he gets screwed over.

You’re too sensitive. You turn harmless comments into insults. And you can never take a compliment.

After growing up in the Deep South, Asia Sullivan found her calling in healthcare, specifically for the LGBTQ+ community, and those with HIV.

As a physician assistant, she cares for many poz patients, a passion that she discovered while studying public health in college, and performing research in Jamaica. For Asia, healthcare for the HIV+ community is something she believes is sorely misunderstood. Today, she documents her career journey on her blog, coutureinclinic.com and on her Instagram.

Asia wants to debunk popular myths about HIV, discuss the most prominent barriers to early detection and prevention, as well as how important it is to have an understanding medical professional on your side if you are diagnosed. HIV is not a death sentence. In fact, many of Asia’s patients live long and healthy lives.

It’s time to change the way we think about being poz, and Asia is here to help us do it.

1. Tell us about your job. What do you do, and how do you serve the HIV+ community specifically?

I’m a certified physician assistant (PA) and specialize in LGBTQ-focused primary care. Many of my patients are HIV+ and I manage their medications, monitor labs, and perform regular physical exams. I also coordinate care with any specialists they may need to see. Another big part of my job is counseling patients on the many different aspects of living with HIV, especially in the setting of a new diagnosis.

2. When was the first time you learned about HIV? What sparked your interest to begin studying public health?

As a kid growing up in rural Alabama, my neighbor was a man who was “very sick” and needed some help around his home. That’s all I knew. I took care of his miniature poodle, feeding and walking her when he couldn’t. I grew up to learn that man died of untreated AIDS. That was my first encounter with HIV/AIDS and probably helped guide me towards a career in medicine and in public health.

The first time I really learned about HIV was my freshman year in college in my public health courses. Knowing I wanted to go into medicine, I was fascinated by the epidemiology, pathophysiology, and societal and political impacts of the virus. This leads me to volunteer with one of the only dedicated HIV/AIDS clinics in the state, mostly focusing on legislation and s*x education, as well as testing and outreach. I also spent time in Jamaica conducting research and performing HIV tests and condom demonstrations in Kingston nightclubs and at cruise ports. All of these experiences influenced my education and now my career.

3. What do you think are the major misconceptions about being poz?

That you have to take a lot of medication. Modern HIV drugs are one pill once a day. Many of my patients take their HIV medicine and nothing else because they are healthy. That leads me to another misconception: that poz people are not healthy. I always remind my patients who have well-controlled HIV that their immune systems work just as well as anyone else’s.

Some think that HIV+ people have shorter life spans. This is not true. With appropriately managed HIV, patients will live long, productive, and otherwise “normal” lives (although, what is normal?) Many of my poz patients are “long-term survivors” meaning they have lived with HIV for several decades and they are as healthy and vibrant as their septuagenarian and octogenarian peers!

4. What are the major barriers that people face in terms of treatment, and prevention?

While there are many, many complex and multifactorial barriers that people face I would say the two biggest ones are finances and stigma. HIV drugs can be incredibly expensive, particularly for those without insurance.

Adequate HIV care means having lab work checked every 6 months (at minimum, many patients choose every 3-4 months) which requires doctor’s visits, copays, and lab fees. Even with insurance, the cost of these medications and extensive lab tests can be too much, forcing someone out of regular treatment and care. The impact of the other big barrier, stigma, can vary based on geographic location, access to resources, family and psychosocial support, and many other things.

The conversation and attitudes regarding HIV is drastically different in West Hollywood as compared to the Deep South but the reality is that being poz carries stigma and many people still feel shame or fear regarding their diagnosis. Well-intentioned public health efforts aimed at prevention can make people feel that being HIV+ is a personal failure or that they have done something wrong, which couldn’t be further from the truth.

5. What advice would you give to young people who are s*xually active?

My advice to youngs*xually active people is to establish care with a health professional with who they feel comfortable discussing sensitive topics, whether it’s through an insurance network, planned parenthood, campus health center, or community health department. While it’s possible to educate yourself online, there is so much misinformation regarding safe s*x and STIs that it can feel overwhelming to get answers to your questions.

Be sure that the provider understands your particular risks based on s*xuality, gender, and s*x practices and that they are competent and comfortable discussing them with you.