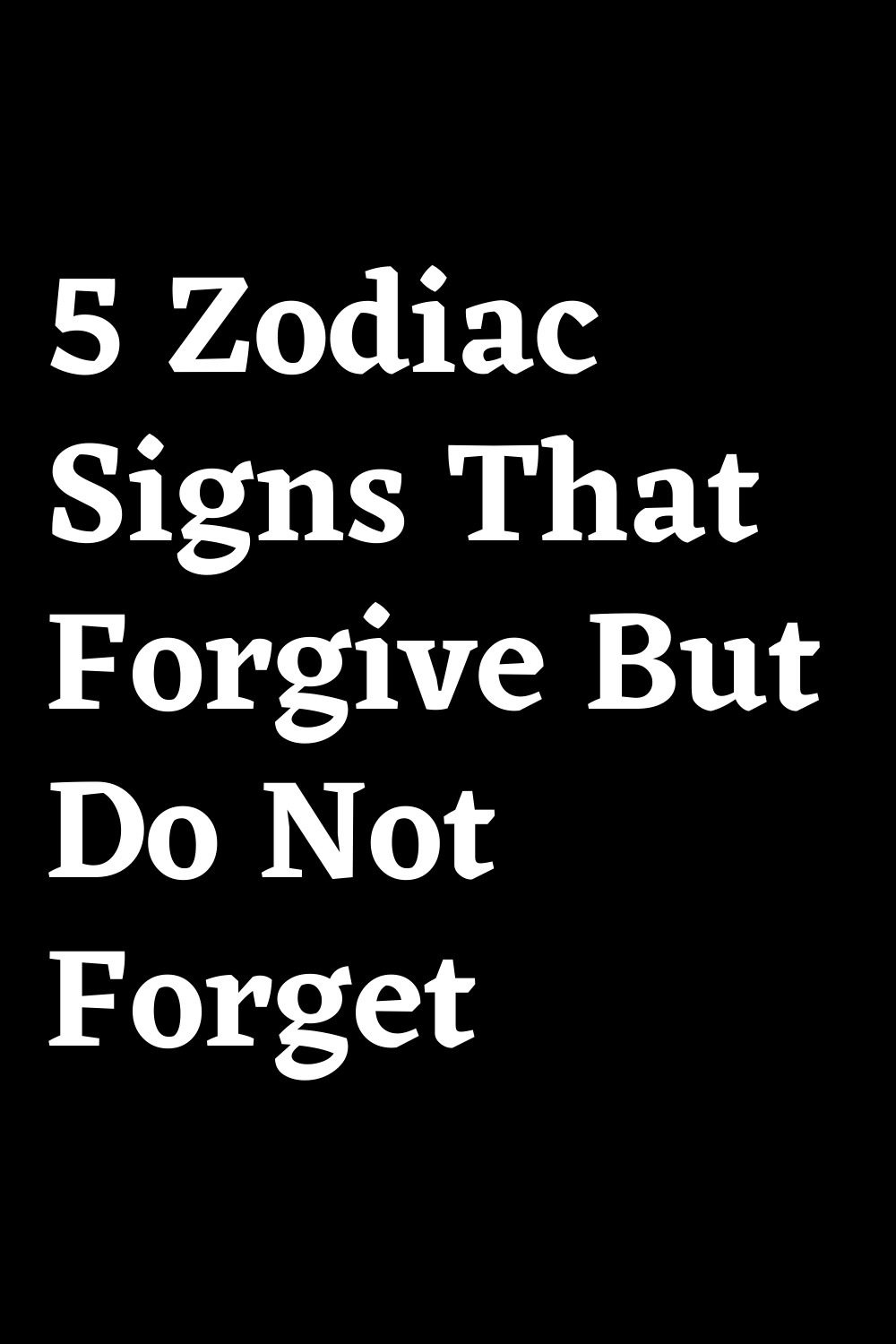 5 Zodiac Signs That Forgive But Do Not Forget

Sometimes when someone hurts us and breaks us into a thousand pieces, it is very difficult to forget and go back to being the same person as before. Some signs can be easily forgiving, but it is very difficult for them to forget. Everything will depend on how they feel at that moment. Because the signs that hold a grudge the most do so for something, not because they like it. Because forgiving and forgetting for having made those mistakes is not as easy as it seems. After all, any sign can forgive, but there are some who, no matter how much they ask for forgiveness, will never forget. NEVER. These are the 5 signs of the Zodiac that forgive but do not forget:

Capricorn forgives, yes. You may even worry about trying to fix the problem and discuss it with that person. But his cold temperament does not allow him to forget that damage that has been done so much to him. Because your subconscious is going to remind you from time to time, even if it is Capricorn himself who is trying to forget it once and for all. You will always be alert. Because if you already hurt once, they will be able to do it a second or a third. And Capricorn refuses. Enough that they already did it once.

But he’s going to make it clear from the get-go. He will tell you that he does forgive you, but be careful what you do. Because it will give you a chance, yes, but there will be no second or third. He will not bear that someone else comes to hurt him and less after having already been given a chance. In addition, Capricorn will always take every opportunity to remind you of what you did to him that hurt him. But he’s doing it for his own good because he doesn’t want to go through all that again.

Pisces wants to get along with everyone. He hates conflicts and that people are always arguing over nonsense. But if they make you angry or hurt, it will bring out your sensitive side and your heart. His head won’t stop spinning around the same topic, thinking about what might have happened to get there. Thinking about the wickedness of people and why they act like that. Although Pisces wants to forget and continue as if nothing with that person, they cannot. Because he realizes the damage that has been done to him and that nothing will ever be the same again. Because the damage is never forgotten.

No matter how sensitive Pisces is and no matter how much heart he has, he will not bear to be hurt again since everything is as terrible as it was. It is that Pisces forgives, because his heart cannot bear to get along with someone and because he knows that in the end the easiest thing is to be good with everyone. But he will hold a grudge and will leave sarcastic comments to remind that person that he has NOT forgotten. Because it will be difficult for your heart to forget all the pain you have suffered.

Scorpios always have high expectations of people and do not understand when someone hurts another person. This means that he is going to get very angry if he sees someone hurting another person or if he sees that someone is going to hurt him/her… So that person better runs away as far as possible until Scorpio reconsiders, decides to give a chance and accepts your apology. Because you can forgive, but you will always be disappointed with that person and with everything they have done. And all that disappointment will never go out of your eyes.

You may not express it in words or in deeds, but your face and gaze will tell you otherwise. And that could be even worse. Because no one may realize that the resentment is there, but it is. And it is that Scorpio is that strong sign, it is the most spiteful sign of the Zodiac. He will try to forgive you, but he will NEVER forget. And that does it so that you think and reflect on the damage that you have been able to cause. Because he wants you to learn a lesson and nothing to repeat itself again. Refuses to suffer or to see someone suffer because of you. It will not go through there again. Refuses.

It is the inner optimism of Sagittarius that allows him to forgive. His character makes him accept the apologies and come back with a smile. You will forgive more easily than the previous signs. He is able to forgive easily if he sees that whoever hurt him is sorry for everything he has done and if he sees in his sights that his words are being true and from the heart. Really hurting Sagittarius is hard. Because he is that person who does not usually offend anything or anyone and who does not care a bit what others say. But if someone really hurts you … You must pay the consequence.

And that consequence is that Sagittarius does not forget. You can try, but it will be difficult if that person cared too much for you. Because he had put all his trust in her and saw with his own eyes how they stepped on and broke her. You will never forget, that’s for sure. But it’s not going to waste time reminding you why it doesn’t. You should know that by now and take care of trying to fix it. Because it seems that Sagittarius is not affected too much by things, but I assure you that they do, a lot. That is why it will be very difficult for you to forget it. It will take time for the wound to heal, but still, the scar will always remain.

If someone hurts Aries, they are going to explode, that is clear. It is a sign of fire and it shows. Whoever is nearby can flee. Because if it is not going to burn, but fine. Because Aries releases fire from the mouth when angry. He is so strong for these things and so passionate for others. It won’t take long to forgive if you really see that you are doing it from the heart. And he will accept the apology with all his might. But this is not going to end like this.

His heart is not made of iron. It is going to be very difficult to forget all the hurt and all the suffering that you have been through. It may seem that you have indeed forgiven and that now everything is solved. But no. Deep down, that dagger is still stuck there. And it’s going to be very difficult to get it out. Because it has left its mark and is very deep. Because where there was fire, there will always be ashes and never better said. Also, Aries will always be on the alert. You will not trust again like you did before. For that fear of suffering again. He refuses to take out everything he has inside again to be able to defend himself. And for Aries, it is better not to forget than to suffer again.