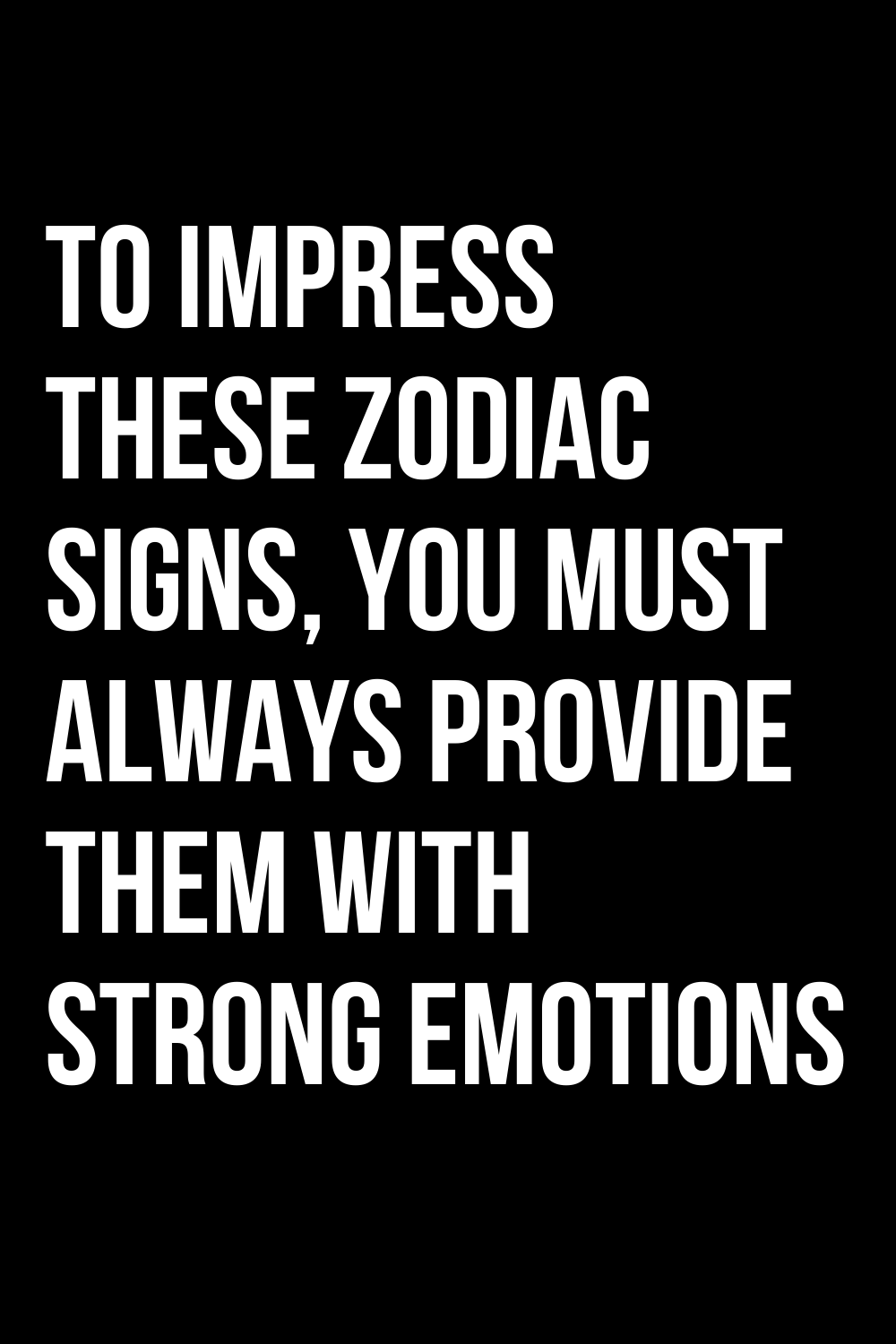 TO IMPRESS THESE ZODIAC SIGNS, YOU MUST ALWAYS PROVIDE THEM WITH STRONG EMOTIONS

The zodiac signs that love strong emotions are those to which you certainly cannot propose an evening in front of the fireplace. You have to jump through hoops with them! Curious to know who they are?

Maybe it’s you or maybe it’s your high school friend or that boyfriend you had when you were in your twenties.
We are talking about the kind of person who, if she is not stimulated by really strong emotions , gets bored or just thinks that you are not worth enough.
Hey, it’s not like that in life!
Let’s find out today ‘s ranking immediately (and let’s keep away from those who judge us based only on his standards).

The zodiac signs that love strong emotions: find out if you know someone in the top five positions

There are people who cannot really help but be ” victims ” of strong emotions . If they do not hear the screams or do not perceive a real sentimental storm, they do not believe they have a relationship of value in their hands!

Obviously, stars and planets know very well which are the zodiac signs that love strong emotions, so we asked them to help us with today ‘s horoscope ranking ! What we need to know, in fact, is which people will want from us more and more. Whether it’s a fight , big love gestures , or anything else that can revolutionize your relationship, these zodiac signs crave strong emotions more than anything else!

Ready to find out who only the top five in the horoscope ranking ?

There is no doubt that those born under the sign of Pisces are people with a minimum with their heads in the clouds … after all it is well known that Pisces live in a world of their own!
(And no, it’s not under the waves: those are a completely different kind of fish).

Pisces are people who love to live a romanticized life to the fullest, so if you want to impress them you would do well to show off some nice shiny armor!
That those born under the sign of Pisces are therefore signs that love strong emotions is practically taken for granted: now that you know it, get busy accordingly !

We know: you would never have said that Libra , so kind and genuine, would have appeared in the ranking of zodiac signs that love strong emotions .
Yet that’s right: those born under the sign of Libra love to experience truly extreme emotions!

This means that if you want to catch their attention or put yourself in a good light in their eyes you absolutely have to… make noise!
Libra likes strong emotions and if you don’t give them a little they will almost immediately lose interest in you. They prefer  bad boys who always give them a lot of trouble!

Those born under the sign of Cancer love a little bit of drama in their lives and… yes, they often fall victim to the pursuit of strong emotions . Often, in fact, Cancers do not realize how entangled they can be by the feelings and emotions they shake.

Dreaming of Prince Charming with open eyes, Cancers are often convinced that the more there are tears and trauma and… the better!
It must be said, at least, that Cancers are people who expect, sooner or later, even a little concreteness. You can keep their attention alive only up to a certain point: then you will have to show a minimum of good will!

Used as they are to being perfect, punctual and precise (hey, aren’t they also in the ranking of the most precise zodiac signs of all ?), Those born under the sign of Virgo love strong emotions very much!

One caveat: they will never admit it!
Virgo , in fact, is a sign that is particularly attracted to people who create a real whirlwind of adventures and impediments .
In short, they are attracted … by their opposites!

This sign, however, will never  knowingly  admit to being a person who loves strong emotions. You will have to believe in it on trust !

Gemini: first place in the ranking of zodiac signs who love strong emotions

DEAR Gemini , YOU ARE TRULY PEOPLE WHO LIVE FOR THE FLASH OF THE LIGHTNING, FOR THE MOMENT WHEN IT SEEMS TO YOU AS THE BOAT TOPS UP!
You know very well that you are people who are particularly sensitive to the idea of ​​living a life full of twists and turns and strong emotions.

Too bad that those who are close to you, sometimes, are not of the same opinion! If you want to make a Gemini
capitulate at your feet, you have to make sure you never let him know what your next move will be! Being mysterious, intriguing and completely impossible to predict is your best move if you want to conquer a Gemini.

Hey, you can check our ranking of the most dramatic zodiac signs to figure out who to get a cue from if you have no ideas!
Know that to conquer a Gemini , however, you have to be really intriguing!