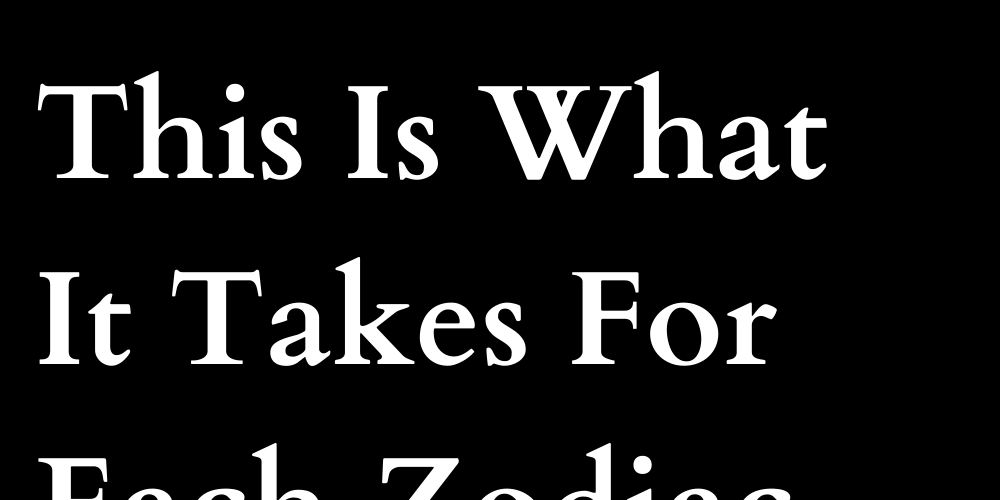 Aries: Let them say what they need to say, then make a big gesture to prove how much you care.

Aries understand that relationships aren’t always sunshine and rainbows. They can blow up quickly and let their temper get the best of them, but unless the issue was absolutely horrible, all they need is to get their feelings off their chest and then blow off steam. Once they’ve calmed down, performing a big gesture for them that proves how much you care will soften their heart enough to get back on track.

Taurus: You have to admit they were right, full stop.

Taurus signs are stubborn, and they often don’t believe they were wrong. If a Taurus sign indeed was on the wrong side of your situation, you have to wait until they conclude themselves. However, if you were at fault, the only path to forgiveness is to tell them you realize that. You have to admit they were right, without going on about your side of the story.

Gemini: You have an honest conversation without being defensive.

Gemini signs are big on communicating, and it’s how they prefer to handle conflict. Of course, it can be easy to get caught up in roaming tangents and get off-topic, but if you can sit down and explain your side of the story and say you’re sorry without getting defensive, they will likely forgive you. They understand that things aren’t always black and white, and are willing to see different points of view, but that doesn’t absolve you entirely.

Cancer: You spend quite a bit of intentional time, making it up to them.

Cancers become easily emotionally invested in people, and when someone hurts them, it hurts for a long time. They may want to forgive, but have a hard time forgetting. Seeking a Cancer’s forgiveness likely involves a lot of reassurance that you love them and that you didn’t mean to hurt them, and how sorry you are that you did. It might feel like a lot of effort, but it’s the only way to make them start to feel safe around you again.

Leo: You prove it was a one time mistake that isn’t worth throwing everything away.

Leos choose their company wisely, so when someone hurts them, it can cause a lot of frustration. They are angry that someone they love could hurt them and mad at themselves for not seeing it coming beforehand. On smaller issues, they will let things slide. Still, if you’re seeking forgiveness on a more significant problem, you have to show that what happened was a one-time situation that isn’t worth destroying your connection over. Ultimately the Leo will make that call, but it’s your best chance.

Virgo: You prove that you’ve changed and are trying to be better.

Despite Virgo’s critical reputation, they aren’t cold-hearted. When it comes to forgiveness, they actually would prefer to work things out than throw a relationship away. They don’t have tolerance for basic excuses, though. The only way to earn their forgiveness is to actually show them that you’ve changed or that you’re working on the problem. If they can’t see the change in you, they aren’t going to trust you.

Libra: You talk to them about the problem and take the initiative to make amends.

Libras hate conflict, and would much rather sweep it under the rug. When the situation can’t be ignored, forgiveness can be difficult- especially if they feel they are always forgiving. Taking the initiative to talk out the problem and make amends goes a long way for them, and shows them you care about making things right. As long as you’re not a jerk, they will likely forgive you.

Scorpio: You spend an extended amount of time trying to rebuild the trust back, slowly.

With a Scorpio, forgiveness isn’t a given. There really isn’t a quick fix here, because Scorpios are already wary about other people hurting them in the first place. Once it happens, they feel reassured in that fear, and it can take a long time to undo the damage (if ever). You will need to apologize to them profusely, but understand that they likely won’t accept it right away. If you ever want them in your life again, you’ll have to have plenty of patience and diligence to show them you can be trusted again.

Sagittarius: You give them a little space, then apologize straight-forward.

Sagittarius signs are optimistic, but they aren’t doormats. They won’t put up with someone hurting them, especially for no good reason. They tend to react harshly and defensively when someone causes them pain, and they need space to cool off. To actually get their forgiveness, though, they will need a straight-forward apology from you- not one that beats around the push or is half-hearted. They are blunt and open people and expect the same from others.

Capricorn: You admit what you did wrong without making excuses.

Capricorns are pretty stubborn and aren’t much for second chances, but it’s not impossible. They don’t leave much wiggle room for excuses or explanations- to them, what matters is you hurt them, and they want you to admit you were wrong for it. If you can’t swallow your pride and do so, they aren’t going to waste their time.

Aquarius: You give them space and time. They will decide if they can forgive you.

Aquarius signs genuinely care about the connections they foster. Given how selective they can be, it really cuts them deep when someone hurts them. They can be understanding and desire to let bygones be bygones, but knowing the reasons doesn’t always absolve the hurt. When it comes to getting their forgiveness, certainly apologize and give them space and make it clear you’re there whenever they are ready. They need time on their own to heal and determine if they can continue something with you, and they can’t be rushed in that decision.

Pisces: You sincerely tell them you’re sorry, then give them time on their own to process how they feel.

Similar to Aquarius signs, Pisces are understanding and empathetic people. They tend to hand out multiple chances to people because they understand their side of the story. The main issue is that Pisces feel so many emotions at once, they have a hard time deciding if they really should let someone back into their lives. An apology is necessary, but so is time to process what they are actually feeling about the situation, not just the other person’s feelings.