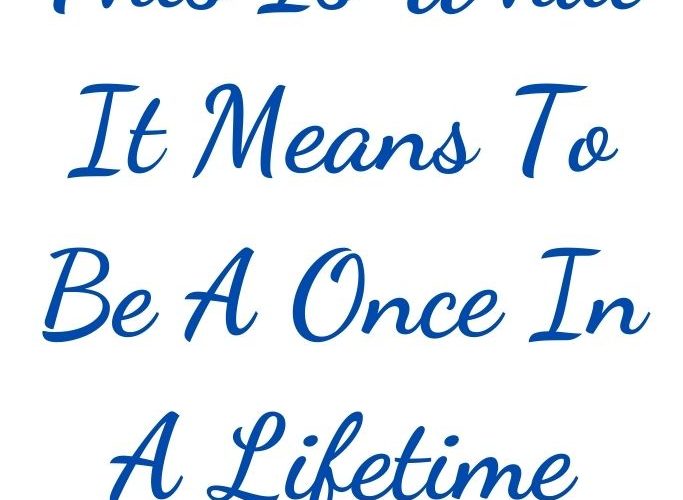 What does it mean to be a once in a lifetime woman?

Firstly, she’s rare. She’s one in a million and while some recognize her the moment they see her, others don’t until they lose her.

She’s not the kind of girl from quirky comedy movies, but a full-blown love story that haunts you for the rest of your life.

You either have to be one, or experience one to know fully. Nevertheless, there are some distinctive qualities that make her stand out everywhere she goes.

Distinctive qualities of a once in a lifetime woman

“Find out who you are and do it on purpose.” – Dolly Parton

A big part of a once in a lifetime kind of woman is her self-awareness. She knows what it means to work on herself and improve. In other words, she’s not immature, needy, or insecure.

A lot of men are surprised to see a woman who is very much her own person, doesn’t ask for permission, doesn’t fall for manipulation, and fiercely follows her own path.

Yet, she’s full of love and kindness towards everyone. She possesses a strong and unique personality that draws people in.

She knows what she wants and stands for. She has healthy boundaries and doesn’t compromise her ideals for anyone.

“The most beautiful thing you can wear is confidence.” – Blake Lively

This woman doesn’t need a tutorial on self-love. She’s an embodiment of it. It comes from her self-acceptance and that’s why everyone who comes in touch with her is thrilled by her.

Her self-acceptance makes her radiate confidence and inspires others to be themselves.

Her self-esteem is high because she doesn’t fall for rules imposed by others. No, she makes the rules for herself, to impress herself and the ones she loves.

That’s the most beautiful thing about her. Self-acceptance, followed by genuine joy. She’s the kind of woman you can imagine spending your life with, without getting bored.

“The beauty of a woman is not in a facial mode but the true beauty in a woman is reflected in her soul.” – Audrey Hepburn

Whoever is loved by this woman is blessed because her love is more than just occasional I love you.

She’s capable of showing the man she loves a whole new world. Because of her, he’ll start to believe in soulmates.

She’s capable of reaching the deepest parts of his soul and reminding him how mystical reality is just by existing and loving him.

She’s not just a pretty face or a beautiful image, she can touch much more than his body, and that’s why she’s unforgettable.

There’s nothing quite like her love and there are no words to describe the thing she awakens in a man. There’s something inexplicable that bonds her to you and that’s the thing you’ll always miss if she ever leaves you.

She’s proof that true love really does exist. She’s evidence that love and everything that’s inside is what makes a woman truly beautiful.

“There is only one success, to be able to spend your life in your own way.” – Christopher Morley

Authenticity starts where fear ends and everybody is attracted to courageous people.

The fact that such a small number of people aren’t afraid to live life by their own rules is what makes this type of woman even rarer.

She’s not afraid and that’s why she’s capable of doing many beautiful things that leave others in awe.

She’s capable of turning your life into a movie, from romance to adventure. She’s so unique that after her, everything you experience will feel surreal.

Ability to inspire others

The best part about her is that she brings light everywhere she goes. She inspires everyone.

She understands the importance of little things in life and never ceases to surprise you with how easily she touches the hearts of others.

She’ll inspire a man to be a better man and be his best friend too, and that’s huge.

The ability to make you feel like a man while still understanding all of your struggles minus the judgment is what makes her different from most women.

Her passion for life and improving things that need it, and sincere interest and understanding are what make her irreplaceable and one of a kind.

She’s not afraid to be on her own

“I was raised to be an independent woman, not the victim of anything.” – Kamala Harris

No matter how sweet and inspiring she is, don’t forget that she’s a woman who knows her worth and doesn’t compromise it.

She lets you feel like a man and make her feel secure. She appreciates it when you hold doors for her and make sure she gets home safe. And she lets you take charge.

However, that doesn’t mean she’s not independent, just in touch with her femininity.

If she is disrespected, she won’t hesitate to leave the situation she’s in because she knows she can take care of herself. She’s not afraid of a broken heart or living life on her own.

There’s no upgrade after her…

After you experience a once in a lifetime woman, you’ll soon understand that there’s no other woman who can replace her. She’ll change your life forever. She’ll set a new standard.

If she leaves, feelings won’t. She’ll haunt you and the feelings will stretch throughout time till they turn into regret. That’s why you should treat her accordingly.

Don’t take her for granted. Show that you appreciate her every day. Don’t let her be the one who got away.
Don’t let yourself lose the best thing that’s ever happened to you.