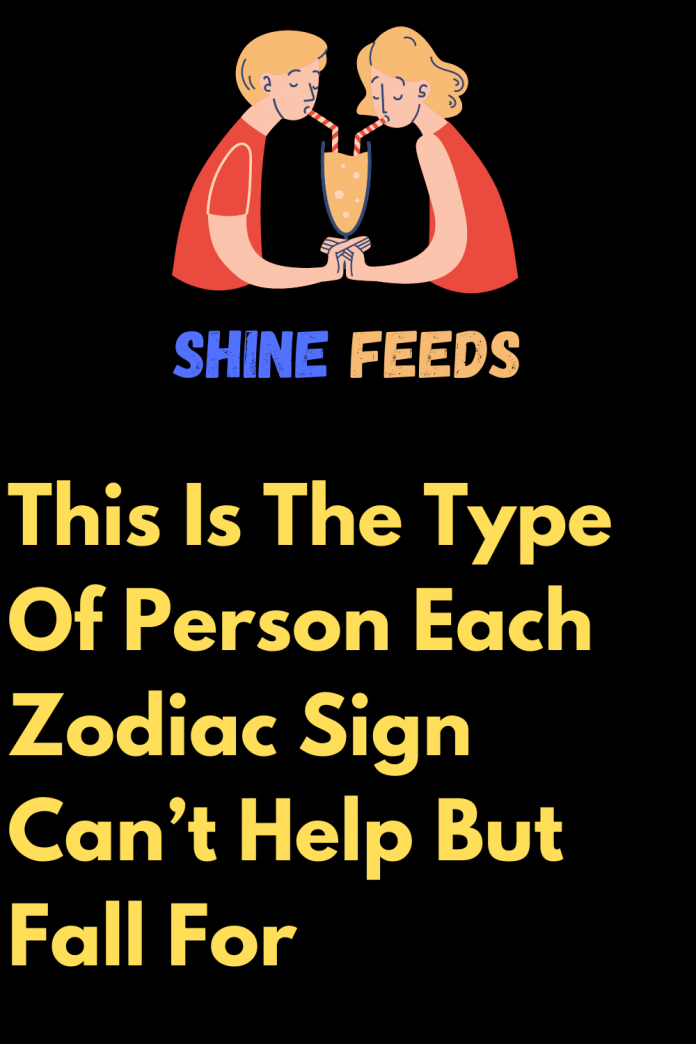 Aries: The spirited, stubborn one

Aries are a sucker for high-spirited types. They want someone that matches their energy without overshadowing it. They want to be the one leading the way, but if someone challenges them or calls them on their crap (in a flirty or honest way), then they can’t resist. They strive for a balance, but they want a partner that pushes them forward, not someone that holds them back.

Taurus: The well-polished, popular one

Taurus types may give off a reserved vibe, and their standards are relatively high when it comes to their interests. However, Taureans are just as into their image as the next person, so when they come across someone polished and put-together, and well-liked by everyone? They’re already swooning. They enjoy being pampered and returning the favor, and they only want people in their inner circle who exude luxury.

Gemini: The shy, quiet one

While they might continuously be talking a mile a minute and on the move, Geminis find themselves powerfully drawn to the reserved, shy types. They like a challenge, but they also strive to have conversations with people who genuinely listen. They like to bring people out of their shells, but they also enjoy the connection they often feel from those who are shy upon first meeting. They know there is always more than meets the eye.

Cancers are known for being head over heels in love with love. They want the real deal, and they won’t settle for something that doesn’t move them. Nonetheless, there are all sorts of people in the world who know how to smooth talk and say just the right thing- and a Cancer is putty in their hands when they do. Someone who can whisper sweet phrases in their ear and tell them how in love they are with them is the perfect bait for a Cancer.

Leo: The one who pushes their buttons

Leos know who they are- or if they don’t, they still know they have a purpose. They aren’t afraid to embrace themselves and exude confidence. People are drawn to them because of their self-assuredness and the talent that often comes with it. Yet ironically, Leos can’t help but focus on someone who pushes their buttons. People who challenge them and keep them on their toes are ones they are enamored with. Usually, this is because it means they have to “prove” themselves and show off. If someone isn’t thoroughly impressed with them, they have now made it their mission to change their mind- which is a change of pace for them.

Virgo: The messy, unpredictable one

Virgos are known to be neat freaks and slightly controlling over their own lives. They have a plan, and they are going to stick to it. They don’t want to waste time and often don’t find themselves involved in relationships by their own choice. However, if someone stumbles into their life that is messy and a little unpredictable, a Virgo might have to do a double-take. The person doesn’t have to be messy in a literal sense (though they can be), but Virgos like a project- they enjoy helping and fixing things to make them better. They like to have a grip on their life, but when someone challenges any of that or has a chaotic life themselves, a Virgo feels a pull that they can’t always explain.

Libras are given a bad reputation for not making decisions, but when it comes to a partner, they know what they want. They may desire balance and harmony, but they can’t help but fall for someone who fills the “Prince Charming” role and showers them with adoration. They don’t necessarily have to have strong feelings for the other person, but they will swoon over someone who worships the ground they walk on.

Scorpio: The one who plays “hard to get”

We all know that someone who errs on the side of mystery and intrigue holds an undeniable attraction- and for Scorpio, this is multiplied by 1,000. They are direct in their approach and aren’t afraid to put their money where their mouth is. They are used to being the one others are falling for, so when they meet someone who stays just out of their reach? They’re hooked.

Sagittarius: The open-minded one

Sagittarius signs are always on the go, but they are just as interested in exploring the mental as they are physical. While someone who likes to travel and keep up with them is essential, they usually end up crushing hard on those who are open-minded about all the possibilities. Confidence is great, but anyone who insists they are right and their way is the only way is a huge turn-off. If they meet someone who can challenge their conceptions on theories, ideas, and everything in between, then they will fall faster than they could imagine.

Capricorn: The one who seems to have their entire life together

Capricorns value love and loyalty, but they place a large amount on respect. They appreciate good looks and loyalty, but if they have respect for someone, they find themselves enamored without a second thought. They spend a great deal of time working on their lives and working hard to achieve their goals. When they meet someone who seems to have their entire life together, they are irresistible in a Cap’s eyes.

Aquarius: The strong-willed, independent one

Aquarius signs are usually the first to claim they don’t need anyone, and even more so, the first to deny when someone causes them to feel something. They prioritize freedom and the ability to express themselves without restraint. Nonetheless, when they stumble across someone who is also fiercely independent, the butterflies show up. They like someone who doesn’t need them, and who give them space to be their own person- if they meet someone like that, then it’s game over.

Pisces: The one who needs saving

Pisces have a romantic soul and giant heart, but romance doesn’t necessarily cause them to get weak in the knees. They are idealistic and try to see the best in anyone they come across, but they have a particular place in their heart for those who need someone to help them. When they meet a person who has a heart of gold but needs a shoulder to lean on, a Pisces feels beyond compelled to step in and save the day. They like knowing they are needed, and they will fall head over heels for someone who needs a hero.