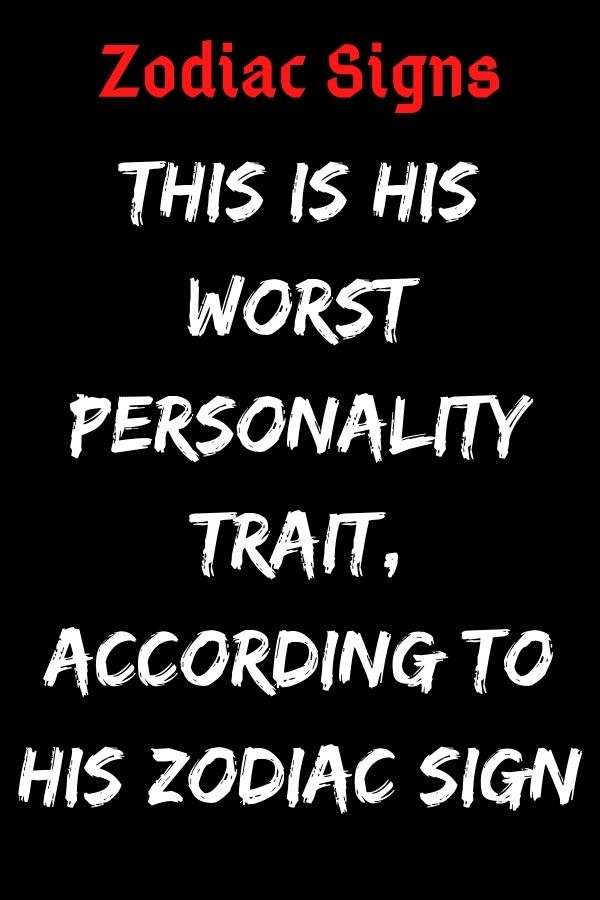 None of us is perfect. We all have some negative qualities and characteristics we wish to hide from the rest of the world.

The truth is that sometimes you waste years before discovering someone’s true face and dark side.

And that is exactly why we’re here—to spare you the trouble and to reveal to you your man’s worst personality trait, so you don’t have to do it on your own.

If your boyfriend belongs to this zodiac sign, the worst thing about him is that he tends to be bossy.

An Aries acts as if he’s above everyone else, including his significant other.

This guy wants everything to go his way which usually makes the other person feel subordinate and that is not how a healthy, mature relationship should ever be.

Being an earth sign, the worst personality trait of a Taurus man is his stubbornness.

Even when this guy knows that he’s made a mistake, he’ll never admit that.

Remember, a Taurus always sticks to his attitudes, and even though this is sometimes a good thing, if you plan to change him, think again.

When it comes to Gemini men, the truth is that you never know where you stand with them. Is he joking?

Is he being serious? What will he do next? We can only guess and hope for the best.

If you ever decide to break up with a Cancer, beware! Prepare yourself for tears, desperation and clingy behavior—all coming from him, of course.

A Cancer’s sensitivity is at the same time his most amazing and worst personality trait because despite being empaths, they’re also known to be emotionally weak.

Even after you spend your entire life with a Leo, you never get used to his enormous ego which usually can’t fit into a room.

No matter how much this guy loves, you have to deal with the fact that he’ll always love himself more. However, it gets even worse.

Every Leo actually has a bunch of deeply-rooted insecurities carefully hidden behind his false confidence and vanity.

A Virgo man will push you forward and believe in you—which is amazing, right?

Until it gets annoying. Until you start to feel like nothing you ever do is ever good enough.

Until their nagging and over-demanding nature drains the life out of you.

A Libra’s worst personality trait is without doubt his indecisiveness. A Libra man never knows what he wants, and he never goes to get it.

Let’s face it—sometimes, this is exactly what we need from our strongest halves.

Instead, when you’re with him, you feel like you’re always the one taking all the initiative which becomes tiring with time.

A Scorpio never forgets. And I mean it—not in a million years, not when he forgives you, and not when he pretends he did.

The moment you insult or hurt this sign in any way (even if you did it unintentionally), expect his revenge because it will come for you sooner or later.

The worst personality trait of a Sag male is that he has no scruples. When this guy sets his mind on something, there is nobody who can stop him.

A Sagittarius is obsessed with success which makes him overly competitive, so don’t expect from this man to be happy for you when you reach your goals.

If you date a Capricorn man, prepare to be used and taken for granted.

Even though this zodiac sign doesn’t appear to be like this, the truth is that most Capricorns are actually pretty selfish and that they rarely think of the consequences of their actions.

An Aquarius will make you feel emotionally neglected—I can guarantee you that.

At first, this guy will appear mysterious which will probably be a challenge for you.

You’ll want to get to the bottom of him, thinking that you’re the only one who can crush his walls.

However, this won’t happen because an Aquarius doesn’t put his guard down for anyone.

Pisces are always the victims. No matter what he does and how badly he treats you, a Pisces man will somehow find a way to make himself the good guy and you the villain.

When you first meet this guy, you assume that he is just overly sensitive, but the truth is that his entire behavior is just a part of his tactics to gain sympathy and manipulate you.