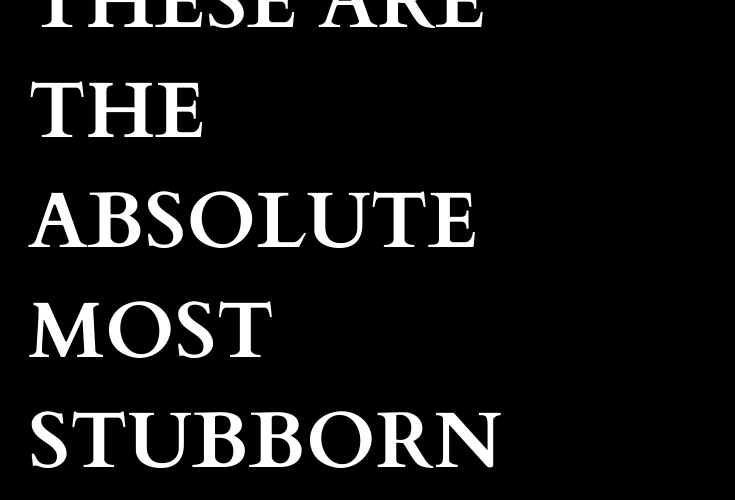 These Are The Absolute Most Stubborn Zodiac Signs

Taurus knows what they like, and they don’t care to venture far from it. People underestimate how much Taurus signs invest in creating their environment- from their selective friendships to their particular careers, to where they live and how it’s decorated. They spend a great deal of time setting things up the way they want because they believe it’s best for them. So challenging them to step outside of their comfort zone, or admit they’re wrong when they think they are right? You’re fighting a losing battle there.

Aries aren’t represented by the ram for nothing. They are headstrong and unafraid of conflict because they are confident they will win. They are competitive and honestly welcome a little resistance to keep things interesting. Still, when it comes down to it, they won’t cave in just to appease another person. They are a little impulsive and prefer to take action quickly, so if you try to talk them out of making a decision they are already set on, be prepared to debate about it until you’re both exhausted.

On the other side of things, Virgos are well thought out planners. They take an exceptional amount of time to mull things over before they present their argument or opinion to someone else- and you’re very unlikely to talk them out of it. While they can have some flexibility in certain situations, it’s pretty uncommon for them to simply concede to someone else’s idea without discussing it over a long period of time. When Virgos know they are right, there isn’t much of anything that will change their mind.

Capricorns keep their head to the ground and keep moving towards their goals- they don’t have time to argue about the slight nuance a person threw at them. While they understand that they won’t always be right, they’ve taken the time to research their ideas and look to their past to back them up. They’ve had a great deal of experience to refer to, and they won’t bend over backward to anyone who doesn’t match them in that area.

Scorpios can be very flexible in love and in friendships- but before they’ve established a connection or after one is severed? They’re completely rigid in their stances. Scorpios won’t hesitate to cut you off simply because their best friend hates you. They won’t ask for explanations or really want to hear them- if you hurt them or someone they know, it’s unlikely you’re ever going to change their mind about you. They will stick to their guns to the very end without regret.

Leos are definitely among the types of people who want others to like them and make them happy- but that doesn’t mean there isn’t any stubbornness. Leos hold a great deal of pride in themselves and their accomplishments, and they don’t shy away from making that known. If anyone tries to outshine them or humiliate them in front of other people, they’ll dig their heels in hard. They are kind and nurturing, but their ego can undoubtedly get in the way at times.