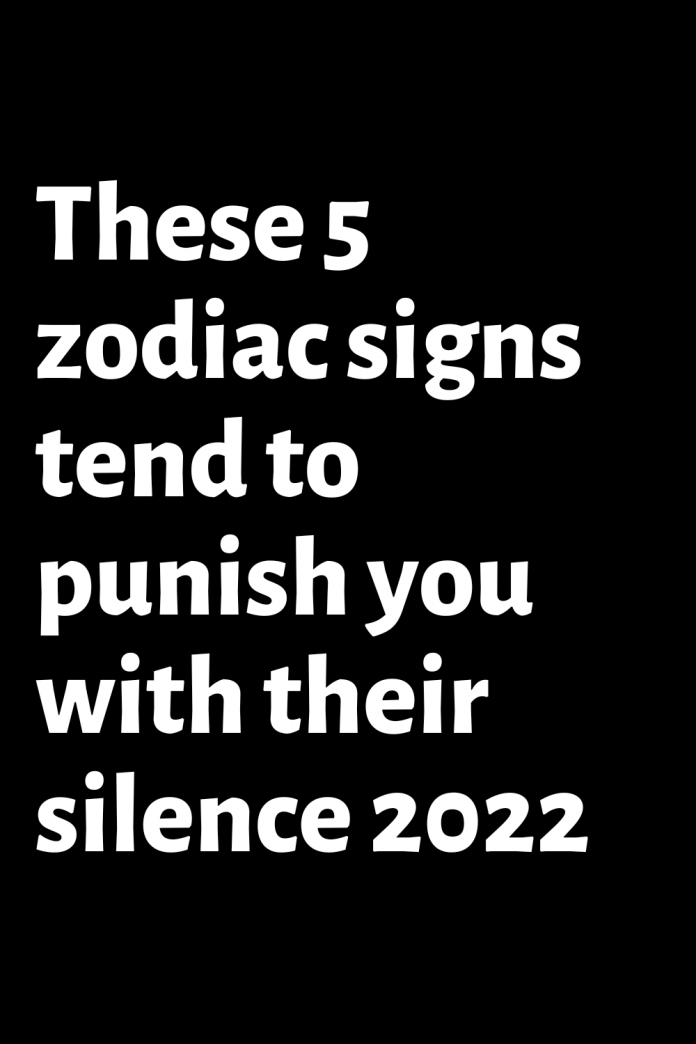 Some people make you feel like you’ve done something wrong by giving you the cold shoulder or by keeping you silent. If you find yourself treated like this by your partner or another important person in your life every now and then, you may hate the feeling.

According to astrology, there are some zodiac signs who use this strategy to enforce their justice or to tease a certain behavior out of the other. These 5 zodiac signs tend to punish you with their silence:

If an Aquarius wants to punish you with their ignorance, you can expect that it will be permanent and that it will really hurt – at least until you realize your mistake. Aquarius is not someone to run away from what bothers them and if it is their fault they will face their mistakes. But if everything that happened between the two of you was your fault, and you either gave him a half-hearted apology or even no apology at all, you can wait forever for him to talk to you again.

One thing that people often forget about Aquarius is that they are masters at giving others the cold shoulder. Not only will they show you their anger by turning their backs to you, but they’ll also ignore your messages and even drag your mutual friends into it. You don’t need such negativity in your life and you certainly don’t need a friend who can’t admit when he’s wrong. Say goodbye to the friendship if his behavior hurts you too much. However, if you are to blame, at least try a sincere apology.

A Sagittarius is really good at silencing others, but not because they want you to know how upset they are with you. In fact, there’s a good chance he won’t even think about what made him so angry in the first place. And not because the matter no longer matters to him or because he has simply forgotten it. He just moves away from people who once let him down.

Sagittarius can be really cruel, but only because they’re so cold. While there are ways to get back into friendship or relationship with him, know that it won’t be easy. Once he ignores you and stops talking to you, it will take a while for him to warm up to you again. Because once you get into that zone, frankly, your Sagittarius doesn’t even care about you anymore. Try to be patient and slowly approach again. An apology could break the ice and bring you back together.

You won’t necessarily lose a Virgo forever if you ignore her, but that doesn’t mean it will hurt less if you are treated like this by her. The Virgo endures a lot every day and tries to cope with everything that life throws at her with grace. And while she knows how to take other people’s crap pretty well, she’s pretty cold when you lose her off.

When a Virgo is angry, she tends to fall silent straight away and go into ignore mode. Not because she hates you so much. She just doesn’t want to talk to you anymore. The Virgo likes to ignore anything and everything because it gives her an excuse and allows her to get away from everything she has to do with. She no longer has to think about the argument you had with her, nor does she have to evaluate or analyze anything. Once she’s removed from her stress, it helps her to clear her mind and clear everything else as well. For those whom she punishes with silence, however, it can be less pleasant.

Pisces also tend to silence others when they are injured. If a fish exhibits this behavior, it’s because they feel like they’ve received an emotional slap in the face. The Pisces selects all of their relationships and friendships with care and love. If someone hurts him so badly that he ignores that person, the Pisces needs to take a step back and really think about the relationship with that person.

Pisces don’t like being mad at someone at all, so it goes without saying that this behavior is by no means easy for the Pisces. But Pisces feelings are just as important as anyone else’s.

Capricorns may have a much higher tolerance than others when someone upsets them, but that doesn’t mean you can always trample your feelings. One should not assume that nothing or no one can upset a Capricorn, because that is simply wrong. Capricorns will warn you if you get on their nerves or hurt their feelings before they run away angry and ignore you for a while. In his defense, he at least tried to be the adult of the two of you and talk to you normally before excluding you from his life.

It just seems childish to him to yell at himself or get upset when you’re upset. Capricorn has a feeling that if people cannot handle their emotions at an adult level, then one cannot handle them at all. In this case, he prefers to distance himself completely from the problem and exclude these dramatic people from his life. It is so common with this sign that it knows exactly what it wants and will enforce it. So when it does happen, you can be sure that he made this decision consciously because he is damn mad at you or the situation.