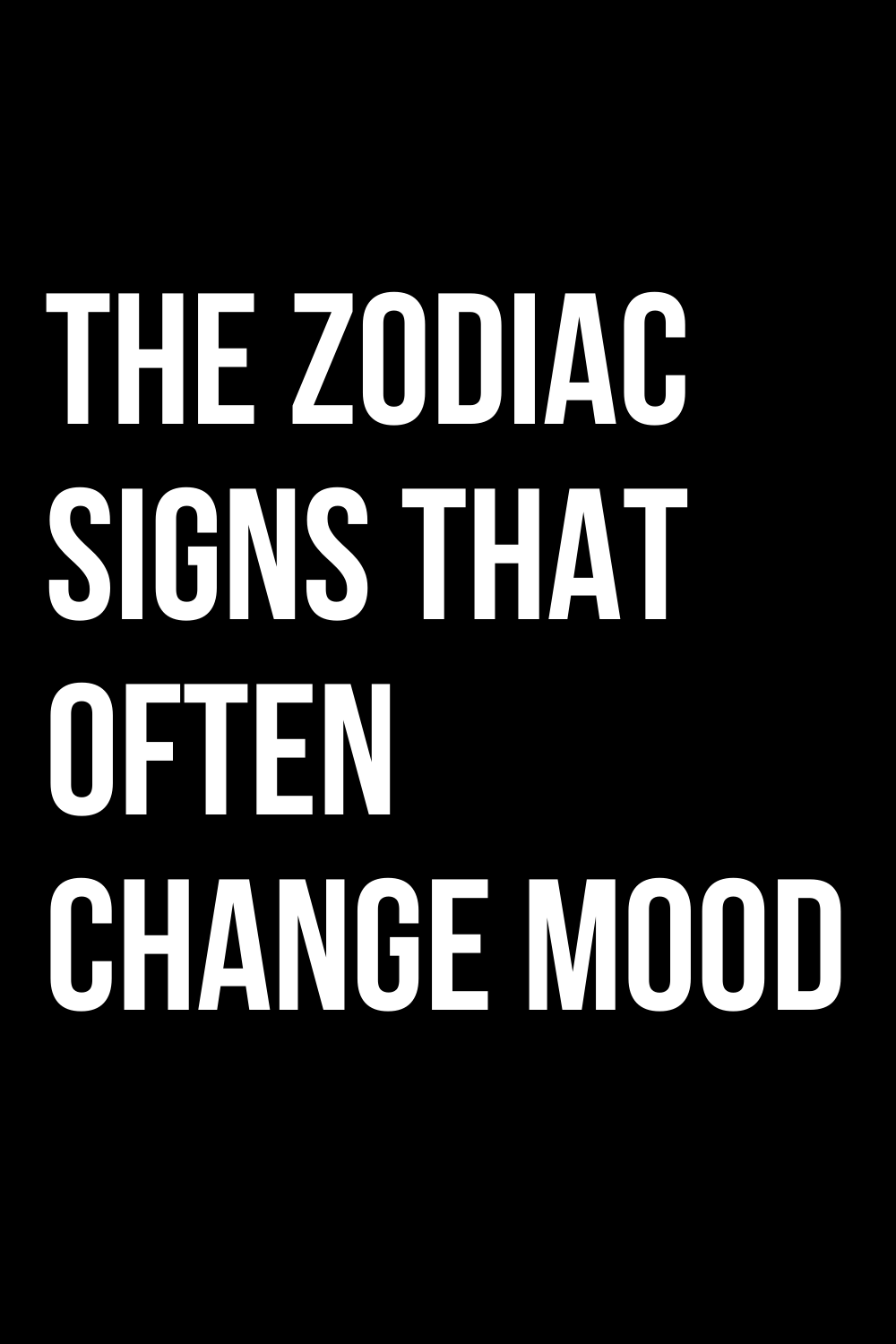 Find out which zodiac signs change mood most often and why they do so.

When dealing with others, you always hope to find people who are smiling and as positive as possible. People in a good mood are socially more appreciated as they tend not to burden conversations and always know how to make a smile. Strange as it may seem, however, there is a category of people that tends to destabilize even more than those in a bad mood and these are those who change constantly, making it difficult to relate to them or predict in what state they will find themselves in a particular situation. These are people who fluctuate from a good mood to a bad one and often for no precise reason. This is partly because of their character but mostly because of the influence the stars have on them.
Today, therefore, after seeing which are the most mysterious zodiac signs and which are the signs of the zodiac who love gossip, we will find out which are the ones that often change the mood. Since this is a way of doing that has a lot to do with feeling, the advice is to also check the profile of the ascendant to have a more complete picture.

Aries – In a slightly variable mood
Those born under the sign of Aries live a long day and tend to be guided by emotions and what happens. This makes them people who, if from a certain point of view can be considered on average stable and with a usually positive mood, now and then they tend to vary and become unpredictable at times. This usually happens when they receive some bad news or when they are tense because they fear they will not be able to achieve the goal they have set for themselves. Fortunately, these are fleeting moments that tend to pass relatively quickly and without them saying anything.

Taurus – Rather stable
The natives of Taurus appear to be in a fairly stable mood. This is because basically, they have a calm temperament that leads them to experience both positive and negative events moderately. Of course, they too, like everyone, have periods in which the mood tends to fluctuate but they are quite good at hiding it and only those who know them well can notice the difference. With colleagues, not extremely close friends and acquaintances, they try to always look the same, thus avoiding uncovering, which for them would be a sign of vulnerability.

Gemini – Extremely unstable
Those born under the sign of Gemini are those within the zodiac who tend to change mood more easily. Unstable by nature they can go from a good mood to a decidedly bad one in a very short time. This happens because, extremely humoral, they allow themselves to be guided by events, taking everything head-on and often acting without reasoning. So, when they feel that there are too many unknowns they tend to get nervous and withdraw into themselves only to get back in a good mood as soon as their perception of things changes. It is a way of being that is part of them and that is unlikely to change. At the same time, it is also part of their charm as they manage to experience everything with such a range of emotions that they are always interesting and never heavy or boring.

Cancer – Always ready to change moods for
the worse Cancer natives love to appear as sweet, calm, and always positive people. In reality, they harbor a series of conflicting emotions that often lead them to change moods. When this happens it is always negative and this largely depends on their being touchy. If they feel stung, they tend to take it out on everything and give the worst of themselves, becoming grumpy and sometimes even aggressive. The situation changes only when you can make them change their mind, bringing them back to a better mood.

Leo – Quite oriented towards good humor
Those born under the sign of Leo are always positive and in a good mood. Kind to everyone they love the idea of ​​bringing a breath of joy into other people’s lives. As often happens, however, they have another side of the coin that sees them as people who, if they do not receive what they expect, suddenly change their mood. In their case, it is the attention of others. Needing to always feel at the center of attention, they keep themselves cheerful as long as this happens. When someone dares to focus on something else, however, they can become sour and even grumpy, showing an unprecedented part of themselves but no less real than the most positive.

Virgo – Unpredictably unstable
Virgo natives are often insecure people and this can make them quite moody. Pessimists by nature are not often in a good mood but as long as they can maintain a constant in their way of being, dealing with them is quite simple. The real problem is when they are strangely in a good mood. In this case, they succeed so well in their intent that they can bring the sun into the lives of those around them. The problem is that all it takes is one look, a word, or even the smallest gesture perceived in a negative way to make them go from day to night and make them so negative that the atmosphere is suddenly gloomy. With them, therefore, you can never completely relax because the change of mood is always lurking.

Libra – Generally stable
Those born under the sign of Libra live in moderation. This means that even as regards the mood, the trend is always neutral. As with other aspects of life, they tend to have both positive and negative reactions, maintaining a semblance of normality that makes them relaxing and, in their way, reassuring. Of all the signs of the zodiac, they are therefore the most staid and certainly least likely to change moods without a real reason. When this happens, however, the difference is such that it is impossible not to notice it, because accustomed as they are to filtering everything, once this ability is lost they are no longer able to mask their emotions. However, it is something that in the course of life can happen to them so few times that they can be counted on the fingers of one hand.

Scorpio – Quite stable
Scorpio natives like not to show what they feel, especially when they are among people they don’t exactly consider trustworthy. We can therefore say of them that they are in a fairly stable mood at least as regards what they decide to show. In reality, within themselves, they find themselves having quite frequent changes, some of which are even sudden, especially if in a negative way. A situation that occurs especially when they feel hurt or attacked by someone and their defense instinct prevails, leading them to withdraw into themselves or, even worse, to attack those they believe to be in the wrong.

Sagittarius – Mutable
Those born under the sign of Sagittarius have a decidedly changing mood which, more often than not, depends on how they decide to see things. It can therefore happen that their mood changes are completely unpredictable and inexplicable because unless you say what prompted them to do so, it will be impossible to understand them. It is a way of doing things that often creates problems for them but that despite everything they are unable to change. For this reason, they often feel misunderstood even though they are, basically, the very cause of the problem which could be easily solved if they started saying what they think without starting after having an idea, sometimes even wrong, of things.

Capricorn – Sumptuously Changeable
Capricorn natives don’t change mood often and when they do it is usually because they suddenly feel melancholy or sad. Their way of expressing similar emotions is therefore rather moderate enough to be noticed only by those who know them well or have a good spirit of observation. For the rest, they always appear calm and neutral. Able to communicate with others without pouring out their emotions on them. This is why they are notoriously appreciated as quiet and predictable people, and this even if they have many more thoughts inside than they let on.

Aquarius – Stable
Those born under the sign of Aquarius appear stable as few. This is because, not having a great social life, they manage to relegate their mood swings to moments of solitude. When they decide to deal with the world, they tend to always be in a good mood and with a base of serenity that allows them to feel at ease. Thus, it is really difficult to find them gloomy unless you invade their spaces and force them to interact on the days they choose to isolate themselves. The situation in which, among other things, they would appear in a bad mood just for being disturbed.

Pisces – Emotionally Unstable Only
Pisces natives are unstable when it comes to mood. Their empathy pushes them to often take on the emotions of others, carrying them on like burdens that end up worsening their mood. Being always attentive to those around them, they are so good at hiding what they feel that they still appear calm and carefree even when inside they are suffering. This means that for the world they are stable and calm people while inside they live so many emotions that few will ever be able to understand. We can therefore say about them that despite often changing moods and being emotionally unstable in the eyes of the world, they manage to maintain a composed and stable air.