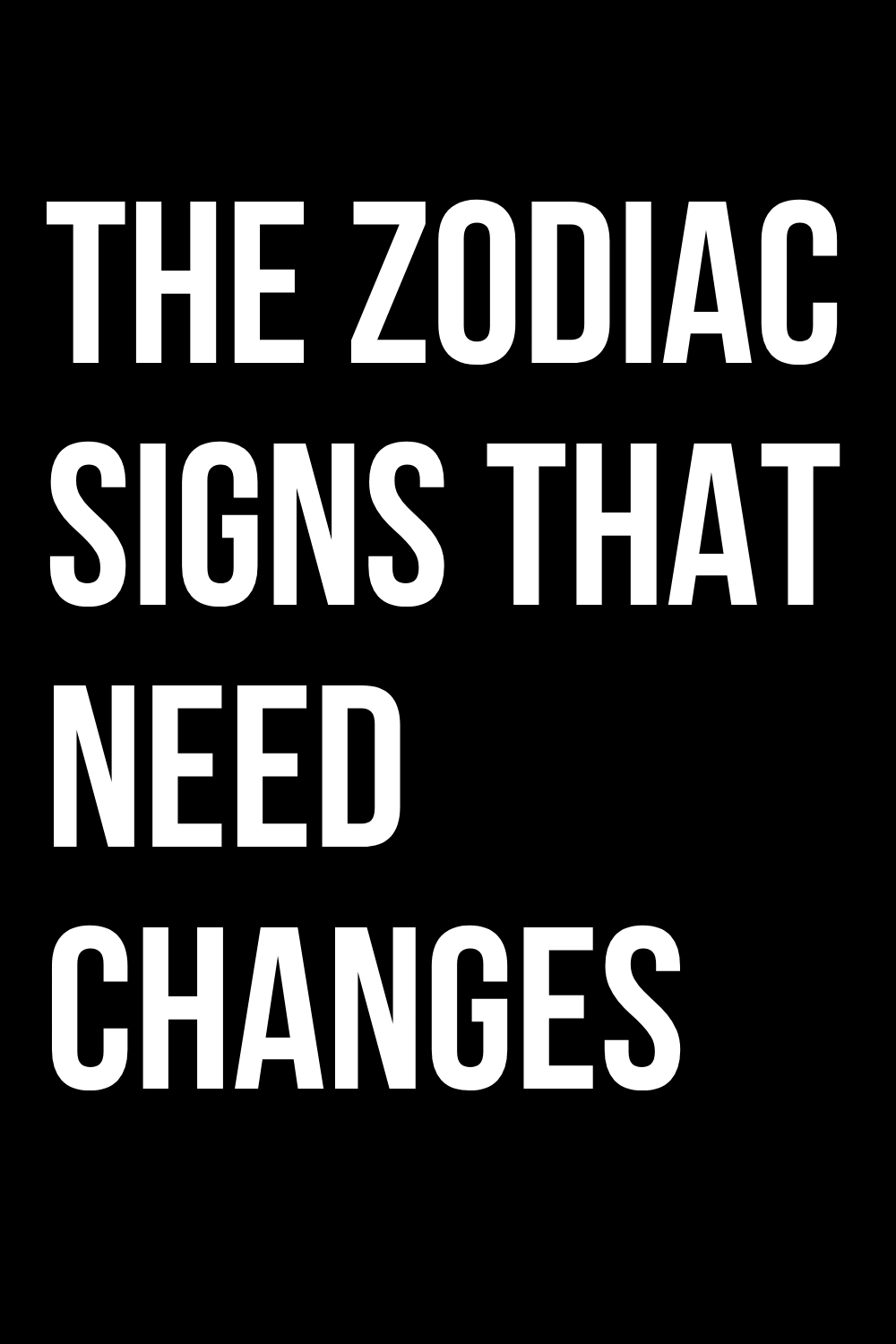 THE ZODIAC SIGNS THAT NEED CHANGES

Find out which are the zodiac signs that need changes before the new year arrives.

Changing is part of the human being. There are people more inclined to do so and others who, on the other hand, do not like the idea of ​​leaving what they know to go into the unknown. Nonetheless, there are times in life when, like it or not, change looms as something indispensable.
Thus, by the middle of the year, many signs find themselves in the position of having to change something to improve their lives. And while some can’t wait, others seem rather reluctant to embrace the idea of ​​change.
Today, therefore, after having seen which are the zodiac signs that need confirmation in love and which are the most mysterious ones, we will find out which signs need to bring about changes in their life.

Horoscope: The zodiac signs that need a change and those that, on the other hand, are fine as they are.

Aries – Those who are fine how and where they are
Born under the sign of Aries love to change but does not experience it as a necessity. Given the new year, they do not seem inclined to take action in this sense and this is because, all in all, things are fine for them as they are. For this reason, they prefer to keep things as they are, following the course of events and making any changes here and there. Although they are active people from different points of view they are less so when it comes to everyday life that they tend to live more like a routine in which to insert some small variations from time to time.

Taurus – Those who love static
This year the natives of Taurus seem more attracted to what they have than to what they might have. Although the conditions for making improvements in their lives are all there, they tend to prefer a stillness that goes well with their love for routine and the simple things, those that they know and are familiar with. For them, therefore, there seem to be few new arrivals and at the same time, they do not feel the need. The only exceptions? Surprising and special news such as the arrival of new love, a birth, or a wedding.

Gemini – Those who live by changes
Those born under the sign of Gemini tend to pull themselves out of the equation a bit, being people who have a constant need for change. For them, every moment of boredom is a condemnation from which they try to escape in every possible way through the news. For this reason, also for next year, they need to implement changes and this even if for their way of living things it is more about living them when they arise than making them concrete in person. After all, their entire life revolves around the need to create situations that can lead them to the news.

Cancer – Those who don’t need changes
Cancer natives love to be in their comfort zone. For them, any change amounts in part to a loss that saddens them making them certainly less happy than it would be for others. There are few changes that they accept positively and this makes them people who will not need to vary their lives during the year. At most they will be able to accept some small news but only if this is spontaneous and easy to implement. Otherwise, they will always prefer the old way to the new one, sure of their ideas and ready to support them.

Leo – Those who aspire to change
Those born under the sign of Leo live to improve and this implies a certain series of changes to be applied to themselves and to the situation they live in. This always makes them well disposed towards new things, including those capable of upsetting their lives. Also for this year, therefore, they will be more than willing to change, although theirs is not so much a need as a wish that is made given the many projects they have in mind and that they would like to see realized as soon as possible.

Virgo – Those Who Would Prefer Not To Change Too Much
Virgo natives are smart enough to understand when changes need to be made in their daily lives and when they do they try to be proactive. Unfortunately, however, their nature often tends to betray them, leading them to hope not to change too much. Habitual and not exactly positive, in fact, they never manage to look at the new without hesitation or worries and this creates in them an underlying rigidity that pushes them to be restrained in some way. That said, they know very well that they cannot oppose certain dynamics and in some way, they too will see themselves at the center of some change. Fortunately, it will touch them closely without upsetting their lives, which for them is already a more than positive fact.

Libra – Those who are intrigued by changes
Those born under the sign of Libra have a strange relationship with changes and this is because if on the one hand, they appreciate them, on the other hand, they always fear that things may change differently from how they wish. They are therefore quite open to the idea of ​​change but only when they can predict how things will evolve. Otherwise, they always wait before making a pronouncement, remaining as if they were waiting. They are therefore people who usually do not feel the need to change unless they are in the middle of situations that they just don’t like. This is why in 2019 they will feel more pushed towards perfecting things rather than towards total variation.

Scorpio – Those who experience a change in their way
Natives of Scorpio also have a changing attitude towards change. Constantly evolving, they are aware that they need news to grow and improve, nevertheless, they can sometimes be inelastic if faced with unexpected events that they had not calculated. That said, they are always able to cope with any kind of change and never before know-how necessary these are to progress positively.

Sagittarius – Those who only need certain changes
Those born under the sign of Sagittarius love to change only when it suits them and would even like to be able to choose on what to make the changes and whatnot. Lovers of their comforts have some aspects that they prefer to keep unchanged while they like the idea of ​​being able to experiment with new things on others. Things don’t always go as they would like and when they do they tend to get nervous showing everyone their bad mood. Exactly what they could do before 2020, as the next six months could bring them some more changes than expected.

Capricorn – Those Who Wink at Change
The natives of Capricorn are pretty good at adapting to novelty. For this reason, it can be said of them that they are inclined towards the changes that they accept willingly and with almost always proactive action. A constant that will become such also in the second half of this 2019, in which the changes will occur, albeit not too big and with timelines that will allow them to adapt in time, organizing everything you need to face everything with the right serenity.

Aquarius – Those who prefer to avoid changes
Those born under the sign of Aquarius are people who love the stillness of life and who prefer to carefully avoid changes when they can. For them, staying as they are is a hope that they constantly try to turn into reality and when they fail they strive to make the changes as less invasive as possible. Thankfully, for them, this second half of the year doesn’t seem to have any major jolts coming, which is why they will be able to stay calm in their comfort zone.

Pisces – Those who sympathize with change
Natives of Pisces are very resilient when it comes to change. Equipped with resilience and imagination, they always manage to face every little novelty positively. This makes them dynamic and constantly evolving people. A real fortune gave that this second half of the year seems to have several novelties in store for them that despite a little initial effort will bring them closer to the realization of their dreams, making changes a means to get what they want.