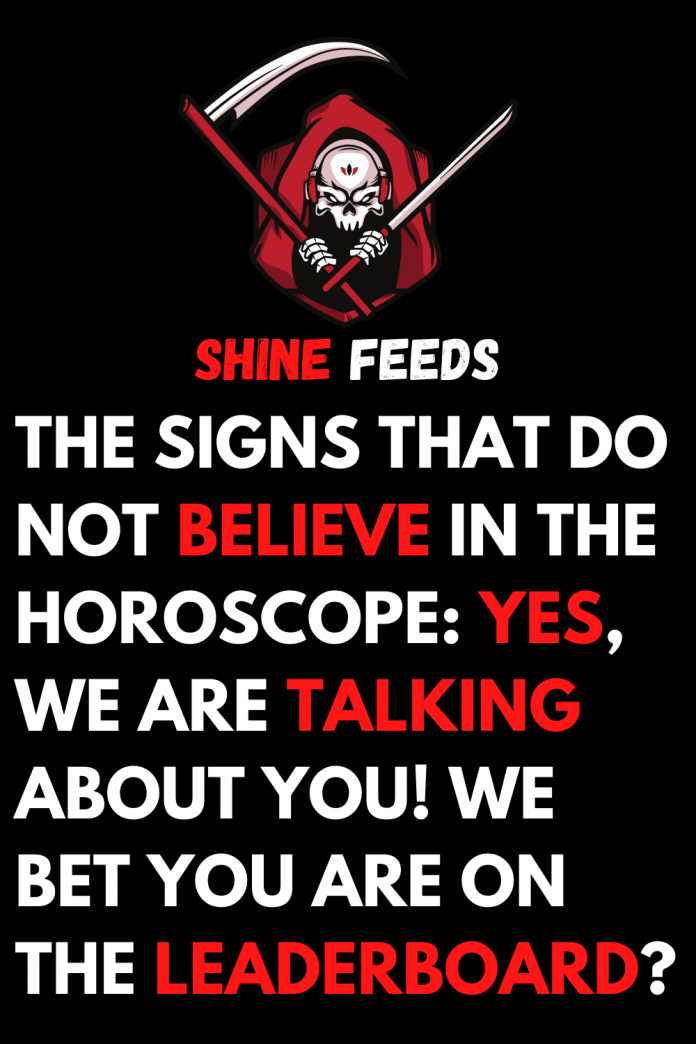 Today we have decided to reveal what all the zodiac signs that do not believe in the horoscope are. If you are there, it is proof that we are right!

We, horoscope lovers, know it: many people in the world absolutely do not believe in the influence of stars and planets. Well, the proof that the zodiac sign influences everyone is hidden in this ranking.

What are we talking about? Oh but just a list of all those zodiac signs that… well, they don’t believe in the zodiac!
Today we decided to ” unmask them “: hey, if you find yourself in the standings you have to agree with us, okay?

Okay, okay, we know: astrology and horoscopes may not always be written in stone or be absolute truths.
But what is absolute truth after all? ( Science, you will say, and you are also right. We can not argue ).

In an attempt to convince even the most resolute disbelievers of the horoscope, we have decided to draw up a truly special ranking.
That of the zodiac signs who absolutely do not believe in the horoscope!
If you don’t believe in the signs but you are in this ranking, you will have to give us some credit, don’t you think?

Let’s find out the first five positions together immediately and do not be offended if you believe in the horoscope and find yourself in the ranking. Your ” colleagues ” of the sign make you really bad publicity!

Divided as they are by their ever and constantly present duality, those born under the sign of Gemini will tell you that they absolutely do not believe in the horoscope.
Never they would put in reading the charts that concern them or the news of the day!

The Twins have a lot of rationales that, in the matter of the horoscope, almost always tends to prevail. Their way of dealing with it all is to downgrade the horoscope to nonsense, good only for stupid people. Too bad that the other party of the twins a little we believe in the horoscope: if not, why would you be here today?

A pragmatic, precise, and organized sign like Virgo should believe in the zodiac signs? His answer is obviously no even if we, thanks to the horoscope rankings, by now expected it. We know the Virgo well!

This is a sign that, even if he reads the horoscope when it happens to him, he absolutely does not believe it. He reads it more to be amazed if something is ” right ” rather than to find out what will happen in his day. After all, Virgo already knows: her entire life has already been fully organized!

Like? Would someone like to tell Leo what will happen in his day, how is his character, or, indeed, what should he do in life?
We are absolutely not joking. The lion does not believe in the horoscope mainly as a matter of principle.

There is nothing and no one who can rule the life or the days of Leo, much less the ” stupid ” stars!
The Leone would make of everything to prove that he does not believe in the horoscope: try not even to touch the subject with him. The very idea makes him really mad!

In his day marked by work commitments and by moments in which the Scorpio tries to improve himself, there is really no room for the opinion of the stars! The Scorpio, besides being one of the signs that will always be regarded with suspicion by others, does not believe in the horoscope especially since he believes to be the sole author of his destiny.

For him, there are no forces that can distract him from his goals: why read the horoscope when he already knows what his potential is?
Do not ask Scorpio if he believes in the horoscope: not only his answer is obvious but we are also sure that you would lose a little respect for yourself!

Taurus: first place in the ranking of signs that do not believe in the horoscope

Despite those born under the sign of Taurus we auditioned genuinely to like the horoscope, for them seems to be one of that guilty pleasure that will never be able to afford.
The reason is that the Taurus, while struggling with his all the same, just can not find it interesting … the view of the stars!

His rationality leads him to wonder, constantly, what is so intriguing about words written … well, by some stranger on a piece of paper.
Why does his sign do this or do this? Why are there so many people who believe it? And most importantly, why is his horoscope never perfectly accurate?

The Toro is one of those signs that are not really able to comprehend the fact that all (or most) worship the horoscope. For him, it is completely meaningless and leaves him stunned to hear his friends talking about it enthusiastically.
If you see him reading a horoscope don’t worry: he is just trying to blend in with others. In fact, we are almost sure that he is definitely worried … by the fact that we have unmasked him!