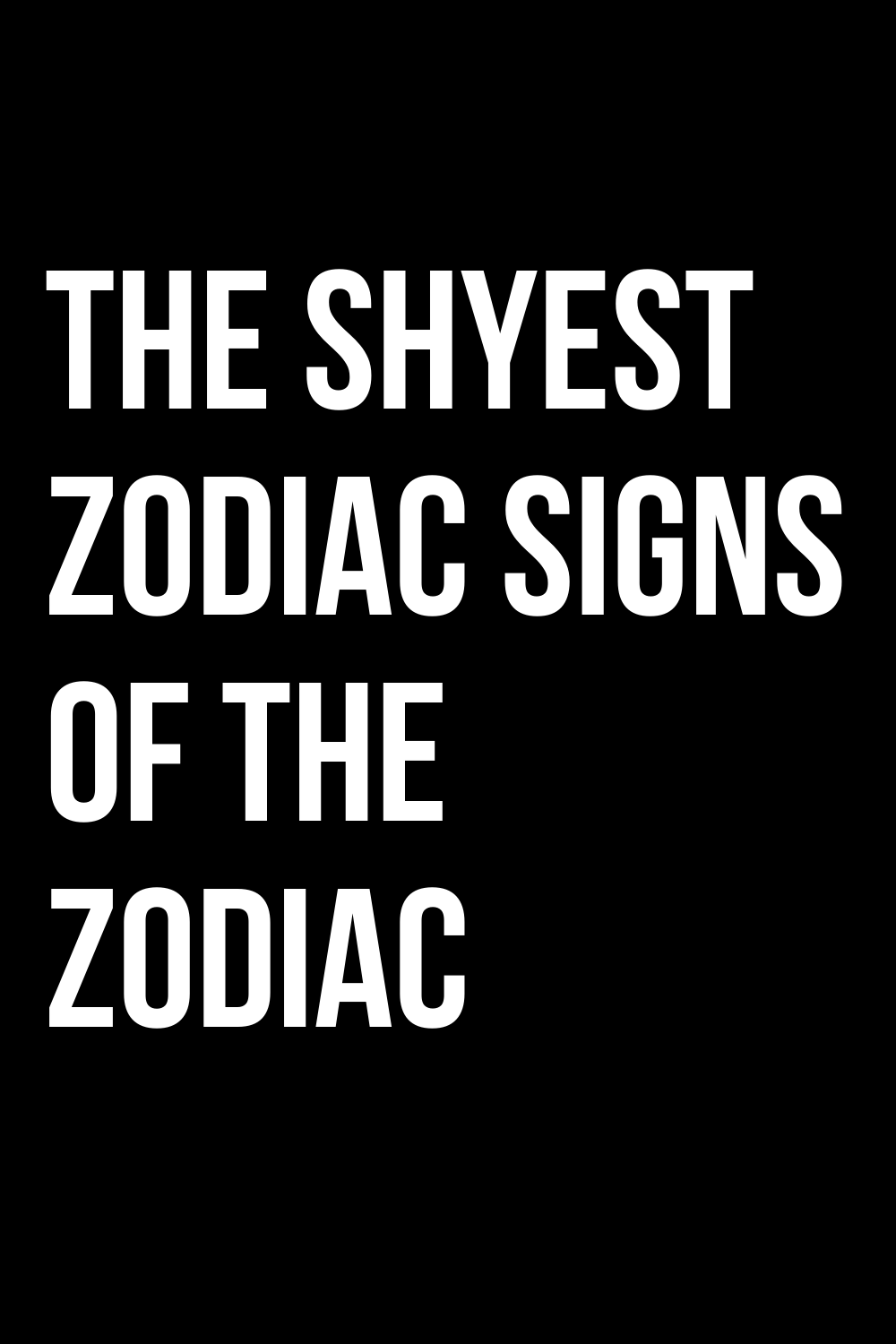 THE SHYEST ZODIAC SIGNS OF THE ZODIAC

Find out which zodiac signs tend to be shyer. The opinion of the stars.

Shyness is an aspect of the character that usually indicates a reserved person, who interacts little with others and who always fears the judgment of others. It is a way of being that in some people is barely mentioned and in others, it can be stronger to the point of becoming pathological.
As in many other aspects, shyness can also be partly influenced by the stars, as well as my experiences and how one has grown up.
For this reason today, after having seen which are the zodiac signs that get angry more easily and what are the strengths and weaknesses of each sign of the zodiac, we will find out which are the signs most likely to be shy and why.
Since it is a way of being linked to the way of feeling, the advice is to also check the profile of the ascendant of the signs that you intend to verify.

Horoscope: how shy are the various signs of the zodiac

Aries – Not shy at all
Those born under the sign of Aries are decidedly self-confident people, too much to be able to give in to shyness that is not in their way of being. The rare instances in which attitudes that appeal to this side of character may occur can therefore be traced back to negative experiences. Being a way of being distant from them, solving it will therefore be very simple and with a little effort, they will become the self-confident people they are meant to be.

Taurus – Moderately shy
More than shy, the natives of Taurus are very reserved and particularly calm people. This can make them appear shy in some ways and in rare cases the poor interaction they sometimes have with others risks pushing them towards a sort of insecurity from which they know how to get out quite easily. They have a great fortitude from them that distinguishes them and that allows them to fight for the things they care about, show themselves stubborn, and able to assert themselves when needed.

Gemini – Not shy at all
Gemini is not a shy person at all. From them, they have a particular skill in socializing and communicating with others. Party souls always know how to entertain others and can attract general attention if they want to. However, their attitude is often fluctuating due to their being very humorous and too often led to express how they feel without any filter.

Cancer – Quite shy
Those born under the sign of Cancer are people who tend to be shy. There is reserved, calm, and lovers of solitude greatly affect the way they appear to others who, many times, make themselves the idea of ​​people who are not very inclined to socialize. The truth is that sign natives love to surround themselves only with people they like and have no interest in interacting with others. This is combined with a form of insecurity that can sometimes transcend into insecurity. When this happens, the ability to abstract from this way of being is related to the period they live and the people they can lean on.

Leo – Anything But
Shy The natives of Leo are anything but shy people. Sure of themselves, like few others, they have such a desire to get noticed and to be the center of attention that shyness is just to be ruled out. To be honest they are so distant from it that they cannot even understand who has this problem, sometimes sinning superficiality towards them. Their way of attacking life, however, does not allow them to see beyond their interests, and even knowing it they tend not to worry at all about what others may think of them.

Virgo – Rarely Shy
Those born under the sign of Virgo are hard to pin down when it comes to shyness. Their character leads them to appear often distant and not very sociable with others. Most of the time, however, it is a simple desire not to share one’s life with people they consider strangers. In some cases, they may be shy due to negative experiences from which they struggle to free themselves. When this happens, the best thing to do would be to be able to share what you have experienced with others to have other points of view and to be able to look at the world with more serenity.

Libra – Timidly polite
Libra natives are not shy people, however, their always being calm and moderate, combined with the elegance of their ways of doing things often makes them seem shy. For this reason, when they are among the others and decide to have their say, they end up capturing the attention, generating amazement in those who had a completely different idea about their way of being. It is a detail of which they are often aware and that somehow amuses them, so much so that they push them to do nothing to change things.

Scorpio – Slightly shy
People born under the sign of Scorpio are very reserved people, so much so that at times they can appear shy. The aura of mystery that surrounds them tends to increase this image which is only partially true. In some cases, they may feel overwhelmed by the ways of doing things of arrogant or arrogant people, so much so that they choose to stay on the sidelines so as not to get confused with them and because they are aware that they have no meeting point. Their “shyness”, however, stops there because when they feel called into question or feel the need to have their say, they do not have any kind of problem.

Sagittarius – Never shy
Those born under the sign of Sagittarius are sociable people and great lovers of company. For this reason, it is very rare for them to indulge in shyness. Indeed, they often manage to help those who are shy to get out of their shell a little, and all thanks to their desire to chat and always embark on new adventures. Constantly getting involved in something that they like to do and that sets them apart, although somehow it makes them unapproachable at times because they are too caught up in themselves to notice others. But this is a side of their way of being that, whoever knows them, soon learns to accept.

Aquarius – Shy in their way
Those born under the sign of Aquarius are so reserved and unwilling to socialize that it can happen quite often that they appear shy. Theirs, however, is not a form of shyness dictated by insecurity or fear of the judgment of others, which among other things they do not care about at all. What tends to block them is the need to always appear in a certain way, so much so that when they are afraid of not appreciating any ways of doing, they prefer to stop and not act at all. The rest is linked more to appearance than to their way of being because it can happen that in order not to be insisted on by those who would like to take them out, they come to show themselves shy to create an alibi that allows them to act undisturbed.

Pisces – Very shy
Pisces is one of the shyest signs of the zodiac. This depends on their sensitivity and on caring too often for the feelings of others. In order not to harm others they prefer to keep quiet or avoid carrying out actions of which they are not sure and this happens quite often. Depending on the circumstances of their life they can find themselves trapped in a form of very strong shyness and from which it is difficult to get out. In these cases, external help could help them find the right balance between being attentive to others and free to act according to their way of being.