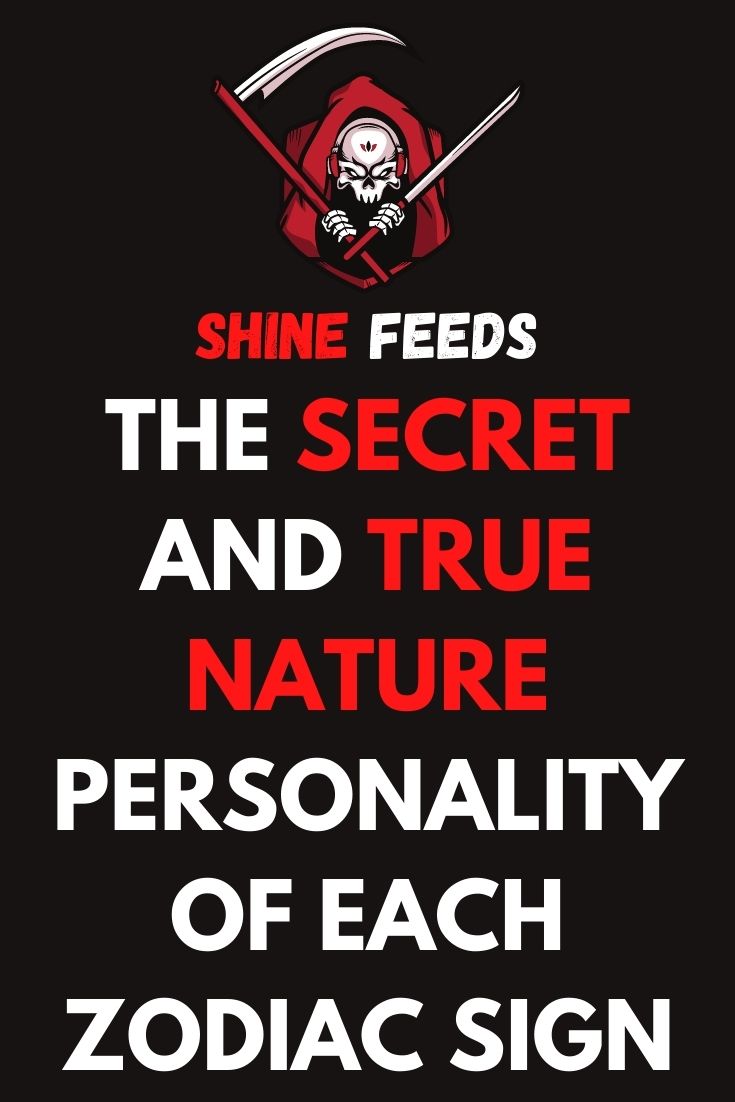 THE SECRET AND TRUE NATURE PERSONALITY OF EACH ZODIAC SIGN

Hidden traits can come out in many different ways; whether it’s with the BFF you’ve known for 10 years or with someone you’ve just met, these super-secret traits can shed a new light on yourself.

Is Aries really that aggressive and insensitive? Is Leo that brave? Is Capricorn so emotionally distant? I beg to disagree. These stereotypes are far from true and the more you learn and study astrology the more you will understand the lie! The Secrets of Zodiac Signs are about to be revealed.

You often get fiery energy when you first meet an Aries, but she can come off as much more aggressive than she actually is. While it’s true that she does have a bold personality, Aries has a second layer that isn’t prominent until you get to know her.

Hidden underneath that alpha personality is sensitivity and compassion.

What you actually see when Aries is trying to assert his/her dominance is an urgent call for validation and approval from you. They need reassurance because deep down in them lies a very romantic and sensitive nature.  They really CAN be a mighty knight or a dazzling princess once you” ve managed to boost their enthusiasm and confidence. They can even give their lives trying to defend the ones they love but they really really need your positive feedback. They need to be loved and appreciated!

Taurus is often perceived as either one of two things: UBER laid back or SUPER stubborn. While she might seem this way (and don’t get her wrong, she loves to relax), it isn’t always what’s really going on.

Even more, Taurus hates when she’s called lazy or hardheaded.

Taurus fights for what’s right, no questions asked. So, while it might look like she just wants a fight, what she really wants is justice. Deep down she’s determined, assured, and energetic; when there’s something she wants, she’ll be anything BUT lazy.

Do you know why they are so insanely stubborn? Do you know why they will -almost- never change their minds? It”s because they really feel so lonely inside. That”s probably due to some experiences during childhood when they felt that all they’ve got is themselves. Taurus is full of power because they never depend on anyone else. This also explains their selfish deeds but trust me. When they do say “I Love you” they really mean it, although it is hard to see it most of the time.

Gemini often gets a bad rap when it comes to her personality. Her sign stereotypes her into being the two-faced, moody type when it’s simply NOT true.

Yes, it’s often hard for her to express the emotions she wants (instead of the ones she thinks others want from her), but she’s anything but negative and unreliable.

Deep down, Gemini is one of the most levelheaded people you will meet. It might take some time to get her to trust you before opening up, but once she does, you’ll see she’s more than meets the eye.

When you just need a friend on your side, she always brings her calming nature with her to reassure her friends. And when you want a lover who appreciates the sensual, emotional side of sex, Gemini is your girl.
Ever moving, ever thinking, ever trying to do something different… this really can push others to their limits especially when it comes to long-term relationships. A typical Gemini seems disorientated – if not lost! This is because when they tried to be stable was the time they ended up being really hurt. Their unbearable mood swings date back to the time they thought they’ve figured out everything and unfortunately they haven”t had. They cannot forgive themselves for acting foolishly and this is a painful scar.

Cancer constantly gets pigeonholed as being an overly-emotional (and moody) person who tends to keep her guard up. For this sign, it can be hard for her to express herself in front of others without fear of being criticized.

Cancer is extremely intelligent and clever, and often uses her smarts to vibe off of others’ emotions. So, even if she would much rather be her true self, it’s sometimes easier to read the room instead of being totally comfortable.

That said, Cancer is MOST comfortable being herself when she’s alone or with very close friends, which means it might take a long time to see this hidden side of her.

Playing the Victim is what makes them so cute but also irritating sometimes. Their vast, deep ocean of emotions is hard to stay unnoticed but there”s a perfectly good reason for it. They play the “blame game” only to delay the harsh judgment from themselves. They are extremely clever yet they always try to avoid “coming clean” because they are extremely hard with their decisions and choices and they got such a great memory that doesn’t help the healing process.

On the surface, Leo can seem like a confident, yet guarded person to those who don’t know her. In reality, this is very untrue.

Her dramatic nature can also make her look like she’s only out for herself, which can mess with people’s perception of her.

If you’re not close with Leo, then this can all seem like fair assessments. Instead, Leo is actually a very sensitive person who loves using her generous nature for good.

She is also extremely loyal to her closest friends, which allows her to get in touch with her empathetic side.

The first time you meet a Leo you may feel dazzled by their noble appearance, their confident way of walking and the way they establish their dominant presence. Smoke and mirrors. A typical Leo is really sensitive and trying to hide the depth of their emotions. They secretly blame themselves when something goes wrong although they might never say it out loud. They really want to help as their truly generous nature pushes them to, yet most of the time they feel that they have failed you and most importantly themselves. This explains the typical “diva” attitude.

Virgo gets stereotyped as being the quiet, sometimes judgemental, analytical sign. And even more often, people assume that this means they have Virgo all figured out and won’t take the time to get to know the real her.

Solid, stable and practical they always tend to analyze what is going on, judging and criticizing all. The truth is that they feel bound to the misery of the world trying to fix whatever they can. Deep down they don”t really want to become more successful in whatever they do but they really want to break free and live an adventurous life. They are just too scared to do it as they failed to feel independent. A true Virgo wants to spread his/her wings and fly in the blue sky.

On the outside, Libra looks more like a friendly, passive person. Some might say she’s superficial because she doesn’t like getting into the middle of arguments, but that’s not always the case.

Just because Libra doesn’t always say something doesn’t mean she isn’t seeing everything. Deep down, Libra is a thoughtful, introspective person who takes it all in before making a move.

She’s also a very critical person (of herself and others), which means she’s devoted to always trying to do what’s right; not passive AT ALL.

Scorpio often gets painted in a bad light, with people focusing more on her perceived aggressiveness and zeal, rather than what’s really underneath it all.

While it’s true that she is a very passionate, strong person, she doesn’t express these traits the way everyone thinks she does.

What Scorpio hides from the world is a romantic and gentle side. She tries to fight for what’s important for her, but when she isn’t able to shut that off, that’s when people start making assumptions.

She also has an idealistic, dreamy outlook on life, which makes her much softer around the edges than she seems.

To anyone who has just met Sagittarius, she’s social, charming, and sometimes flirty girl. She loves to have fun and will always find a way to keep the party going.

This isn’t entirely untrue, but Sagittarius isn’t a shallow party girl like everyone thinks.

Many people like Sagittarius’ carefree nature, so while she’s actually more serious than she seems, it’s sometimes easier to just hide that side of her and be the person others like best. In reality, Sagittarius is profound and analytical, always thinking and always eager to learn.

Capricorn Zodiac Sign Astrology Hidden Traits
Capricorn can be reserved and serious most of the time (and she knows it), but that’s only because it’s not always easy for her to open up to strangers.

Capricorn’s biggest (and most surprising) hidden traits are that she’s very inspired and optimistic.

It might not look like that to the naked eye, but Capricorn is truly a positive girl. When people say she’s reserved, it usually comes from her philosophical, wise nature; she might be a deep thinker, but she also knows how to have fun.

There’s a lot going on under the surface when it comes to Aquarius, but what that is might surprise people. She’s often portrayed as eccentric and cold with a tough outer shell, but Aquarius is far from that.

Aquarius sometimes struggles to love herself, which can project onto others as unfeeling or emotionless, when really, she doesn’t always feel comfortable letting people see her real self.

Aquarius is a reliable person who will always stand up for her friends (and herself), even when it’s hard, and stays grounded even when things don’t go as planned.

She’s also a die-hard realist, which can easily translate into pessimism instead of what it really is: intelligence.

Pisces is one of those signs that is ALWAYS underestimated, no matter what the situation is. Once people convince themselves that Pisces is nothing more than a dreamy, romantic, emotional person, they don’t really care what her real personality is.

Pisces can be all of these things, but there’s more than meets the eye with her. She’s not as connected to others as she seems; don’t think that means she doesn’t like being helpful and kind, though.

She enjoys doing her own thing more than anything and is WAY more intelligent than people give her credit for. Even though she seems dreamy, she’s actually incredibly innovative and thoughtful.