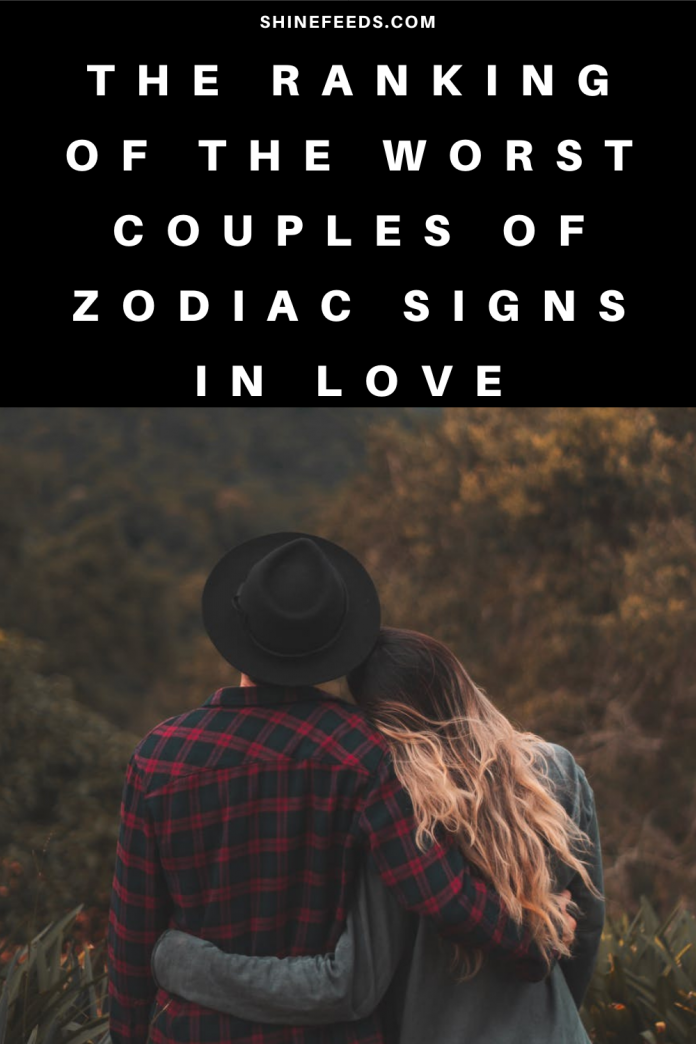 Do you want to know the ranking of the worst couples of zodiac signs in love? Here are the six couples that shouldn’t be together (and why too)!

Hey, you can’t say we didn’t warn you.
Yes, it’s true, there is a ranking drawn up by the horoscope that can tell us which are the zodiac signs that should not be together.
If you and your partner are one of these couples, you absolutely cannot blame us: the stars have spoken for us!

We immediately find out what these six pairs are, which we also ranked from best to worst.
(Although they are all couples who shouldn’t be together ). Ready to find out the truth?

The worst couples of zodiac signs in love: here is the ranking of all the signs of the horoscope

You know those couples who, when you get to know them a little bit better, give you a strong feeling of… er, problems?
We all had a friend or a girlfriend engaged with someone who was not the partner perfect for them.
And, let’s face it, we also happened to be with someone who wasn’t exactly a great match!

The reason is, in all likelihood, also hidden in our zodiac signs.
There are, in fact, couples that the zodiac doesn’t approve of at all: aren’t you curious to know if you and your boyfriend are just one of them?

Let’s find out together today’s ranking of the six worst couples in love according to the horoscope.
We hope you are not there!

Please don’t try to make love at first sight between Aries and Cancer! Those born under these two signs although they may be friends, cannot be engaged.
They would end up hating each other after a very short time!

The Aries are very active people who want to make lots of experiences and socialize as much as possible. Cancer, however, loves spending the nights wrapped in her robe stacks and standing as far away as possible from the other.
They are truly a failed match!

Those born under the sign of Taurus and Leo form another pair very little exciting.
These are two zodiac signs that could not help but enter into competition immediately, challenging each other in every area.

Even more, Taurus and Leo would not be able to stimulate themselves to each other but they would do everything to “win”, reaching even to try to excel on the partners.
Needless to say, this is a real recipe for disaster, right?

Scorpio and Libra are in fourth place in our ranking but, perhaps, they deserve a higher position.
This is truly a couple … destined to burst!

Concentrated and performing one (the Scorpio ) and distracted and envious the other (the Libra ), these two signs are likely to make war.
The Scorpio does not have time to be in analyzing the feelings of others, especially those who try in every way to hide them, and the balance would end up becoming envious and jealous!

One is cold and disinterested in others, unable to see them as necessary elements of life. The other, on the other hand, is all aimed at the relationship with other people, always trying to put them at ease. We have to tell you which of the two is Virgo and which of the two is Aquarius?

Those born under these two signs are truly incompatible. The Virgin hates the way to do the Aquarium and Aquarium are insensitive and intolerable the Virgin. Mismatched couple: they are trouble when they get together!

In second place in our ranking today we must report the couples formed by Gemini and Capricorn.
There is (almost) no pair of zodiac signs worse than theirs!

The Gemini, extremely emotional but unable to be assertive, and the Capricorns, very cold and real ” walls ” of granite, form one of the worst couples in the zodiac.
As much as opposites attract, trust us: a couple so unable to communicate has (almost) never seen each other!

Pisces and Sagittarius: first place in the ranking of the worst pairs of zodiac signs

Oh no, the two most ” candid ” signs of the zodiac would be a terrifying couple. Trust us! The Pisces and Sagittarius do not have anything in common and end up arguing every second.