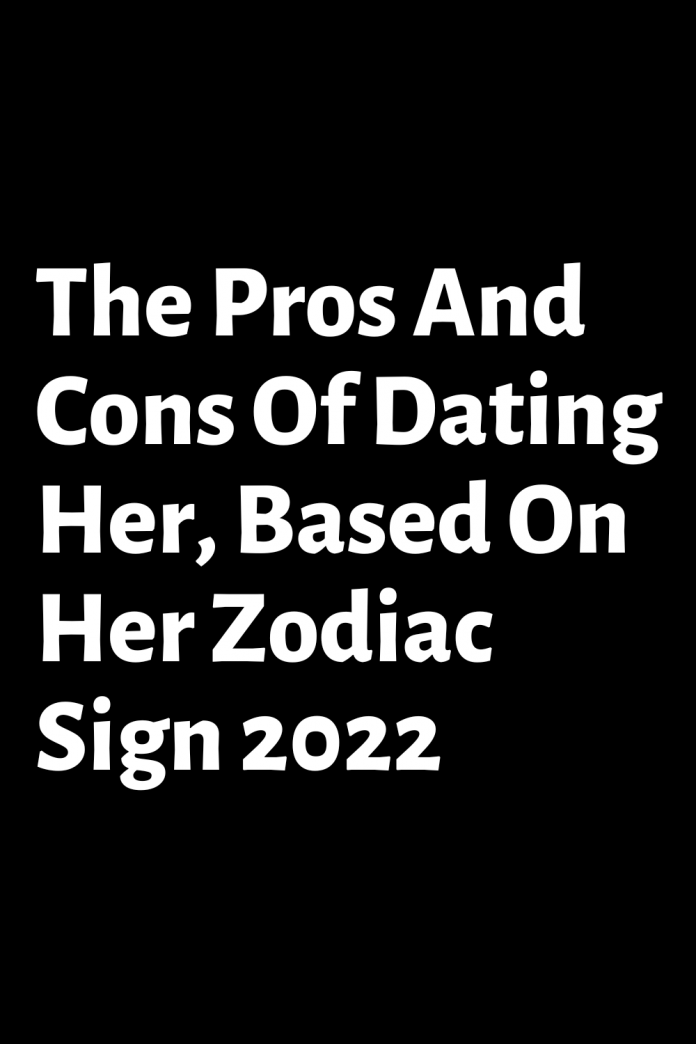 Pros: Energetic and creative Aries will help you choose. If you have troubles deciding things, then she’s the right girl for you.

She is stubborn that way and she likes to boss around, but usually, she has a very good reason to act like that.

Cons: It takes a long time for her to open up to someone. She keeps her feelings to herself because she’s cautious. Also, never keep an Aries woman waiting.

She hates that. If you said you’ll meet at 8, then you better be there at 8 sharp. As she hates being kept waiting, she is also impatient, so waiting in lines is not her thing.

Pros: She will be by your side no matter what. She will nurture and take care of you because she takes relationships as seriously as she takes her professional life.

It’s truly a pleasure to have such a hard working woman by your side. She will inspire you to be better and to dream bigger, and at the same time, she will put tremendous effort into making your relationship work.

Cons: If you want to confront her, you better have solid proof because her biggest fault is she’s stubborn as hell. If she thinks she’s right, almost no one will be able to convince her otherwise.

She won’t disrespect you. She will listen to what you have to say, but it’s unlikely you’ll manage to change her opinion.

Pros: A Gemini woman is always up for an adventure. Her energy levels are sky high.

Whatever you want to do, she will follow. If you want to skydive or climb a mountain, she’ll be right there.

Her ability to blend in with pretty much everyone is amazing.

Cons: There are two things about a Gemini woman that might upset the person dating her. She is a know-it-all, and she can’t be tied to one place for too long.

Her need to go from one place to another and hang out with different people all the time can be a potential commitment issue. If you want to get attached to a Gemini woman, beware of that.

Also her ‘I know everything’ attitude can easily annoy you.

Pros: A Cancer woman will always have your back. She is loyal to a fault, and you should never ever doubt her.

If she has to turn the world upside down for you, she’ll do it. It’s in her nature. She is a born caretaker and nurturer.

Cons: She is too emotional and very moody. The problem is you’ll never know what she exactly thinks and how she feels.

One moment she will be the best friend and the kindest person you’ve ever met, and the next one she will lock herself in her room, and you won’t have any idea why.

Pros: People think that Leos are egoistic and selfish, but in fact, they are not. When in a relationship, a Leo woman will shower you with attention.

She will tend to your every need. All Leo women act like that when they really like someone.

As she loves the attention herself, she loves to give it to the person she cares about.

Cons: One of the most annoying things about a Leo woman is her pride. She won’t admit she made a mistake, and she’ll do anything to prevent you from winning in a fight, even if she was the one who was wrong.

She has problems with recognizing she has hurt you, and naturally, she doesn’t say ‘I’m sorry’ that often.

Pros: She is organized and caring. She will take care of you, and you’ll never have problems with a woman like this.

She’ll carefully plan your time together, and in one word, it will be perfect. Aside from the organization, she is a born nurturer and genuinely a loving person.

Cons: Virgos have an endless fear of not being good enough. Women like her lack confidence because they think they can always do better, so they are never quite happy about themselves.

She worries all the time about things that are beyond her control, things she can’t affect.

Pros: Libra women bring balance to your life. If you’re not that confident, she will show up with tons of confidence—enough for the both of you.

Also, she is a great kisser and a pretty good listener.

Cons: Libra women hate confrontation, and they avoid it at all costs which sometimes may look as if they don’t know how to defend themselves. In addition to this, it takes them forever to make a decision.

First, they will take in consideration all possible sides to the story, and then they are going to wrap their minds around the matter, trying to make a fair decision which, as I’ve already said, takes forever.

Pro: She is honest and passionate. She will never stay quiet if she has something to say, and sometimes her honesty can be very brutal.

Keep in mind that she would never intentionally hurt you. Everything she says is because she cares about you. Her love for you will never stop burning.

Even if she’s not with you, she’ll think of you.

Cons: She is leading an active life, and she isn’t planning on stopping for anyone. So, if you wish to date a Scorpio woman, be prepared to always be on the go.

Pro: If you’ve never experienced a life of adventure, be prepared for that. Sags don’t like to lead passive lives, and dating a Sag is everything but boring.

She will teach you how to enjoy life, and she will take you on adventures you’ve never dreamt of. Get ready for excitement and adrenaline rushes.

Cons: Her biggest fear is being stuck in a boring relationship because her biggest ‘fault’ is constantly moving around. She doesn’t like to be tied down to one place, and she despises routine.

That’s why it’s hard to get her to commit.

Pros: Capricorn women are extremely compassionate, loyal, and trustworthy. They will be your anchor if you float to your dream land.

They will get you down to earth, face-to-face with your problems, and in the end, they will help you solve them. A woman like this has no problem in taking on leadership and making hard decisions.

Cons: She trusts herself the most, and sometimes she can appear as too controlling. This only happens when she has a problem at hand, and she wants to solve it as soon as possible.

Then, she doesn’t take advice because she has already planned it all in her head.

Pros: At first sight, an Aquarius woman might appear like she’s not in touch with reality. You may even think that she’s not listening when you speak, but you’re in for a surprise.

She knows so much about you that every present she picks for you is like you picked it yourself. She is in touch with her feelings, but she also cares about yours more than you think.

Cons: The biggest issue all Aquarian people have is that they are closed off. They tend to retreat into themselves and build huge walls around to prevent anyone from coming in.

They spend a lot of time alone although they hate it. It will take a lot of time to get an Aquarius woman to show you the way to her heart.

Pros: A Pisces woman is a hopeless romantic. When she loves, she loves with all of her heart.

If you need care and attention, she’ll stop at nothing to give it to you. Although, don’t be like some men—never take her for granted.

Just because she’ll always be there for you, doesn’t mean she’ll put up with everything you do. Never cross her because she won’t forgive you.

Cons: She is very in touch with her feelings and yours, too. When you’re not feeling okay, she isn’t either.

This is a bad thing because she is in danger of emotionally draining herself which leads her to close off and retreat.