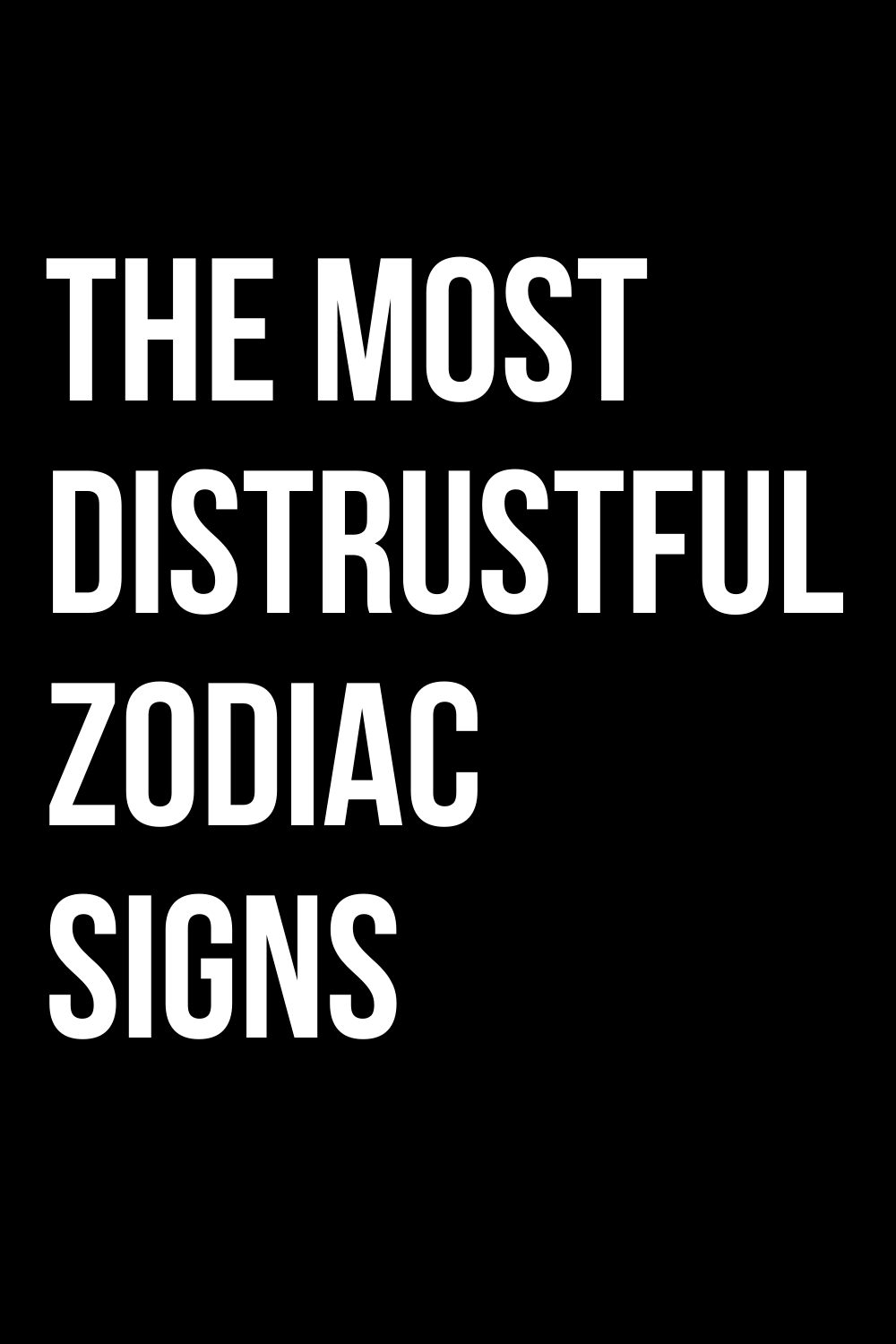 THE MOST DISTRUSTFUL ZODIAC SIGNS

Find out which are the zodiac signs that tend to never trust anyone and which ones instead trust too much.

Interpersonal relationships are the most difficult thing in the world. As wonderful as it is to find like-minded people with whom to get along, the risk of running into disappointments, especially when you trust people you have never met before, is always around the corner. For this reason, over the years, more and more people end up withdrawing into themselves, becoming wary of others. If on the one hand not trusting immediately can represent a good defense weapon, on the other hand you run the risk of not being able to establish important relationships anymore, ending up being alone.
Since the way in which you trust or do not trust others may also depend on the influence of the stars, today after seeinghow the zodiac signs react in front of a betrayal and how the signs of the zodiac act when they are jealous , we will find out which are the most distrustful zodiac signs of all and which ones they trust anyone. This will make it easier for you to understand if there is something to correct or if you are proceeding correctly. Since this is an aspect that has to do with the way of feeling, the advice is to also check the profile of the ascendant in order to have a more precise picture.

Horoscope: Which are the most distrustful zodiac signs and which are not at all

Aries – Quite distrustful
Those born under the sign of Aries tend to never completely trust those around them, perhaps because if necessary they are the first to lie or behave incorrectly. Regardless of the reasons, they do not like to rely completely on others and tend to always expect the worst from people, which is why when it happens there are no big problems. In relationships with others, therefore, even if they are sociable and always ready to make new acquaintances, they always remain on their own, avoiding opening up completely and studying the reactions of those in front of them in order to grasp any attitudes capable of reporting details to the which ones to pay attention to.

Taurus – Wary, especially with those who do not know in depth
The natives of Taurus are people who care very much about the very concept of trust. For them, being able to trust others is very important but, aware that not everyone is ready to behave loyally, they tend to only trust people they consider intimate. These are usually very special relatives and friends. To all the others they prefer to give the benefit of the doubt, limiting themselves to an attitude that is sometimes a bit detached when they perceive something that sounds strange to them. We can therefore say of them that they are wary but that they have a preferential channel for the people they really care about.

Gemini – More likely to trust
Those born under the sign of Gemini are friendly and very sociable people. For them interacting with others is something special and this leads them to trust more or less easily. Sometimes it happens to them to rely on instinct but not always allow themselves to be guided correctly by going more than anything else where their heart takes them. This attitude risks making them suffer, especially when they tend to get attached. Fortunately, they quickly realize that they are wrong and when this happens their attitude changes suddenly along with the feeling of friendship. This means that they remain on their side for a while even if in the end the desire to return to trust is always around the corner. Luckily they have a hard skin and that despite disappointments they are always able to maintain their innate and adorable enthusiasm.

Cancer – Wary
The natives of Cancer, although apparently they are people so sensitive as to come to trust everyone, in reality they tend to be more wary than many other signs of the zodiac. This is due to the fear of being disappointed and being disappointed. Unfortunately from this point of view, reading them is extremely easy, since when they trust someone they are extremely kind, while showing themselves detached when they do not feel immediate sympathy. A way of doing that can still put them at risk, allowing those who want to cheat them to be able to outwit them in some way. Greater control of their emotions would undoubtedly be advisable.

Leo – Wary to the right point
Those born under the sign of Leo love the idea of ​​being able to trust others but because of their practical sense they tend to keep their desire as something to fantasize about, behaving in a completely different way when they have a dealing with others. If with friends they tend to always give a chance, in the professional field, while always showing themselves to be kind and accommodating, they are rather prudent, relying on others only after having received several tests from them. This allows him to never lose the clarity necessary to relate to others in the correct way, studying them just enough to anticipate any negative intentions.

Virgo – Very wary
Virgo natives are among the most wary of the zodiac. In part, their distrust depends on the negativity with which they see things, on the other by the extreme rationality that they always apply to everything and which in everyday life leads them more naturally not to place their trust on the people who they do not know. On the contrary, they always hope to be able to rely on those they love, although they cannot help but always observe them with a critical eye, not so much to unmask them but for fear of discovering that something is wrong. Being disappointed with loved ones is in fact one of the things they fear the most.

Libra – Fairly suspicious
Those born under the sign of Libra love to have peaceful relationships with others and for this reason they always hope to be able to trust others. Nonetheless, they have enough practical sense to understand that one cannot rely on others on hopes alone and for this reason they always act in moderation, without revealing too much about themselves and keeping certain things secret. Only time will be able to give him the right trust to place on a few selected people, whom they will trust regardless and without reservations, albeit with a pinch of foresight. Because in the end, their way of being leads them to believe that they can only trust themselves 100%.

Scorpio – Sufficiently Wary
The natives of Scorpio have a strange relationship with trust. On the one hand they would like to be able to trust others, on the other hand, for fear of being disappointed, they end up being extremely distrustful. However, their search for someone they can trust is practically constant and when they think they have found him and, after having made him pass certain tests, they tend to reveal themselves completely. For this reason, in case of rip-offs, in addition to being particularly disappointed, they feel such anger that they come to meditate revenge. Negative experiences, among other things, forge them not a little and with each disappointment they therefore tend to become more and more suspicious and less open towards others.

Sagittarius – Very wary
Even if it doesn’t seem like it, those born under the sign of Sagittarius are not at all ready to trust the first one that happens. While they are willing to offer their friendship and confide certain things, they tend to never say anything compromising and all because they never know what awaits them. On the other hand, they do not like to be treated with the same currency and when this happens they end up taking it to the point of deciding that they cannot trust anyone. Theirs is an attitude that depends on their always feeling at the center of the world but it is also something they do not intend to change, considering it a sort of weapon to live better even in difficult times.

Capricorn – Variably
wary Capricorn natives aren’t exactly wary. They prefer to study the people around them and behave differently based on the impressions they have. If at work they try to show all their distrust, when it comes to interpersonal relationships they tend to trust to the point of not seeing situations that could harm them. When they bump into it, it is therefore likely that the first reaction is highly negative and that due to suffering they close for a certain period of time. Although they are inclined to learn from the lessons they have received, after a while they will still return to their strange system and this is because more than anything else they are extremely stubborn people.

Aquarius – Extremely wary
It is really difficult for those born under the sign of Aquarius to come to trust anyone. For them the only person worthy of such a risk is the one they see every morning in front of the mirror. With others they have different attitudes that vary according to the type of relationship and based on the feeling they already have from the first meeting. In relationships they tend to be a little more open, trying to give them a little trust but never exceeding certain limits that are indispensable for them to feel safe. This means that most of the relationships they have are superficial, triggering a situation that is virtually impossible to change.

Pisces – Almost not at all distrustful
The natives of Pisces love to believe in others because, by almost always acting in good faith, they really struggle to identify with those who behave in a deliberately wrong way. Obviously they are not stupid people and, indeed, precisely because of their sensitivity they tend to understand immediately when someone is betraying their trust, even being hurt. Nonetheless, they know that they are strong enough to overcome any sorrows and prefer to continue to trust, in part so as not to pour out the wrongs committed by completely different people on others and above all because they are eager for a better world and always ready to take some steps to obtain it.