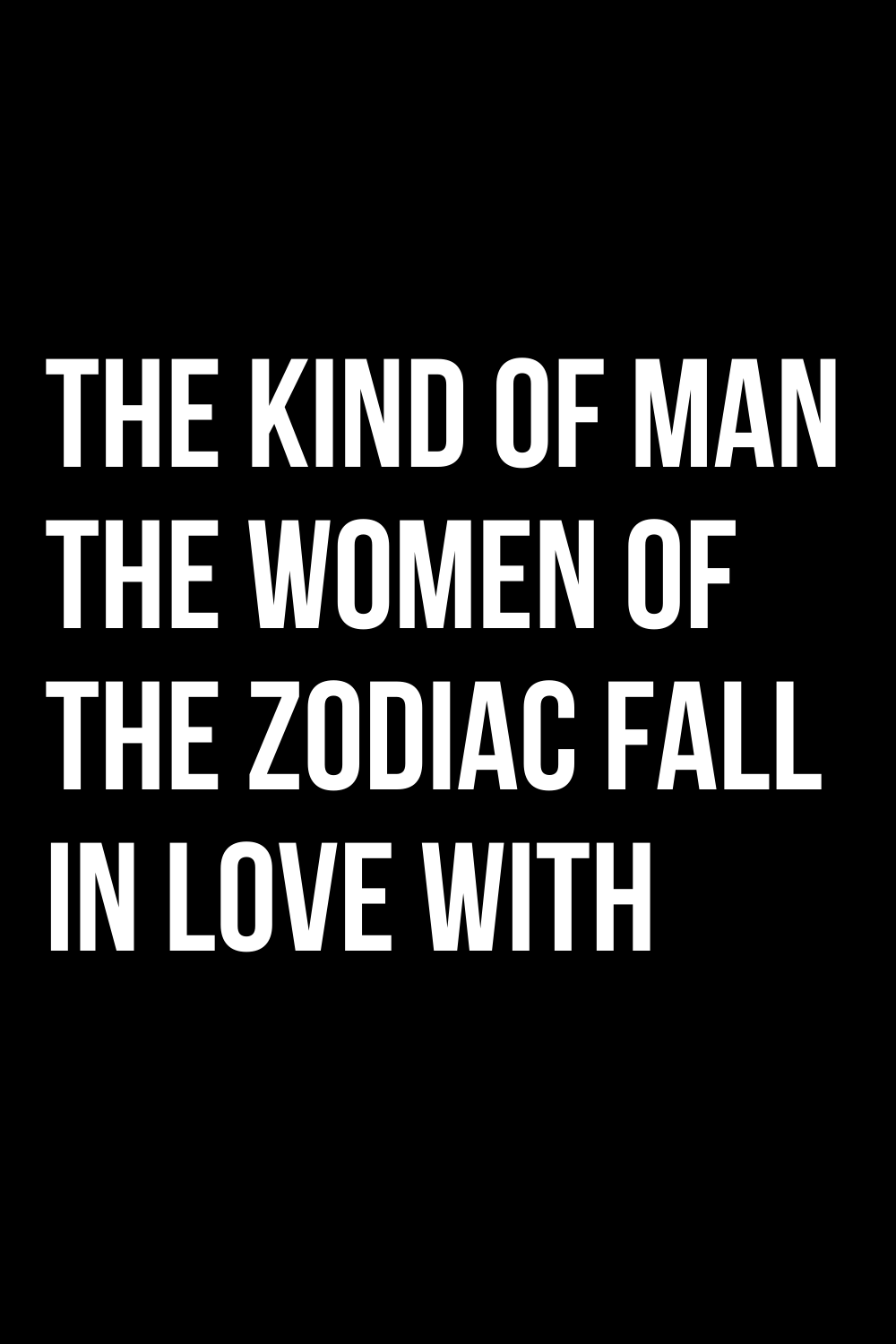 Find out which type of man you fall in love with most easily based on your zodiac sign.

Who hasn’t happened at least once to find themselves reflecting on the fact that they have a weakness for men who share certain characteristics? Like it or not, whether by character, life needs, or simple influence of the stars, each of us is attracted to a type of man and this applies to both strengths and weaknesses. Although with every story gone wrong you find yourself swearing not to get involved with a certain type of person anymore, sooner or later the heart is beating for someone who, more often than not, has characteristics similar to the person with whom. you have already been. Of course, this does not necessarily apply to all but those who have already noticed such a thing might find it interesting to understand what these characteristics actually are and why they always end up being attractive. So today, after seeing what the various zodiac signs expect from friends and what you should change into to find love, we will find out what kind of person you fall in love with more easily. When dealing with feelings, it is also better to check the profile of your ascendant, to have a clearer idea of ​​the situation.

Horoscope: this is what the kind of person you fall in love with most easily is like

Aries – Man who tends to be superficial
Those born under the sign of Aries tend to lose their minds for people who can make them laugh and make them feel special at the same time. Most of the time, these are good-looking men who love themselves more than others and who after some acquaintance can be even superficial.
Of course, it is not a rule that applies to everyone but it is what you risk most encountering when you let yourself be led by the initial attraction. A good way to change your ride? Try to get to know a person thoroughly before saying you are in love with him. Infatuation often comes into play due to some characteristics but it can turn out to be a flash in the pan in front of the complete picture.

Taurus – The mammon man
The natives of Taurus love the idea of ​​being able to build a family and be able to count on a person who is romantic but at the same time serious and with his head on his shoulders. Often and willingly, therefore, they tend to approach men who know how to show themselves full of attention and can understand the female mentality more than anyone else. Among them, the figure of the man so-called mammon is often hidden. A man who knows the female universe well because he has a very present mother (and sometimes even sisters) at his side. This is not necessarily a defect if once love takes over, the relationships within the family are ready to change. In some cases, however, the risk is that of having to compromise with more than one female figure.

Gemini – The unreliable man
Those born under the sign of Gemini are often attracted to men who can surprise them in every respect. Behind these profiles, however, there is often hidden that of people who love to live for the day and who over time can therefore show themselves superficial or unreliable. This is a problem for the natives of the sign because if on the one hand, they need someone able to entertain and amuse them, on the other they need a person who is also able to be always present, especially in moments when they feel depressed. or more fragile than normal. The solution to the problem has two ways: the first is to get to know someone better before committing and the second is to not focus only on the fun side but also on other important characteristics.

Cancer – The man too condescending
Cancer natives are people who tend to be attracted to men who know how to make them feel pampered and always the center of attention. Given their temper and the desire to have always won over everything, the risk they run is to always end up together with people who, in the long run, show little character or too much condescension towards them. While this is exactly what they ask for, a similar character can make them lack other important characteristics, leading them to tire quickly or feel the need to change. The solution? Learning to accept even no and the possibility of being contradicted by someone without starting to ignore them. Sometimes love can also hide behind people other than those you think you want.

Leo – The always cheerful man
Those born under the sign of Leo are always full of life and charged with an energy out of the ordinary. For this reason, they almost always feel attracted to men who, like them, demonstrate that they know how to enjoy life and who are therefore always cheerful and ready to embrace every situation with the right enthusiasm. There is usually rarely a downside to this. The important thing is to make sure in time that the person you choose to attend does not have the same obsessions of being a protagonist because sharing the throne of attention can be tiring and frustrating for both of you. Better to bet on someone full of life but who knows when to step aside. Unless you want to try the experience of being the sidekick for once instead of the protagonist, of course.

Virgo – The eccentric man
Virgo natives are square and very rational people. For this reason, they feel attracted to strong personalities who know how to prove themselves halfway between the serious person and the imaginative one. In fact, in their life, they feel the need for a breath of different energies but at the same time, they are aware of needing stable points that only a serious and staid person can guarantee them. Having said that, at least initially, they always end up feeling attracted to people who are different from others, who always show that they know what they want. If they are lucky, these people also have a more stable side, able to make them complement their way of being. Otherwise, however, the difficulty could arise from being without reference points.

Libra – The self-confident man
Those born under the sign of Libra love people who know how to be self-confident and who demonstrate that they always know how to make the right decisions without getting too upset. In their eyes, it is an elegant way of doing things that makes them particularly attractive. This trait, however, can sometimes be combined with being presumptuous and too motivated to assert one’s position. Attitudes that, the natives of the sign, just do not tolerate enough lead them to choose to easily end a relationship at the first example on their part. As always, the best advice is to try to get to know people well, trying to immediately catch any signs of humility. In this way, it will be easier to be able to hope to find the right person to work alongside.

Scorpio – The overly sophisticated man
Scorpio women love a complicated man who in their eyes is at least a little mysterious and who shows himself to be both easy-going and captivating with his ways. Although they tend to be enchanted by those who know how to always show themselves above situations, once together, they easily notice any defects, remaining strongly disappointed. For them, it is therefore important that the substance is also apparently combined and that everything is married to a patient character and able to demonstrate feelings without ever being cloying. This is a very difficult type of man to find, which the natives of the sign know all too well.

Sagittarius – The man who shows off
Those born under the sign of Sagittarius love men who know how to get noticed. They find them exuberant and fun and find it enjoyable to spend time with them. For this reason, they end up falling in love with those who more than anything else love to show off. In the long run, however, this type of attitude gives them different things to say, leading them to tire easily. In fact, in the absence of new stimuli, even the things he likes best end up appearing boring to him. To make the story last or that things evolve differently from relationships that have gone wrong, the best thing for them is therefore to find someone who knows how to reinvent themselves every day to surprise them without ever getting tired.

Capricorn – The strong man but often lacking in manners
Capricorn women love to be surrounded by people with strong character and can assert themselves. This aspect is evident in any type of relationship, even more so in couple relationships. For them, a man who always knows what he wants and how to get it is the best, so much so that they get lost, at least for the first time. In the long run, if they do not choose to learn more about it, the risk is that of finding themselves alongside men who are not very educated or unable to express their opinions without appearing arrogant. And if he even tends to like this at first, after a while it becomes an increasingly difficult burden to bear. For this reason, it is always good to first ascertain how the person who begins to like himself handles himself among others.

Aquarius – The Man with Peter Pan Syndrome
The natives of Aquarius love men who, like them, know how to stay over the top. Unfortunately, they tend to almost always feel attracted to funny people but at the same time unable to provide the security they also need. This can cause the relationship to fail before its time. Since the type of man they can perceive as an ideal is only the one who knows how to show himself different from the others, the only alternative is to probe the ground thoroughly during the knowledge phase, to understand if there are at least the basics. of a maturity without which building a future together can be really difficult.

Pisces – Man different from others
If there is one thing that attracts the natives of Pisces when it comes to men it is their way of showing themselves different from others. Attracted as never before by everything that does not fit into normality, they feel attracted to people who must be known thoroughly before discovering themselves completely. This certainly involves an electrifying initial phase but which over time can lead to many disappointments. Accustomed as they are to fantasizing the natives of the significant risk creating an image that is often different from the real one. For this reason, they must talk a lot with the person who interests them to be able to frame them better, thus avoiding unnecessary waste of time.