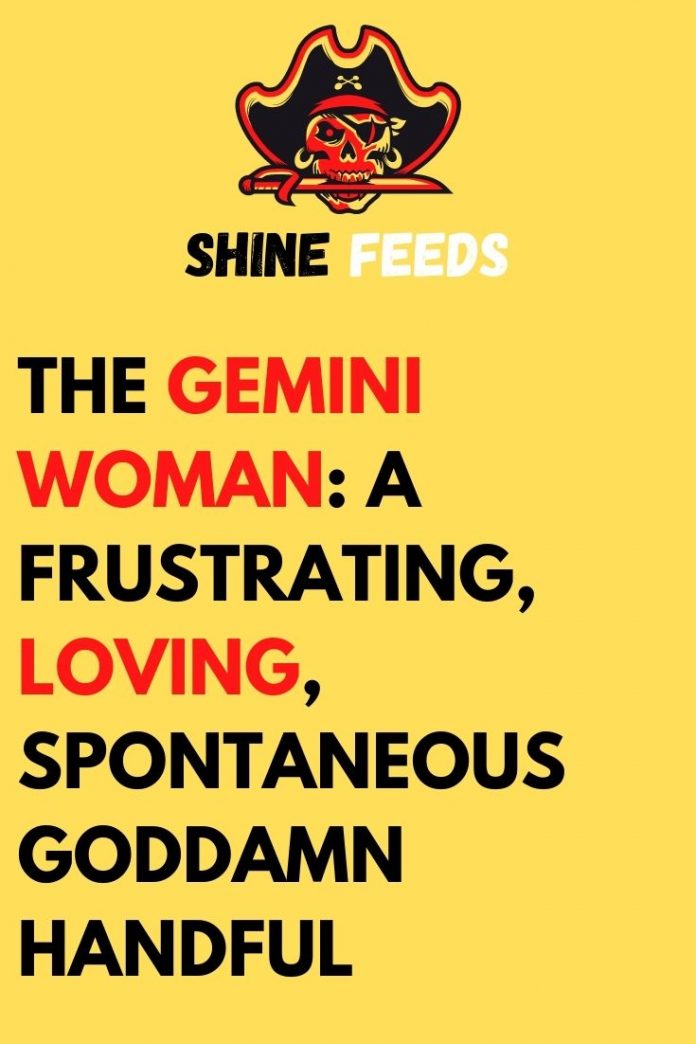 You’ll know the Gemini woman in the room because she’s the one floating from group to group, inserting herself into conversations that don’t involve her and moving on elsewhere the moment the topic ceases to interest her. That’s what she needs: provocation, entertainment, challenge. She’ll ask the questions nobody else dare, in a way that nobody else can. Then, as quickly as she devours your answers and attention she’ll walk away again too. And that’s not because you stopped giving the good stuff – she simply, and quickly, changed her mind on the exact type of good stuff she wants.

She’s fickle like that. Not that she self-identifies that way. She’s a flake and occasionally a little fake, but she calls it endlessly curious and easy-to-adapt. All counts are true.

You won’t know which version of her you’re going to get, at any given moment. Your Gemini woman makes no apologies for having more than one self. She lives seasonally – one moment it’s summer and she’s the singing, dancing grasshopper, luring you in to the romance of her life with wild-eyed stories and witticisms and unpredictability. And then it can be winter, where she is prim and devoted – either to you, or herself. Nobody knows when the wind will change, not least the Gemini woman herself, and so you can enjoy her in the moment, but never expect the moment to last.

She leads with her mind over her heart, and when she hurts your feelings she’ll understand on an intellectual level, but struggle to truly empathise. She uses words as a weapon for both good and very bad – she’ll articulate exactly what it is you struggled for the words to say yourself, but she’ll also bite viciously and venomously, forgetting that a less verbose sign isn’t equipped with the same tools for battle. Her mind is as sharp as her tongue, and jousting with both is a favoured pastime. She doesn’t mean half of what she says – she’s using what she’s got to get a reaction, to get a rise out of you for entertainment. She forgets you won’t be able to shake it off for sport.

What’s frustrating is that the Gemini woman is endlessly charming. You’ll want to throttle her to death, often, but because she’s a chameleon, because she blends into your favourite incarnation of her right before your very eyes, you’ll forgive her. This will happen again and again and again, and she’ll have no idea how hard work she is to keep around. Good job she travels a lot – it gives you a chance to miss her. Life can often be more exciting with her around, but it isn’t half exhausting trying to keep up.

You’ll go to her when you need to bask in the positivity of somebody genuinely vibrating on a level set to “endlessly enthusiastic”. Her attitude to life, to love, to work and to family is forever playful and light. When things get too heavy, too intense, Gemini woman isn’t the one who’ll stick around, but once you’re ready to come out from rock bottom it is she who will build you back up to the sky.

Flirt. That’s what she is – a slave to the romantic chase, with many ex-partners to her name. She’s not necessarily promiscuous so much as trying on many different hats to reflect the many different sides of her self. Her truest match will be a secure one, willing to give her the room to be them all, and sometimes all at once. A Gemini woman will be smothered under the expectations of love – she’s like a tired toddler: she is her own self-soother, and if you try and placate her in any sense of the word, she’ll tantrum. Best to let her figure out what she wants, without trying to provide the answer for her. She’ll be more loyal to you that way. With her gift for words you’ll never have to wonder what she’s thinking – she’ll have no problem telling you once she’s given the room to find out.

Responsibility doesn’t come easily to Gemini woman – she’s happy to outsource anything that requires too much attention to detail, as she’s a “big picture” kinda gal. She’s a visionary and a leader over a planner. It’s better for everyone if somebody else is in charge of crossing the t’s and dotting the i’s. She’ll probably have a million different projects on the go at any one time – Gemini woman needs to be super busy, always.

You’ll think she’s crazy, in short. Impulsive and difficult and changeable and argumentative for the sake of it. And she is – she is all of those things. She’s spontaneous and fearful of monotony, open-minded and moody. But oh God, how she’ll change you through the challenge of it all. She’ll mirror your best and worst parts and show you things you never knew you needed to see. The ride with Gemini woman will never be a smooth one. Prepare for that much. But it will be worth it. The best advice for loving her, as a friend or romantically? Draw boundaries early on – and stick to them. Do that for your own sanity. You’ll need to.