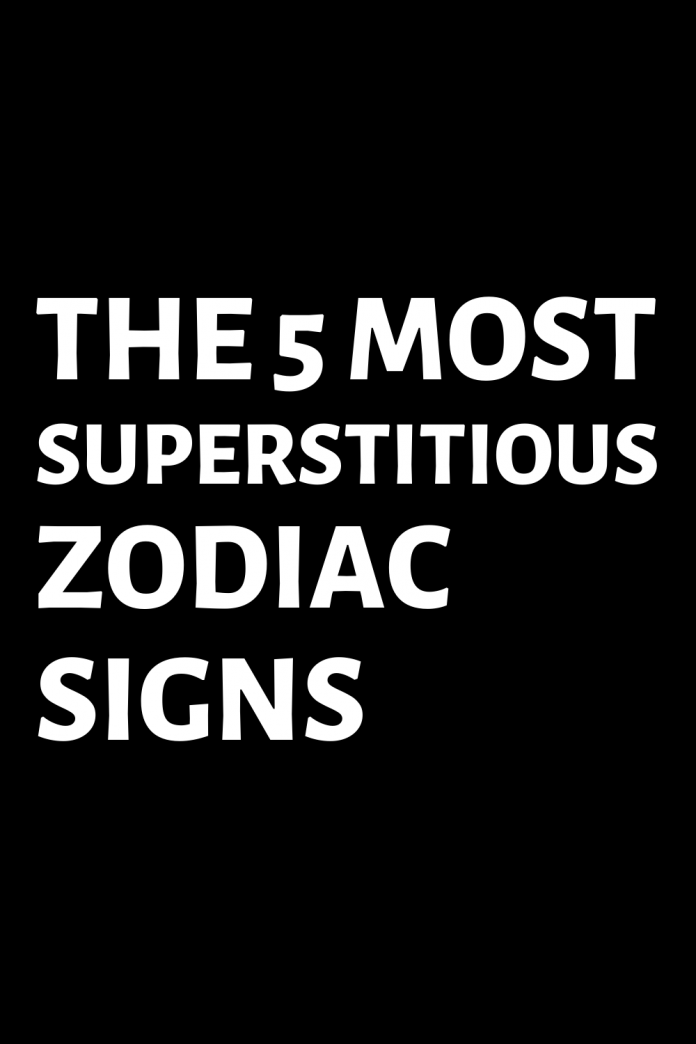 Find out which are the most superstitious zodiac signs of all.

Very often we talk about superstition and rituals or strategies to be put in place to attract good luck, making sure to keep bad luck at bay. There are many superstitious people, each in a different way. There are those who do not like to go under the stairs, those who do not leave the house without their personal amulet and those who always wear the same dress at each exam, considered lucky because they were worn on the first lucky exam.
There are many ways to be superstitious and even if it is difficult to understand which is the predominant factor that makes the difference between those who believe in good and bad luck and those who are concerned only with living for the day, one thing is certain: stars have their influence on this too. According to the zodiac sign of belonging, therefore, one can be more or less superstitious and since it is a way of being closely linked to personal feelings, the ascendant has even more importance. For this reason, today, we will try to understand which are the most superstitious of the zodiac.

The most superstitious zodiac signs of all

Aries – Those superstitious when needed
Those born under this sign tend not to overlook anything. For them, life is like a game of which it is better to know the rules to be able to get around them. Although they are people who focus a lot on themselves and who believe in their abilities, every now and then they love to indulge even a little superstition, hoping to get help even from luck and thus obtain greater benefits in what they do. It is therefore very easy to see them carry an object brings luck in important moments or to carry out small superstitious rituals before a competition or an exam. In short, while not defining themselves exactly superstitious, when in doubt, they prefer not to leave anything to chance and if they consider it useful they do not hesitate to listen to the superstitious side as well.

Leo – The unwittingly superstitious
Natives of this sign would never admit to being superstitious. Their relationship with certain beliefs, in fact, is very much marked by fear. For them a tarot reading or a medium capable of revealing the future are things to never take into consideration. Their choice, however, does not derive from not believing in it but from believing in it so much that they are afraid of it. A negative response could ruin his day and knowing this they prefer to avoid taking the risk, limiting themselves to denigrating those who have the courage to try. At the same time, they easily believe in the classic popular superstitions such as that of salt which if it falls brings bad luck or of the mirror which, once broken, leads to the unfortunate 7 years of bad luck. In short, their being superstitious is mostly negative. The only aspect in which they tend to take refuge from time to time is that of dreams in which they believe a lot. Reason why a negative dream could scare them or put them in a bad mood throughout the day.

Libra – The attentive superstitious
Those born under the sign of Libra are very attached to traditions. Perhaps they will never manage to build amulets or act directly to attract luck. Certainly, however, when faced with the possibility of acting in a certain way so that everything goes well, they will never back down. So, if they are about to get married, they will follow every tradition to the letter and finding a ladder in their path they will do everything to never pass under it. In short, on the subject they prefer not to pronounce themselves but when it comes to acting, if there is a common rule that indicates how to move, if in doubt they will act as precisely as possible, in order to avoid retaliation.

Scorpio – Superstitious in the soul
Those born under the sign of Scorpio are probably among the most superstitious in the entire zodiac. Their way of being superstitious is very spiritual and leads them to always try to find a way to solve things “magically”. Carried for everything related to esotericism, they always tend to lend a hand to those who perceive in difficulty. Better never to have them as enemies, however, because as is well known they are also the most vengeful sign of all. Lovers of crystals and amulets, they always have a lucky charm with them, they believe in the interpretation of dreams and in life they tend to pick up mystical signals from practically everything, often even for good reason.

Pisces – The superstitious instinctives
The natives of Pisces believe a lot in signs and traditions. For them superstition is a way like any other to be able to better grasp some messages otherwise difficult to understand. Highly intuitive, they primarily trust their own feelings, always acting accordingly. Faced with a situation that is strange or adverse to them, they will not tend to back down even if there is apparently no reason to do so. Likewise, they are ready to jump into what they believe and feel good about their being. Their mix of sensations and empathy makes them highly perceptive, so much so that they are often the subject of questions and requests from friends ready to believe until the end of their strong sensitivity.