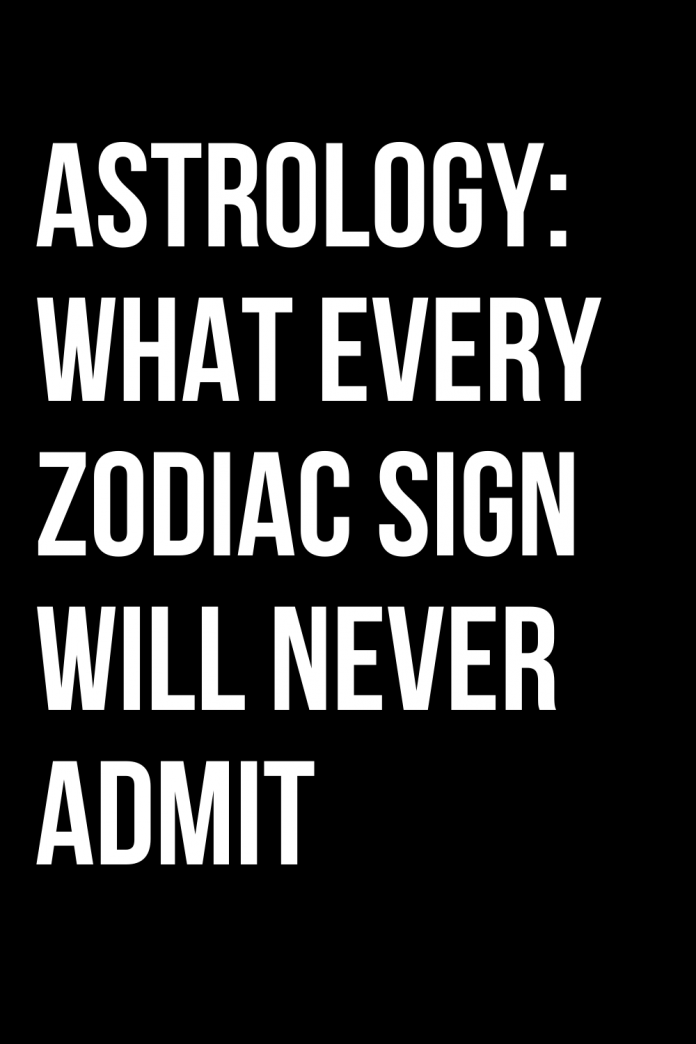 Certain truths are difficult to admit, especially when it comes to beliefs established over the years. Some of us will consciously prefer to avoid thinking about the things that disturb us, while others will choose to face them.

A deep introspective analysis is important and allows us to face our flaws and ask ourselves questions to evolve and become better people.

Your astrological sign will provide you with the answer to your limitations and shortcomings:

The desire to conquer at any cost is part of the character of this fire sign. Aries tend to lose sight of their focus due to their preoccupation with appearing beyond reproach in the eyes of others. They will have a hard time challenging themselves for fear of appearing weak or indecisive.

Taurus, like other earth signs, never give up and don’t acknowledge their mistakes. They will do whatever it takes to redeem themselves and their wrongs, but their pride will always prevent them from admitting their mistakes deep within themselves.

Beautiful and excellent communicators, Gemini will tend to abuse their qualities and engage with many people and many promises without having the means to respect his word. The essential thing for him is to secure the present moment without thinking about the future consequences. He will have problems like all natives of the air sign to concentrate on a subject.

Hidden behind steel armor, the natives of this sign well hide their sensitivity which is a common feature of the water element. They can be profoundly influenced by the observations and criticisms of others without showing anything. Silencing their feelings is an automatic reaction to hide a vulnerability they see as a weakness.

Leo loves being in the spotlight and goes out of his way to stay there: he’s afraid of losing his place as king and doesn’t like being dethroned. Like any fire sign, her passion for him can become dangerous and he will likely resort to subterfuge to counter the competition and defend his position.

The signs of Virgo stop at nothing to reach their end. Also, they love perfection which can create friction with their environment because their standards are generally binding on the norm. Deep within themselves, they would like to let go of the ballast but they will never admit it.

The native of this sign likes to help his neighbor, but will never recognize that he needs it. Free as an air element, it is difficult for him to accept that he depends on someone. This stubbornness increases the gulf that separates him from others.

Due to their great hidden emotionality, Scorpios will pretend not to pay attention and not to show their attachment. Admitting this state of affairs would do a good job for those water sign natives who lack realism in both their perception and their relationships.

Balance is an essential value in the universe: which is not the case for the natives of this sign who forgive too much and are good with everyone, even with those who will take advantage of them. It is not bad to focus on yourself and define a boundary to your kindness: you need to know how to set limits and above all impose them.

When things go wrong, Capricorn will never admit the situation and will go out of their way to show that all is well. Accepting help and opening up to others is not part of his character. He is afraid of passing for a weakling.

This air sign is a talker who will readily admit many things except his mistakes. For him, he is the victim of unfortunate circumstances or deceptive people: he will always try to defend his decisions even if he is convinced that he was wrong himself.

This sign hardly recognizes his responsibility in everything that happens to him: he lives in his world where everything goes wrong because of others. His element is water, hence his lack of realism. Acknowledging his mistakes would do him a lot of good.