Those born under the sign of the bull are described as patient and hardworking yet stubborn and possessive. Being in a relationship with a Taurus means not only finding out what makes the Taurus swoon, but also what makes them tick. Here are 5 brutal truths you should know before hitching yourself to a Taurus. (And if you’re already in a relationship with one or ARE one yourself, maybe these sound eerily familiar.)

1. We won’t stop arguing until we get our point across. My boyfriend and I argue about everything and nothing. Our tiffs are as silly as what flavor ice cream to buy for movie nights (I opt for bubblegum sherbet; he prefers vanilla) and whether we think the YouTube video we’re watching is sexist. But no matter the fight, a Taurus always wants to get his or her point across and we’re really not concerned whether we’re right or wrong. (Pssst: We’re not particularly proud of this trait because it makes us feel guilty for being so stubborn, but to be fair, we’re usually not the ones to start the argument!)

2. We’re easily jealous. A Taurus often finds herself thinking: “What if my boyfriend finds someone better?” (I’m also a professional at getting jealous of random girls I’ve never met!) Meeting our guy’s female friends and getting to know them helps a Taurus get rid of those feelings of possessiveness and jealousy.

3. We don’t often lose our tempers but when we do, it’s BAD. Yes, Tauruses (Taurii?) are patient, but on those rare occasions when we actually lose our sh*t, we resemble a hurricane that won’t quit hurricane-ing until you see our point. (See #1). (And we’ll be sure to bring it up in later arguments because we’re nice like that.)

4. We’re fiercely independent. As a Taurus, we prefer to do things by ourselves and by our own rules and schedules. My boyfriend, on the other hand, is as spontaneous as they come. Although there are moments when I find his gestures sweet and romantic, part of me is annoyed by the disruption in my color-coded and perfectly-labeled calendar. (Where do I insert “Spontaneous Date” between “Finish 1500-word article” and “Doctor Who Marathon”?) This trait also means that if a Taurus has a problem, we prefer to solve it on our own without your help.

5. But despite all of the above, we’re loyal as hell. An important aspect in every relationship is faith and trust and if a Taurus decides to trust you that means you’ve most definitely earned it and we’ll stay loyal to you for the long haul. But betray our trust? You’ll be lucky if we ever speak to you again. After all, we forgive, but we never forget.

FIND OUT WHO THE PASSIVE-AGGRESSIVE SIGNS ARE: THEY KEEP EVERYTHING INSIDE!

THESE TWO ZODIAC SIGNS ARE PERFECT FOR BEING TOGETHER FOR LIFE 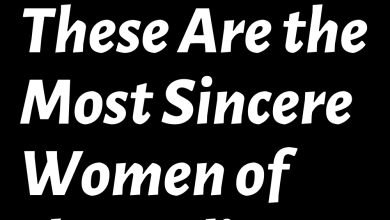 These Are the Most Sincere Women of the Zodiac