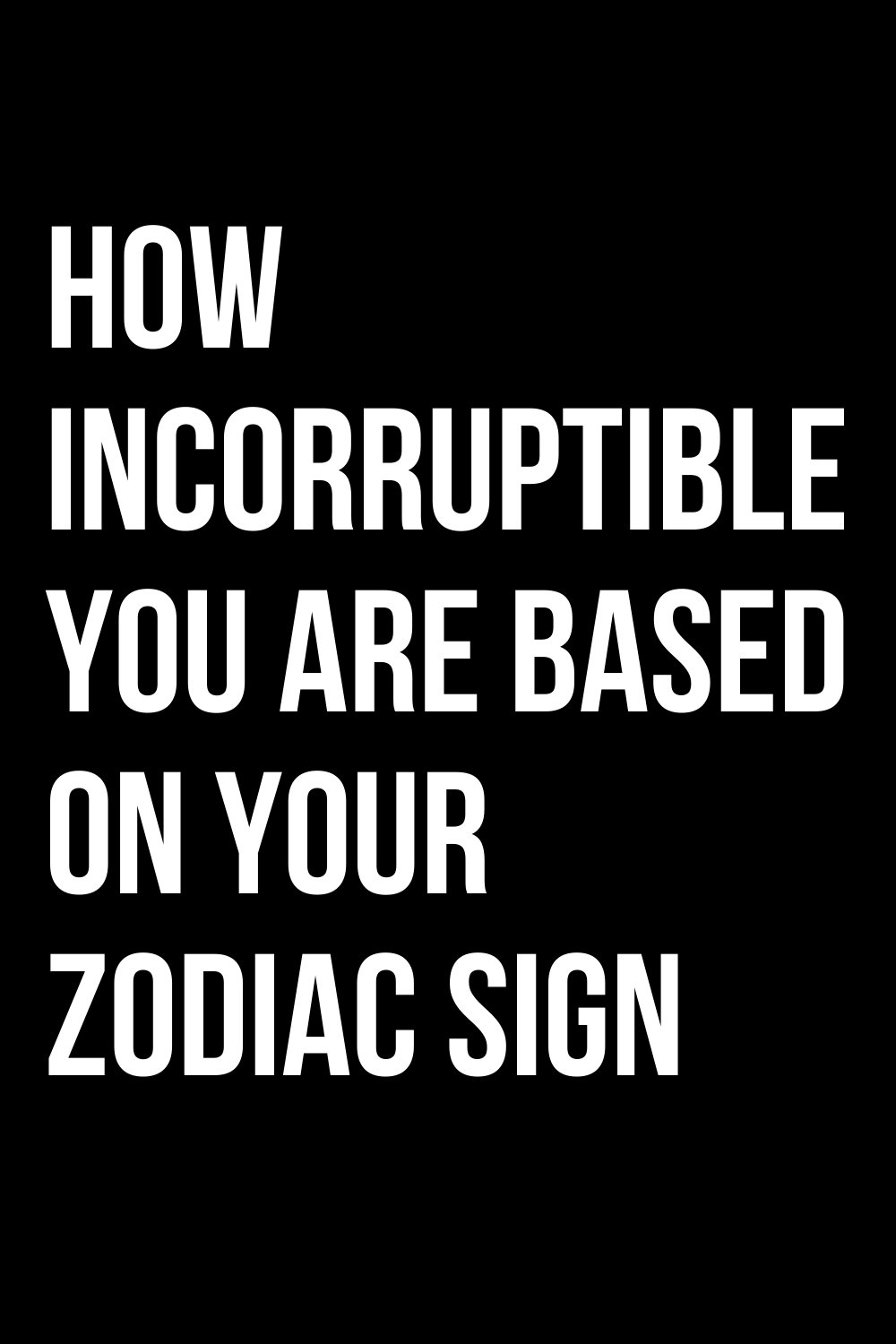 HOW INCORRUPTIBLE YOU ARE BASED ON YOUR ZODIAC SIGN

When it comes to human values ​​and strength of character, one of the aspects that immediately comes to mind is the ability to maintain one’s position at any cost. When you believe in something unless you discover that you are wrong (a situation in which admitting it is always a sign of maturity), it is right to carry it forward beyond the common thought and the attempts that others can make to convince us to change. Of course, there are situations and situations and sometimes a way of thinking can change over time but what we want to understand today is how much each of us is incorruptible or not. Since among other things, this way of being can depend, at least in part, on the zodiac sign, today after having seen which signs of the zodiac are ready for the new season and how the various zodiac signs look to the future. We will find out which are the ones who never allow themselves to be bribed and who go straight on their way. Since this is an aspect linked to the way of being in the depths, the advice is to also check the profile of one’s ascendant to have a clearer idea of ​​the situation, especially if one does not fully reflect oneself with the sign of belonging.

Aries – Easy to compromise
Let’s face it, for you proving you have a firm and precise idea is not that important. For this reason, if on the one hand, you tend to assert yourself when you are convinced of something, on the other hand, you never back down if it comes to listening to the opinions of others and if you think that changing your mind or course can be useful, do not hesitate not to consider it. We can therefore say about you that despite being a decisive person who knows what he wants, you also know how and when to give in, assuming that something tempting comes in return.

Taurus – Not So Corruptible
Given that you like to know all the options in life, when you come up with your idea while hinting that the opposite might happen, you are really hard to change your mind. This depends on the fact that you like to show yourself all in one piece and that when you decide something you prefer not to have to go back to it to avoid changes of mind. This makes you a difficult person to bribe but not entirely immune to change your path if the circumstances are favorable to you. Predicting in advance how you will act is therefore impossible, even for you who in some cases manage to reverse the situation in a few moments.

Gemini – Cautiously Compromising
For you, being bribed by someone is a concept that doesn’t exist. After all, you are so used to changing your mind at any moment that it is really difficult to understand if you did it by your own will or because it was driven by the words or actions of others. If there is one thing you know it is that changing your human mind and you are almost afraid of those who always remain with the same opinions without even discussing them. Having said that, understanding yourself is very complex even for you, which is why it is almost impossible to understand if and when you decide to give in to a compromise while it can be easily predicted that you will find yourself changing your mind often.

Cancer – Lunatic even in compromise
Understanding if and how you will react to trying to get you one side rather than another is difficult. Your being moody leads you to change your mind several times, even going so far as to contradict yourself if the situation suddenly appears unfavorable or, more simply, less tempting than expected. Solid in your positions, if you believe that it is not serious for your image, you are also ready to change your mind, but you do it only if this can be useful to you and if the person for whom you would do it, in your opinion, is worth it. On the contrary, you prefer to close yourself in a position of denial or deceive those in front of you, except to leave them with nothing in hand when they least expect it. Did we mention that you are moody?

Leo – Susceptible to compromise for sheer utility
In life for you, what matters immediately after your image is a success. If changing your way of seeing things or broadening your horizons (as you like to define it) can lead you to something good, then you are also willing to let yourself be corrupted by those who show that they know more than you. This way of doing things, however, risks backfiring at any moment, especially when your game is discovered and not particularly appreciated. Fortunately, you almost always know how to get in the way and turn things in your favor and this can also be said to be your quality.

Virgo – Not corruptible but convincing
The very thought that someone acts to change your opinion sends you into a rage, leading you to close like a hedgehog in order not to give in to external pressure. This would make you a stranger to anything related to corruption or change of ideas. However, there is a but that is given by your ability to be convinced without almost realizing it when others use sweet tools to achieve the same things. In this case, you will come to change convinced that you want to and no longer feel “guilty” to the people who have tried to change you. A behavior that is difficult to understand but which, even if you are aware of it, you do not feel wrong at all.

Libra – Incorruptible
Among the signs of the zodiac, you are probably one of the most incorruptible. When it comes to ideas you are firmly on yours and there is nothing worse than someone determined to make you change your mind. If this happens your answer will be negative and opposite, to the point of aggravating relations and this regardless of who is on the other side. At the same time it can be said of you that you are a person always ready for dialogue and confrontation but that, despite everything, it remains really difficult to convince of opinions other than those that have been made.

Scorpio – Impossible to Bribe
When it comes to solidity, yours is probably the sign of the zodiac that can boast of having more than anyone else. Always decisive and precise, you always tend to get your idea of ​​everything around you and, of course, about people. And since often your “feeling” leads you to have a vision of things completely foreign to others, making you change your mind is difficult. Of course, as a person open to confrontation as you are, you always listen to those who think differently but if it comes to changing your mind you do it only if of your own free will and out of real conviction. It is practically impossible for someone to convince you of something and could even make you angry to the point of making anyone who knows you at least a little desist.

Sagittarius – Easy to bribe if they want it
For you, the very thought of doing something because someone else is asking for it is definitely beyond all possibility. In your feeling free you need to be able to express yourself and to show the world that nothing and no one can change what you decide to be every day. That said, there are situations where seeing others do something can push you to emulate them or, as you see it, to take them as an example. These are stimuli that come from afar, that sometimes you don’t control but that can lead you to do even things that until recently you used to criticize. To be honest, it is difficult to understand if you are more corruptible or influenced, certainly, there is that before acting you must feel fully convinced and make your own the change you choose to implement and that basically, you believe to belong to you as if it were your creation.

Capricorn – Better at corrupting than the opposite
You know very well, in life you like to lead others to think like you, so much so that if we have to talk about corruptibility it is easier to see yourself on the side of those who are good at corrupting than on those who he lets himself be persuaded to do or be what he is not. And if there is one thing you could become a master of, it is to convince others to come to your site without even asking them. Something that comes naturally to you and that puts you on the other side of the fence. Too bad you are not able to understand when your game is discovered and who are the people you should beware of because playing the same game as you could convince you to do things that you think were born of you but that come from them.

Aquarius – Rather corruptible
In life you like to have what you want and if that means compromising you don’t have too much trouble about it, going so far as to deliberately change your mind to get consensus. This makes you an easy person to compromise and even change your mind without batting an eye. An attitude that few expect from you and that makes you a difficult person to understand, especially because you tend to act in silence and without showing others what is really on your mind. Are you sure that all these mysteries don’t end up confusing you too?

Pisces – Not corruptible
If there is one thing that can be said about you it is that you are a person with precise ideas and with such strong ideals that you cannot be corrupted, convinced, or manipulated by anyone. Although often changing your mind is your prerogative given by your knowing how to always question yourself, if you do it it is only for your precise conviction and never, never at the will of others. On the contrary, you can be so rigid when someone tries to make you do something they don’t want that you could even go against what you think in order not to satisfy them. You are a real tough nut to crack for anyone who decides to change you.