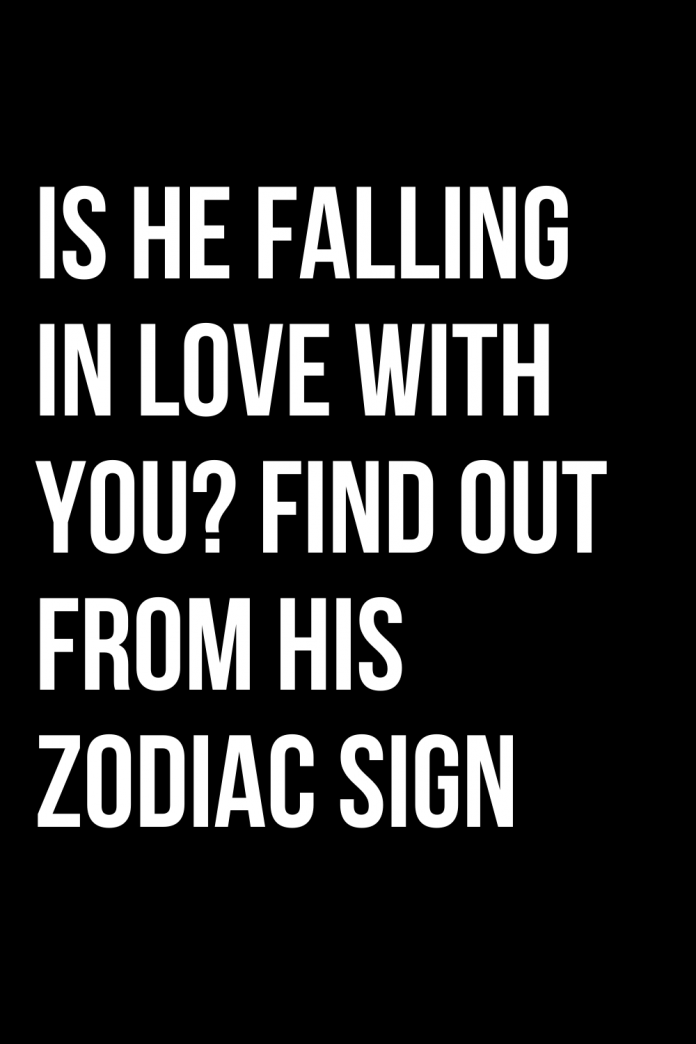 Find out if he’s falling in love with you based on his zodiac sign. The opinion of the stars.

When dating someone, one of the hardest things to understand is whether there are feelings on the other side about to blossom. Often, the ways of showing what you feel vary from person to person making it difficult (if not impossible) to get an idea about it. When you are involved, then, understanding is even more difficult. Fortunately, the stars also affect this aspect of the human being so, after seeing how each zodiac sign reacts to anxiety and what are the reasons why each sign decides to end a relationship, today we will try to find out what they are. the signs that the person we are interested in is falling in love with us. As we are dealing with feelings, the advice is, as always, to check the profile of the person involved in the ascendant, to have a better chance of grasping the various signals.

Horoscope: These are the signs that a zodiac sign is falling in love with you

Aries – Giving you lots of attention
Is the person you are interested in Aries? It is certainly someone with a lot of energy and desire to do and not without certain confidence in their possibilities. If he likes you, he has probably already made you understand something by approaching you as a friend and starting to give him his attention. The natives of the sign tend to cover people they like with kind looks and gestures, observing them and trying to understand them better. If you have noticed an approach in this sense, then, in all probability, even if he has not told you yet, he is falling in love with you.

Taurus – Creating special moments
If he is a Taurus he is certainly a difficult person to understand because feelings always end up confusing him. Despite everything, he is almost certainly a great romantic and this will push him to try to live pleasant moments with you. Building good memories is one of the things he does best and he loves to do when he gets involved. On the other hand, he is a person who hates the very thought of being able to suffer and this can lead him to become more distant the moment he realizes he feels something. Don’t worry, though, if you like it too, what you need to do is show him that he can trust you. Once you gain his trust the fears he has will fade and he will be ready to let you into his world of him.

Gemini – Simply proving
If he is a Gemini, then understanding his feelings won’t be that hard. The natives of the sign are mostly direct people, who love feelings and who when they feel something try to communicate it in all possible ways. Starting from the looks to conclude with sometimes even striking gestures, she will surely know how to make you feel loved even before you realize it. On the other hand, he must have at least one input from you because if he fears a rejection he might decide to pull back or live badly to the point of changing his attitude, becoming more closed. This depends on his way of being and on past experiences but it is a fact that should not be underestimated.

Cancer – Showing affection but confusion
A Cancer man almost always has a difficult relationship with feelings. If on the one hand, he loves to try them, on the other hand, he fears them more than anything else, and when he finds out that he is about to fall in love with someone he gets anxious and becomes uncertain about everything. If your boyfriend goes from moments of tenderness to others in which he doesn’t seem to know what to do, then it’s very likely that he is harboring stronger and stronger feelings for you. This can push him to study you from afar to understand if you are the right person if you too could reciprocate and if a story together is the right thing to think about. The positive side is that when he makes up his mind he will not hesitate to tell you and he will finally be ready to shower you with attention and love.

Leo – By Becoming More Present
Leo is one of the most self-centered signs of the zodiac. For this reason, when a feeling of love is born, the natives of the sign tend to see the person they like as an integral part of their life and this even if they have not yet had the opportunity to declare themselves. If your boyfriend suddenly shows himself to be attentive and interested in what you do, to the point of giving you advice and opinions even if not requested, then it is clear that he already considers you as if you were his partner for life. He will be very careful to expose himself but just give him some signals to make him understand that he has the green light and make him more ready than ever to come forward officially.

Virgo – Being more shy than usual
When he feels he is on the verge of falling in love, the Virgo man tends to withdraw in himself as theorized by feelings as by everything over which he has no control. If until yesterday he was behaving normally and suddenly he started sending confusing messages, appearing almost shy when you are alone, well, this is a sign that he most likely realized he felt something. He is a person with whom you need to have a lot of patience because he is completely unable to express his feelings that he will try to hide or suppress in order not to feel overwhelmed. With the right manners, however, it is possible to make him accept things slowly and by showing him interest you can even get to extort some gesture from him or speak of love. The watchword, however, is patience. Not to be forgotten.

Libra – With a lot of romance
The sign of Libra is characterized by a mix of rationality and feelings. This can make the person you are interested in somewhat difficult to decipher at least during the falling in love phase. An established vote that feels something will move in your direction starting to be romantic and sending you messages of interest that it will be up to you to decide to grasp. The Libra native does not like to be intrusive and is respectful of other people’s spaces. Should he understand that he is too many, he will not hesitate to step aside. If he, on the contrary, feels he can be reciprocated, he will start a romantic court like few others and be able to give unforgettable moments.

Scorpio – Treating You Like His Partner
When Scorpio natives fall in love, they do so with such intensity that it cannot be misunderstood in the slightest. Although linked to their own spaces and to basic personal freedom which they give up with difficulty when they love they seem to be able to put everything aside, dedicating themselves 100% to the person who stole their heart. If whoever interests you begins to make themselves more present, cares about you, and already offers you the attention that is normally given to a partner, then most likely they are on the right path to falling in love or have already fallen in love. He will expect signals without saying anything and based on these he will evaluate how to move. So be careful to make him guess the right answer.

Sagittarius – Involving Yourself in His Plans
A Sagittarius in love can be seen by the behavior he has with the person he has feelings for. If suddenly he starts to involve you in his plans, inviting you to go out, travel, and share things that until recently he used to keep only for himself, then you can start talking about love. The natives of the sign tend to involve in their world only with the people in whom they are interested. On the other hand, it is often also a sort of test to understand if it is possible to think of a story together. To conquer them definitively, it is important to be energetic, ready for anything, and eager to live the adventures without which life would not be such for them.

Capricorn – Making plans for the future
Capricorn people tend to live in the present, working hard and fully committed to the future. When he falls in love, the first thing he thinks about is to involve those he loves in his projects, initially talking about them and immediately starting to propose and ask questions about them. If he has already reached this stage, then he certainly has feelings for you and most likely he is trying to figure out if it is love and if you are the right person to think about tomorrow with. Whether this occurs or not the Capricorn man needs to believe it because he is the only way to understand if he wants to commit or not. Seeing in you a person who can look forward will surely be an extra spring for the feelings he already has.

Aquarius – Behaving more bizarre than usual
The Aquarius man is an eccentric person, full of ideas and able to surprise with his last-minute ideas. Linked to a desire for freedom equal to few, he will always find it difficult to accept love because such a feeling leads him to think that he has to put his privacy at risk. If he feels that the person he feels something for is the right one, however, he will start acting stranger than usual, trying to surprise her and show off what he has to offer. Sometimes, to follow his feelings, he even appears ready to let go of his need for freedom. Be careful, though, because the only way to be close to him is to understand and accept his needs without making him feel wrong.

Pisces – Giving You Love
When a Pisces man falls in love, it’s pretty easy to understand. He will start to look at you differently than usual, he will worry about you and will tend to show parts of himself that were hidden until recently. The way of loving the natives of the sign is total but often clashes with the fear of suffering. For this reason, they may initially have conflicting attitudes, showing themselves to be affectionate but wary. To conquer a man of this zodiac sign it is, therefore, necessary to allow him to trust and make him understand that you feel something for him. In this way, the road will certainly be easier for both of us.