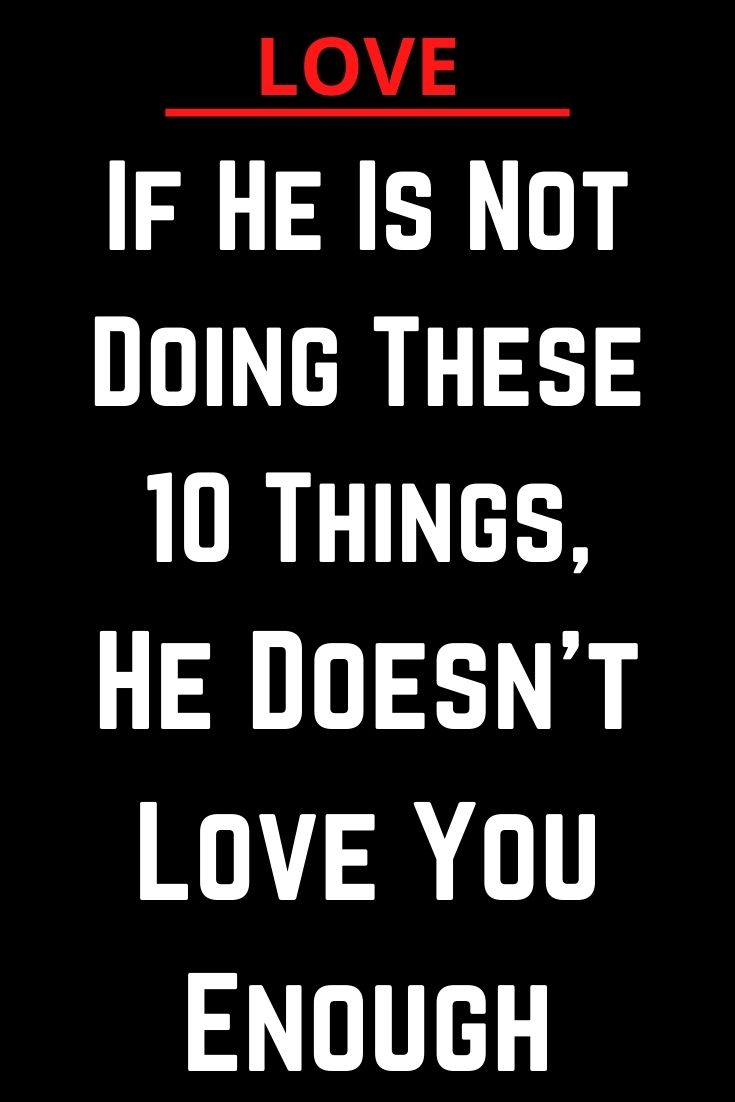 Every single woman asks herself if her man loves her enough.

Maybe at some point in your life, things will be smooth but there will be some bumps in the road where you will think about your man and his feelings.

If you are wondering if your guy loves you enough, just pay attention to the things that he does for you.

If you want to know which things, I suggest you read more!

He doesn’t support you

A man who loves you will want to support all your dreams.

But if you catch him sabotaging your business life or your relationships with family and friends, you should better watch out.

A man like this doesn’t love you and he is just being with you to satisfy his own needs.

Your happiness will never be more important to him than his own and he will never make you a priority.

He doesn’t meet your family and friends

You all probably had a partner who wanted to meet your family and your friends but when that doesn’t happen you can be sure that something is not right.

I mean, they have been a part of your life much longer than him and it is okay to want to spend some time with them.

After all, your parents made you the person you are today and your man should be grateful to them for that.

If he doesn’t see this, he is not worth your time.

He is not faithful

If he really loved you, he would resist the urge to cheat on you.

There are couples who can recover from that but there are some that can’t.

After all, when you lie in bed with him you will never know if he truly wants to make love with you or if he will be thinking about another woman.

Don’t ever put up with this because you deserve way better than a man who will give you away for a meaningless night of passion.

WHAT?? I mean, it can happen to anyone that they embarrass you accidentally but if your partner does that on purpose then the two of you have some serious issues going on.

A man who loved you would never do that to you, so it is time to wonder what the heck you are doing with someone you feel bad with.

Don’t put up with his crap, no matter how much you love him.

Remember that it is better to be alone than in bad company and if you are patient, I am sure that it is only a matter of time before a real man will knock on your door.

He doesn’t put a label on your relationship

A man in love will always be proud of his partner. He will love her, kiss her and hug her, not worrying who will see him.

But if you see that your man doesn’t want anyone to know about the two of you, you should worry.

There must be a reason good enough for him to do so and if he really can’t explain it, just finish your glass of wine and leave.

He never tells the truth

If you catch your man lying you should consider this a big, red flag.

If he truly loved you he wouldn’t be hiding anything from you. So, don’t be soft on him even if it is the teeniest lie in the world.

You deserve to know the truth and if he can’t give it you, then he is not the right one. Once a liar, always a liar!

He doesn’t listen to you

There will be times when people won’t be focused on what their partners have to say but if that happens every day, something must be wrong.

If he truly loved you he would listen to you, even if he was busy and running from one meeting to the next.

That is called respect and it is an essential part of every relationship.

We are living in a world where it is very easy to reach out to someone with a simple message, Tweet or phone call.

If you feel that your man is glued to his phone but he never actually calls you, then something is not right.

It seems that he has more time for others and no time for you, so why keep trying.

When he realizes what he has lost, it will be too late. He will send a text and you won’t reply and he will call but you won’t answer.

Unfortunately, this is the only way to teach him a lesson so he never does this to another woman.

He never asks for your opinion

When you love someone, their opinion should matter, right?

But with your man, things are completely different and you catch him asking strangers for opinions about his life and he never asks you.

This is a huge, red flag and you should seriously talk to him.

Tell him that you feel neglected and that behaving like that is not what you want out of a relationship.

If he doesn’t change and keeps doing things on his own, just give him a one-way ticket.

He never says he loves you

A man like this will probably say that he doesn’t need to say that he loves you because he shows that by taking care of you. WRONG!

If he loves you he won’t be able to control saying that.

It will come out of his mouth as natural as breathing. So, don’t let him make a fool out of you and run as fast as you can.