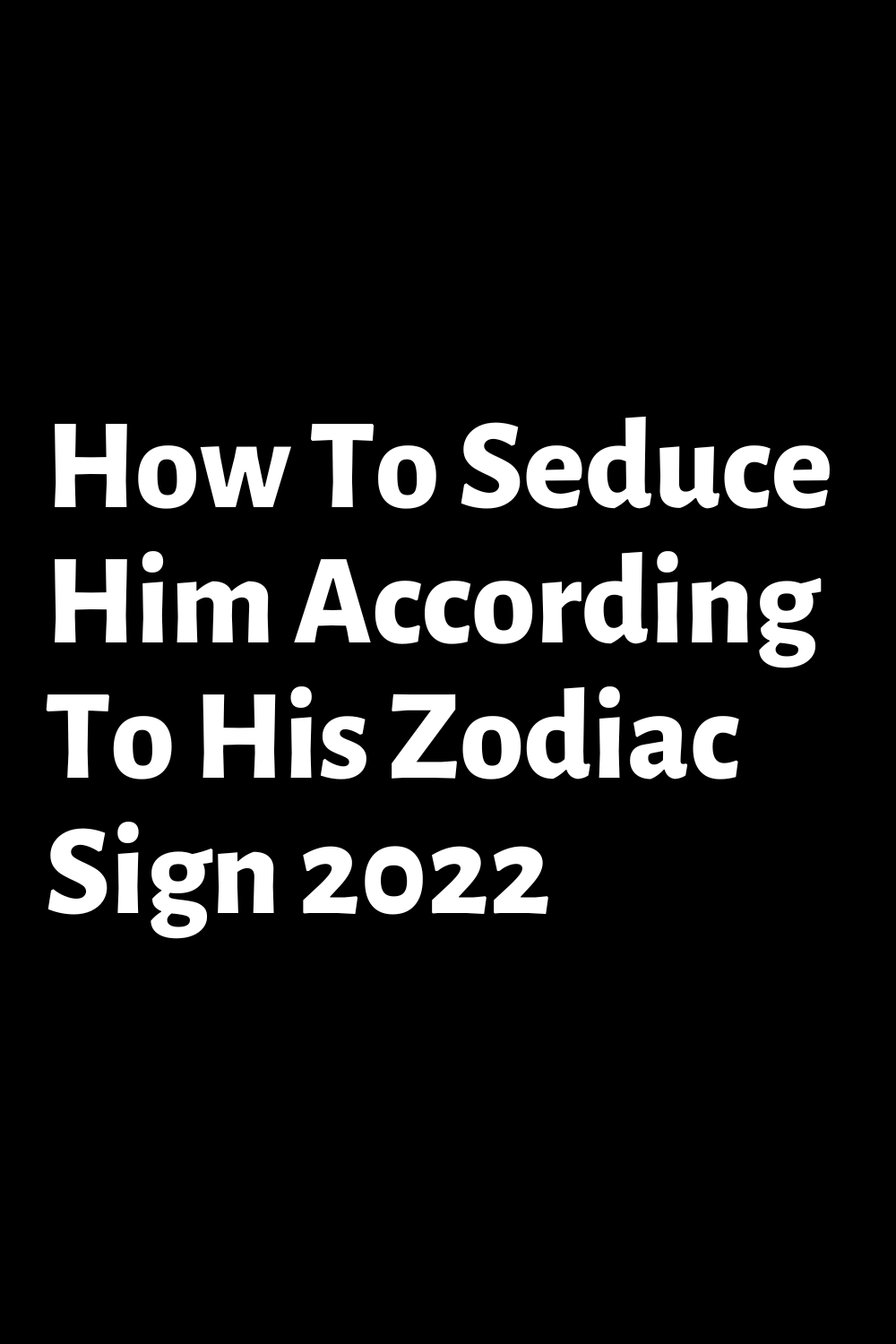 How To Seduce Him According To His Zodiac Sign 2022

Go for it! An Aries man will hold back and he will wait for you to make the first move. He likes to be chased.

Also, if you want to seduce an Aries, bombard him with compliments. Find the interesting traits he has, those traits which no one else has, or the really unusual things he does, and compliment those.

He will know that you have paid attention even to the little things he does and he will appreciate you even more. Also, be very upfront with an Aries.

Tell him about yourself, how you feel and what you want from him, and if he sees that you’ve been lying to him, he will simply walk away from you.

A Taurus man doesn’t like the usual hook-ups, what he wants is something more special, something unique and different.

They want you to dedicate some time and energy into flirting and make it a completely new experience for a Taurus man. If you know a place he’s never been before, take him there and tell him that he’s the first one to go there with you.

A Taurus man also loves a woman who can turn him on with words; not with dirty talk but with conversations on a deeper level, which is why it would be best to be his friend first, before starting to flirt with him.

Learn the hottest things to say to a guy to win him over.

Gemini men want mental and emotional stimulation. To seduce this type of man, you will need a lot of knowledge regarding topics in which they’re interested, like art, literature or music.

They want someone who’s into the same things as they are. Also, don’t rush it with a Gemini man. Why? Because you might piss him off if you’re trying to kiss him on the first date or something similar.

A Cancer man won’t jump into bed with you right away. He will probably make you a romantic dinner, with candles and all the things you like.

You will need to seduce him with light touches and with your eyes. Look at him like you really want him to be with you. Maybe he won’t pick up on the signs right away, but be patient.

He does need his time, but when he’s yours, he won’t ever look at another woman again.

When it comes to these lions, you need to put all of your energy, attention and time into the process of seducing them. Why, you may be asking?

Leos love to be the center of attention and they want you to make them your highest priority. But find a balance, don’t overwhelm him with everything, because he will get bored really fast.

Find something where you need his help and let him be the hero of the day. Or simply kiss him right away, on the lips. Yes, that will work!

A Virgo man wants someone in his life who’s REAL. To seduce a Virgo man, you don’t have to act like you’re someone you’re not because he will see right through you.

Also, Virgo loves everything to be clean, so be sure to look and smell pleasant when meeting them. And keep your environment clean as well. One more very important thing is to find all the things he’s insecure about and compliment them.

Virgos aren’t too confident so it’s really important to show him that you don’t see his imperfections as such, but rather as something very beautiful.

Balance is the biggest turn-on for a Libran. He wants you to be interested in him, but not too much – that will just scare him.

To seduce him, you need to be upfront about what you want from the relationship and how you want it. Communication is very important to him.

Also, don’t show him too many options, as it’s well known that Librans are very indecisive. Tell him what you want and he’ll go along with it.

Just show him, with your body language, that you want him and he’ll be all yours. It’s that simple.

They love to make it look like you’re the one doing the seducing, but before you know it you will fall head-over-heels for the Scorpio man. But there is a downside to this; Scorpios love to be mysterious, so you’ll need to play along.

Don’t let him know everything about you or he will get bored of you very quickly.

Make him laugh. That’s it. Do something fun, do something that will show him how much humor there is in you. Make jokes about certain topics and laugh together.

When he sees how happy you can make him, he will be all yours. There is not much you need to do here, just have fun.

The lovelyiest sign of them all! Start every encounter with a passionate kiss and with loviest tension. That is the easier part. The harder part of seducing a Capricorn man will be to show him your strategic and rational side.

If you have both of those sides, the lovely  one and the rational one, he will be yours for more than one day. Maybe even forever.

There is a misconception out there about Aquarians. They are not as outgoing as they might look. So don’t take an Aquarian man out to a crowded place when you’re trying to get to know him because he likes to enhance the mind first and then the body.

He’s very intelligent and he wants the same thing from his partner, so arm yourself with a lot of knowledge. Also, something very important to know is that an Aquarian man will not be loyal to you if you’re not ‘the one’ for him.

If he feels like you’re being too clingy or boring, he will easily move on.

If you want to seduce a Pisces man, you need to give him everything you are and even more.

Show him how much he means to you with some romantic gestures and that’s everything you need to do to win over the Pisces man.