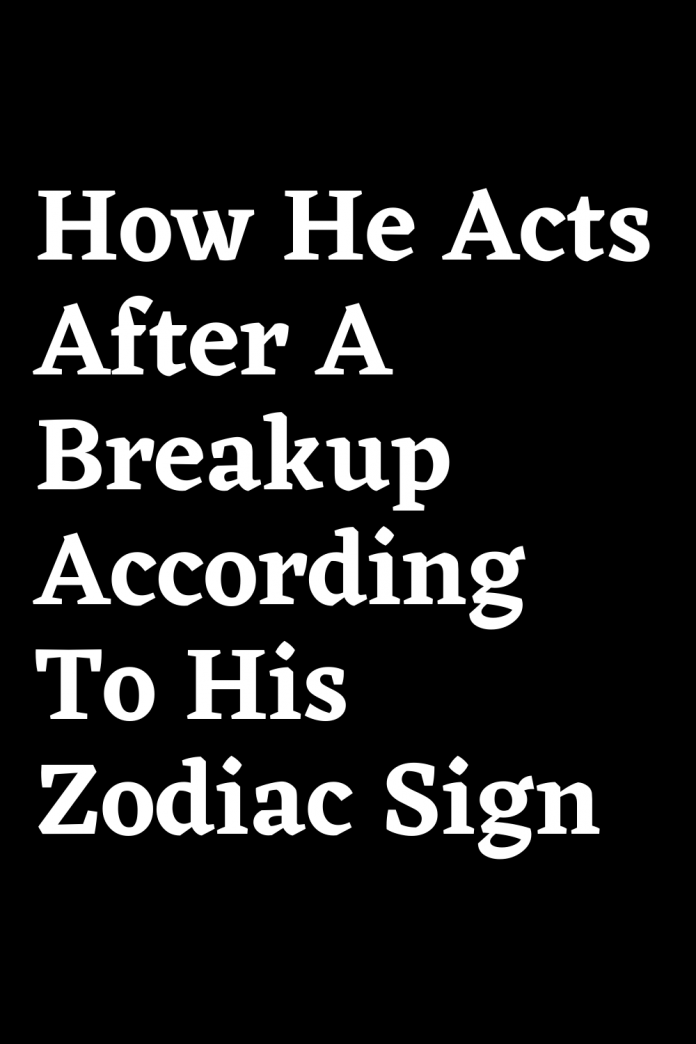 You don’t want to break up with an Aries. They get so crazy with pain that they do irrational things. Your Aries boyfriend will do pretty much anything just to hurt you.

If you have any jealous female friends, don’t be surprised to hear that your ex slept with one or more of them right after the breakup only to hurt you and pay you back in a way.

There is no excuse for this kind of behavior, but the adventurous spirit of an Aries simply doesn’t let them react in a different way. So, be ready for anything.

You don’t have to be scared of Taurus. He is not dangerous because he can cope with his breakup.

He won’t plan a terrible revenge because he knows better. He knows it won’t work, so he won’t even bother.

Taurus are very rational. He will suffer in silence and maybe take up some poetry or music. He will find peace, and he will get over you nicely and quietly.

They become someone completely else. They shut down the world.

They are usually very social and happy people to be around, but when they break up with someone, they’ll pull back into their own world.

Your Gemini ex won’t plot a plan to get you back because he knows when the relationship is over.

He knows that there is no point in saving it. So he’ll be alone with his own thoughts until he moves on.

He won’t have time to be in pain. Emotional Cancers would probably fall apart emotionally if they let the fact you’re broken up influence them.

So instead, they dig their heads into work and that is all they do.

Their schedule is so busy that they simply don’t have time to think about your breakup. He will avoid love and anything related to love.

So if he is asked to go out with a couple, he’ll make up an excuse to turn them down. He’ll act like this until he realizes that it’s over between the two of you and moves on.

He’ll act like everything is fine. He’ll even joke about it, but the truth is, he is in an emotional mess. But proud Leos will never admit that.

They don’t want to leave an impression that they failed in something.

They hide their emotions from others, and even if they look like they are fine, they are not. They are hurting so hard, but they never let anyone see it.

He is a control freak, and when something is out of his control, he will lose it. He will demand answers, and he will bother you until he gets them.

Such an organised person just can’t stand any kind of mess—a physical or emotional one.

His curiosity doesn’t mean he can’t deal with the fact that you’re not together. It doesn’t mean that he’s hurting, so don’t mistake his behavior for that.

He just needs to know. And if you tell him, he will leave you alone.

He will do pretty much anything just to numb the pain. Usually, Libras are rational, and they crave stability. They want to find the balance in everything.

But, when it comes to heartbreaks and breakups, they lose control immediately.

They won’t haunt you or bother you, but they will do extreme things, like they’ve lost all the rationality and sanity they had.

Although he is no longer with you, secretly he is still hoping you’ll get back together. Other signs make peace with the fact that their relationship is over, but Scorpio just can’t move on.

Usually Scorpios are very sensitive and any kind of change strikes them.

He won’t make a big fuss about it, and he won’t seek attention.

You can be one hundred percent sure he won’t wait for to corner you and demand an explanation or wait until you get somewhere in public to make a scene.

He will explode with rage if you dump him. Sagittarius men don’t handle breakups that well. They go with their first reaction and that is anger.

They can’t control themselves and you can be prepared for anything. They really can’t think because of all that rage.

But, when he calms down and the passion descends, he’ll feel sorry for what he has done, and he will probably apologize to you.

So, let him kiss and make up because then, he’ll truly let you go.

He will close inside himself, making sure that no one gets near. Capricorn men take a long time to heal after a breakup because they are terribly scared to get hurt again.

You might be surprised by this kind of reaction from a Capricorn because they look cold and unemotional, but actually, they are really emotional.

The thing is they keep everything to themselves.

He will be very reasonable about your breakup. He won’t be making any scenes or sulk.

He will deal with it and try to approach your breakup from an intellectual level.

He will try to figure out all the pros and cons of your breakup and try to find a solution that will make him sleep better at night.

This may look too much for you, but this is how an Aquarius deals with everything bad that happens in his life.

It’s the best way to go for them, and they heal that way the fastest.

He will float away in a dream world of his, trying to forget that the relationship you had ever existed.

He’ll try to get rid of every little reminder of you from his life. It’s easier that way.

Because if he sees something that reminds him of you, all those memories will come rushing back not letting him forget you.

This is maybe a bit over the top, but that is exactly what he needs to move on.