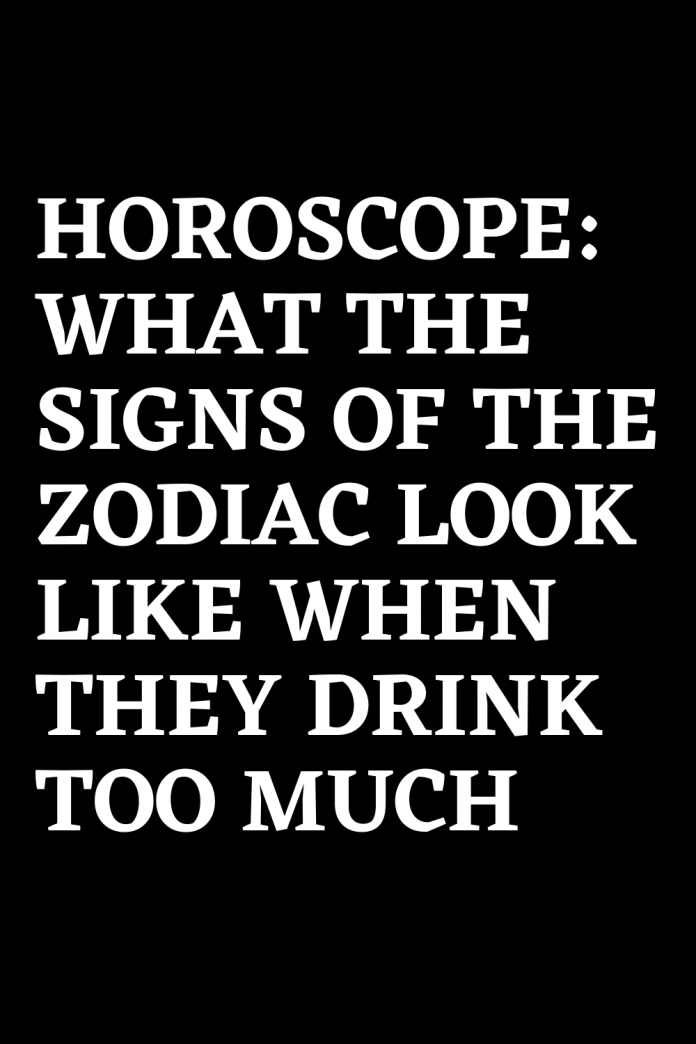 Find out what the various signs of the zodiac look like when they drink too much.

When it comes to personality it is easy to imagine how it can appear differently based on certain nuances. The same person may seem different to us in his transition from serious to euphoric. In the same way, he can seem like a completely different person when he falls in love or is going through a particularly stressful time in his life.
Each of us is made up of numerous facets that fit together giving life to changing personalities, constantly growing, and at the same time always equal to themselves. In some ways, it could be said that part of the charm that each of us has depends precisely on this sort of unpredictability that leads us to always appear different while maintaining a sort of matrix that allows others to recognize us always and in any case even only by the ways of doing.

But what are we like when, for example, we drink too much? A famous saying goes “in vino veritas” and maybe someone will agree with it. However, this does not reveal how we look to others when the mind is clouded by alcohol. Since the way of reacting when drinking is also linked to the influence that the stars have on each of us, after having seen which are the signs of the zodiac that already need a break and what is the thing that each zodiac sign fears more of himself, today we will find out what the various signs are like after drinking. Since this is an aspect linked in a particular way to the way of being and feeling, the advice is to check the profile of the ascendant to have a precise idea for each sign.

How the signs of the zodiac become when they get drunk

Aries – Potential seducers
Those born under the sign of Aries, when they raise their elbow a little too much, tend to indulge in sometimes excessive comments about others. So it can happen to see them flirt even if they are busy and to be brilliant to impress those in front of them. This aspect of theirs, linked in particular to the need to always be at the center of attention, almost always places them in uncomfortable situations, especially if they have a jealous partner by their side. After drinking, they know no limits and can try with someone even in front of their partner, only to justify themselves with the excuse of alcohol or saying that they were just “playing”.

Taurus – Goofers
The natives of Taurus, when they drink too much, tend to get clumsy, appearing to be real goofs. The way they act, however, makes them appear tender in their way, thus making them even interesting in the eyes of others. It can therefore happen that they end up collapsing to sleep on the first sofa they meet or that they find themselves flirting with those who find them attractive precisely because of the funny way of being. In short, when drunk, they are unpredictable. Certainly, however, they do not act with ulterior motives but are only driven by the underlying happiness that alcohol gives them, and that mixes with the ability to harm themselves or say blunders at any time.

Gemini – Hypersensitive
Those born under the sign of Gemini, when they drink they give their best with their emotionality. If until a short while before they played to show themselves tough, after a few drinks they begin to show off many feelings, all taken to the extreme. It is not excluded that they start complaining about their own life, revealing less public aspects and finding themselves crying for some ex that they thought they had forgotten but that when drunk seems to be important again. In short, when they drink they lose the sense of words, saying whatever comes into their mind and thus finding themselves tangled up with words. The beauty is that they will hardly remember what has been said. So trying to follow and understand their speeches will prove to be decidedly useless.

Cancer – Weepers Cancer
natives are sensitive people even when sober. When they overindulge their drinking, however, they tend to become real whiners, saddened by everything and complaining about it to everyone around them. Whether it’s a movie they’ve seen, a friend they don’t approve of, or some problem that haunts them, they won’t mind saying everything they think, ending up crying about it. The positive side? After letting off steam, even though it may take a while, they seem to return to normal. They also appear more relieved, as if the outburst had taken effect. And all even if they will hardly remember. Or maybe they just pretend not to remember?

Leo – Superficial
When they raise their elbow, those born under the sign of Leo tend to give their best in terms of superficiality. Completely taken by themselves, they begin to think about their appearance and seek even more openly than usual the consent of others. Sometimes they do it with so much determination that they are even cheeky. One thing they care little about is also because if they find themselves exaggerating they can always blame alcohol and thus feel justified for anything said or done. An attitude that few would be able to carry on without feeling embarrassed but which they do particularly well, so much so that they seem almost experts in doing so.

Virgo – Irosi Virgo
natives tend to express all the anger they keep to themselves when they drink. Thus, they become argumentative, critical, and often aggressive with those who are in front of them. It is a way of doing things that starts slowly but explodes, always leaving those who have to deal with it stunned. Sometimes they can appear cheerful but it takes very little for things to change. One word too many and their anger will come out making them say things they will probably regret but for which, proud as they are, they will never apologize.

Libra – Purposeful
Those born under the sign of Libra, when they drink they tend to see things from a different perspective which brings them most of the time things in a positive way. Thus they find themselves making projects they would normally think about for a long time. With others they show themselves more open than ever, letting themselves go to confidences and telling things about themselves that they would normally take care to keep quiet about. In short, they become more communicative, open, and easy-going than they usually are. A way of being that makes them pleasant and captivating and that in any case does not change them much in the eyes of those who know them who, at this juncture, feel somehow closer than usual to their true nature.

Scorpio – Reflective
The natives of Scorpio are people who tend to live almost everything first in their minds and then also in their ways of acting. This also occurs when they tend to drink more than usual, with the difference that they get lost more than ever in ruminations that they usually manage to avoid. Thus, they risk being less of company and appearing more distant than ever. They can rarely become cheerful but it is something that does not last long because nothing is enough to make them sadder than ever and above all melancholy. With their minds turned to the past, they can close in on themselves, walking along the avenue of memories in ways that only a few close friends have access to.

Sagittarius –
Unfiltered Direct by nature, when they tend to drink too much, those born under the sign of Sagittarius tend to get… heavy. Although playful and to have fun, they tend to no longer have filters with the outside world. This leads them to attitudes that for many can be over the top and words that can sometimes hurt others. All this, of course, happens without their realizing it because their way of seeing their sincerity should always be appreciated. Getting into arguments with them can therefore become all too simple, triggering meaningless controversy that they probably won’t even remember the next day. Better to wait until they are lucid again and hope that they remember what was said.

Capricorn – Daredevils
Capricorn natives, when they get a little tipsy they become braver and eager to prove themselves. Thus, they find themselves planning things they probably never will, daydreaming about situations they cannot live in in their present. They do it with simplicity, moved by the desire of the moment and without ulterior motives. Nonetheless, they are so contagious that believing them is far too simple. All with the obvious complications that can arise when, back to their senses, they see those moments as simple flights with the imagination, thus risking to deceive those who have found themselves believing in them and making plans with them. An aspect to keep in mind when dealing with them because once the moment has passed they are not used to understanding who has experienced things differently.

Aquarius – Wrangler
Those born under the sign of Aquarius are usually quiet and calm people. When they drink, however, they tend to change, becoming more talkative and also starting to act more expansively and directly than usual. In this modality, their usually peaceful nature tends to alter, pushing them not to let the provocations fall but to welcome them and respond in kind. This can lead to those who do not expect such a way to stiffen, making the general atmosphere tense. Fortunately, this is something that rarely happens and tends to be short-lived. A few moments are enough for them to realize what they are doing and retrace their steps. Sometimes, however, a moment can be too long. It is always best to pay attention to them when they decide to drink.

Pisces – Silent
The natives of Pisces, when they drink, become mostly silent. Sometimes because they get lost in their world of dreams and fantasies to chase, others because melancholy takes over, pushing them to reflect on some aspects of their life that they usually try to keep aside just so as not to get sad. Drinking does not bring out the happiest part of their way of being but it can help them to express themselves better from an artistic point of view, allowing them to overcome those limits that usually prefer to impose themselves. Of course, everything can go back to normal when, at the end of the moment, they find themselves in front of what has been achieved. In any case, every single time, it will be a new way for them to discover a part of themselves that they rarely meet.