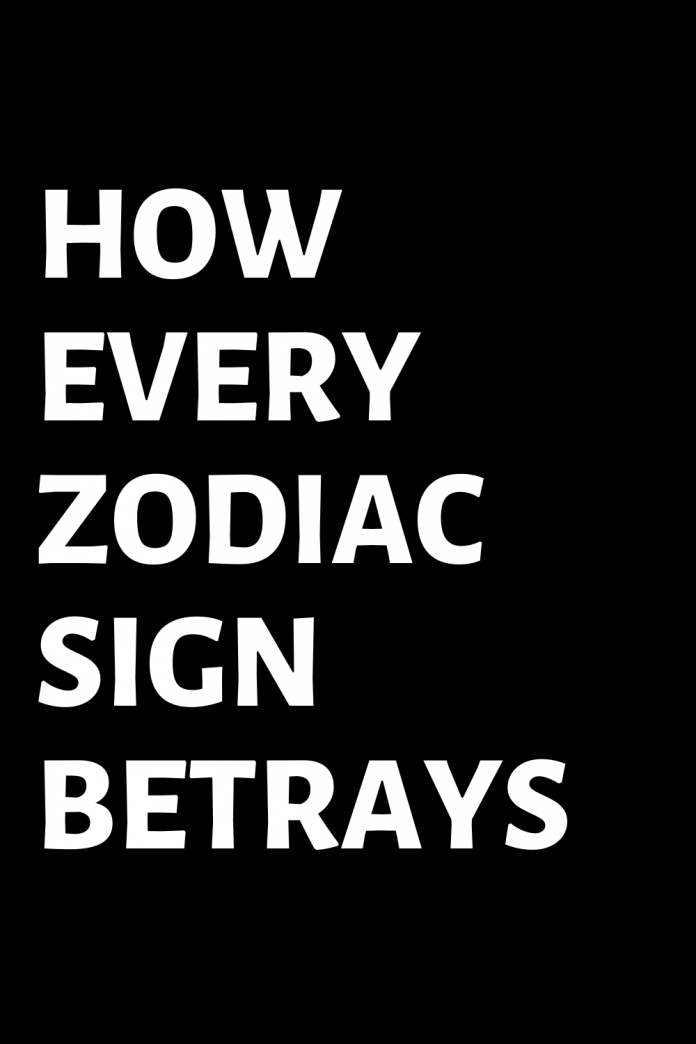 Horoscope: this is how he is led to betray each zodiac sign.

In love, betrayal is a kind of nightmare. Enemy of the most romantic and terror for the insecure, although we always try not to think about it, the fear of being subjected to it is such as to push people to be jealous, so much so that it even goes so far as to investigate in order to find out if the partner has actually made a similar gesture. Of course, not everyone is prone to betrayal. Fortunately, there are people who are used to following their hearts and who rather than act unfairly, prefer to end a relationship. A way of thinking that, however, does not belong to everyone. When it comes to cheating, it is also worth trying to understand how it happens. Each person, in fact, is usually led to act according to certain patterns that tend to remain the same even with the passing of the years. Whether or not we are traitors, therefore, each of us has a predetermined pattern or, better said, a way of betraying that if he decides to do so, he would be put into action with respect to others. A pattern that, as for many other things, depends on the stars. Today, we will see how each sign is (or would be) led to betray.

Horoscope: find out how each zodiac sign is led to betray

Aries – The carefree traitors
Those born under the sign of Aries are usually inclined to betray just for fun. For them it is not something serious and when they do they do not care much about the possibility of making the person with whom they are together suffer or not. Led to do what they feel, following the wave of the moment, they find themselves betraying because of a simple impulse. All this is combined with a way of seeing things perhaps a little too superficial and that leads them to almost never regret what they have done and to place the blame on the betrayed partner.

Taurus – Those who betray only for love
Romantics and related to their loved ones, the natives of Taurus are not hardened traitors. Indeed, it is really difficult for them to indulge in such behavior. When they stop loving, they prefer to close the story and as long as they love they have nothing but eyes for their sweetheart. However, if a stronger than normal infatuation enters their life by investing them fully, taken by surprise to the point of thinking they have fallen in love, they could end up giving in. Sure, soon after they would leave the person they were about to join the new one with with guilt over what happened. Nevertheless, they will always know how to justify themselves because they are moved by a greater feeling.

Gemini – Those who cheat for fun
Gemini does not follow a specific modus operandi. When paired with someone, they tend to joke with other people, even pretending to be attracted and all to tickle their ego. Their intent, however, is to test themselves and to experience different emotions and all without necessarily getting to betray. When this happens it is almost never planned and is experienced as a parenthesis, something to which they never give the right importance, so much so that they can no longer feel “the lover”, for which, once the moment of leisure is over, usually they no longer feel anything.

Cancer – The traitors who repent soon after
Those born under the sign of Cancer are among the most romantic in the zodiac. For this reason they dislike the idea of ​​cheating and fear cheating more than anything else. Nonetheless, if they feel they are not getting the right attention, they end up giving in and looking around for someone who can give them what they don’t get from the person they are with. This, at times, can lead them to cheat. A gesture of which they always repent and that makes them live badly with themselves and with the other person, towards whom, they will have different reactions ranging from too much kindness to anger for the mere fact that seeing it they will always remember what they did.

Leo – The lazy traitors
Those born under the sign of Leo are not lovers of infidelity. For them, honesty in a relationship is everything and they are so busy with so many commitments that they don’t even remotely think of getting involved in relationships that would risk compromising what they have. If they really had to go that far, then, they would be really lazy traitors, those who get tired even before trying. In short, in addition to not being carried, they would hardly commit a betrayal more than once.

Virgo – Textbook traitors
Virgo natives are so inclined towards betrayal that they are rarely discovered. Experts in planning and very good at predicting future moves, they are able to carry on even more parallel stories without anyone really suspecting it. Each of their actions is therefore well calculated and measured to the millimeter, so as not to arouse even suspicions in the betrayed person. Being with them is therefore a lottery and something really difficult for those who do not feel completely safe or are basically very jealous.

Libra – Those Who Betray To Get Something
For those born under the sign of Libra, life is all about give and take. For this reason, while not constantly thinking about how to betray the person they are with, they are able to manage various situations in order to be unfaithful without others realizing it. Good at planning everything, they do not feel the weight of what they do because for every action they commit they have a justification. This is why, even if they are aware of what they risk, they do not usually have particular problems, even after having betrayed.

Scorpio – Always sincere traitors
Although often labeled as one of the most traitorous signs of the zodiac, in reality, those born under the sign of Scorpio are loyal people, especially when it comes to the people they care about. In order not to lose those they love, they would do anything and not betraying is one of these. If it ever happens, however, they will make it known, obviously for the sake of truth. A sincerity that is difficult to understand but for them it is of fundamental importance and without which they would not be able to carry on the relationship.

Sagittarius – Those who betray because they are unable to manage emotions
The natives of Sagittarius are often impulsive and have always loved their freedom. For them, betraying is therefore something normal which falls within their rights. A point that, in case, they will not hesitate to make it clear immediately before bonding with someone. Feeling suffocated or controlled, in fact, would make them run away, just like a jealous person. Their eventual betrayals, therefore, will mostly be out in the open.

Capricorn – The physical traitors
For those born under the sign of Capricorn, betraying is something beyond love. While they feel involved in the person they are with, they do not hesitate to give in to the temptation to betray and in doing so, they rarely feel guilty. This is because for them the betrayal is something physical that they know how to handle as a separate thing and that they manage to keep away from feelings. A possible fling, therefore, will be difficult to discover, at least how difficult it will be to make them feel guilty.

Aquarius – Those who cheat to gain new experiences
Aquarius natives tend to cheat to explore new aspects of feelings and to feel something new. For them, there is nothing personal and they would be able to do it even if they are in love with the person they are with. Precisely for these reasons they do not feel they have to communicate a possible feeling and never feel guilt. Being accused, therefore, will only lead them to move away because they are annoyed by receiving too much pressure.

Pisces – Those who betray by creating alibis
Pisces do not like to betray, for them the loved one comes first. Betrayal, however, is not entirely to be ruled out and when they choose to do it they do it so as not to be discovered. Their technique? Make the person they’re with feel loved, so they don’t suspect anything. If caught, they will tend to minimize everything, looking for excuses that can justify their way of acting and apologizing until they are able to be forgiven.