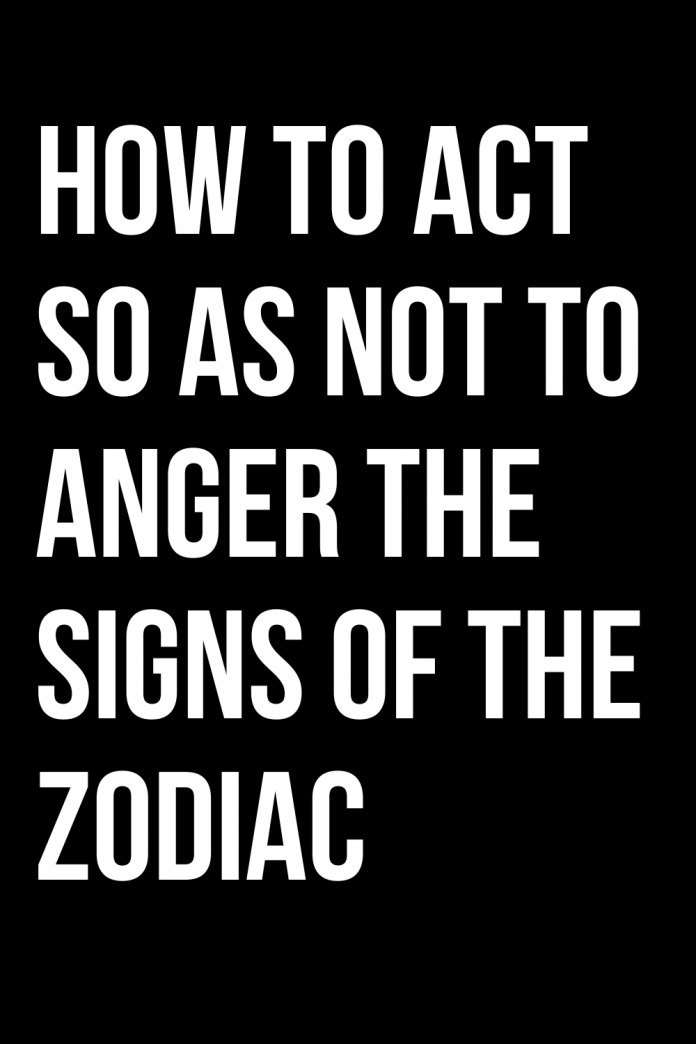 Advice from the stars on how to move so as not to anger the signs of the zodiac.

When interacting with others it is not always easy to get along in love and get along. Sometimes it is enough to inadvertently touch a topic to see a person jump as if they had been bitten by something or to hear them inveigh for no apparent reason. The truth is that we all have weaknesses that if touched, perhaps at the wrong time, can make us go crazy.
Since the components that make every person angry are often linked to the influence that the stars exert on us, today we will try to see how to behave with each sign so as not to make him angry. In this way, even dealing with the most difficult will be easier and when things do not seem to go well despite all our efforts, at least we will know why and we will be able to get over it. After having seen which are the skeletons in the wardrobe of the various zodiac signs and how nostalgic we are according to the stars, today we will therefore discover how to avoid bumping into the various signs of the zodiac. If you also know the ascendant of the person you want to learn to deal with so as not to argue, it is advisable to read their profile to have a more complete picture of the situation.

Zodiac signs, here’s how to move so as not to make them angry

Aries – Waiting for him to pass
Those born under the sign of Aries are quite smoky and able to get angry even for a trifle. The positive side is that in general their outbursts of anger, very similar to real moments of madness, tend to last very little, and once they have passed it seems to have never been there. Of course, all this is destabilizing for those who find themselves undergoing such an attitude but if you want to get along with them, the only thing to do is to learn to know them and to accept them as they are. Often their momentary anger is not even directed at those in front of them but simply expressed in the only way they know.

Taurus – Not pulling the rope
The natives of Taurus are people of a peaceful nature, who love to live peacefully and enjoy every pleasant moment that life can offer them. Often, therefore, they are misunderstood and in some way provoked with attitudes that they do not appreciate and that day after day risk loading them like springs until they are so saturated that they jump. If you want to get along with them it is good to remember that their calm is only apparent and that inside they take it like everyone else, also noting any behaviors that undermine their serenity. Better to avoid pulling the rope in situations where you confront each other because once angry it is really difficult to let them pass and the risk is that of an infinite fight.

Gemini – Giving him a rope
Gemini, as the sign itself suggests, are people with a double personalities and therefore unpredictable. Knowing when they can get angry is next to impossible because what makes them laugh today may make them nervous tomorrow. It all depends on how they wake up and what goes through their mind at the exact moment you relate to them. To try to mitigate this otherwise difficult to understand temperament, the advice of the stars is to always give them rope, following them in their moments of enthusiasm and avoiding brutally bringing them back down to earth. If something is not feasible, once the initial exaltation is over, they are the first to realize it and they should do it alone. In this way, they will be able to get along better,

Cancer – Always showing themselves on their side
The natives of Cancer are very sensitive and, therefore, also quite susceptible. When they get angry they can keep their face even for the day and if they feel attacked or worse hurt, they get to say anything to hurt those who dared to hurt them. The secret to not having to deal with this side of their character? Try to always support them, avoiding attaching to the things they care about which are family, personal tastes, and, in short, everything they love. In this way, you can count on a relationship that is always serene and devoid of the misunderstandings and spite that they usually get to put into play to win it.

Leo – Making Them Feel Important
Those born under the sign of Leo easily tend to get high about even the smallest things. This character aspect of theirs means that they manage to go from happiness to anger without realizing how it happened. Fortunately, even when they are angry they always tend to be condescending, especially if they believe that those in front of them have already regretted having offended their sensitivity. If you want to get along with them, then, the best thing to do is shower them with compliments and remind them how special they are in your eyes. Feeling important will give them a dose of good humor that will forgive you almost any wrong.

Virgo – Respecting Their Mental
Fixes Virgo natives are extremely fussy and sometimes have mental fixes that are hard to unhinge. If you do not want to incur in their anger it is therefore essential to understand what are the things that make them alter, avoiding proposing them to them. If they want their desk always tidy, for example, it’s best to never put anything on it because a single hair out of place could infuriate them. And, when this happens they alter to the point of changing moods becoming more somber than usual. Better to try to accommodate them, because trying to make them think is completely useless and can make them even more susceptible.

Libra – Respecting their need for balance
Those born under the sign of Libra are people who love harmony and who need to make it an integral part of their life. Being diplomatic people and tend to be calm and calm it is really difficult to make them angry. When this happens, however, the thing that weighs them the most is precisely having felt a similar emotion, which is why they could keep their muzzle even for days. To avoid making them angry, the stars advise them to respect their spaces and the lifestyle they lead. If they don’t like certain things, don’t get them involved. Out of their habitat, they tend to feel uncomfortable and to get upset even for the most stupid things, completely changing their way of doing. One thing that is best avoided for both parties.

Scorpio – Taking patience
The natives of Scorpio are people always on the go, to the point of being able to get angry even in front of a gesture born to be kind. It all depends on how they feel when things happen. And when they are nervous, unfortunately, anyone who comes across is destined to pay the price. It must be said, however, that they know very well that they are made in a certain way and that when they realize they have hurt someone they feel guilty trying to provide with some nice and unconventional gesture. Be careful, however, because their nature prevents them from apologizing, and returning to the subject could make them nervous to the point of making things worse. Better to grasp and accept their gestures, aware that what was said or done was not wanted but simply a discharge of nerves that are the first to repent.

Sagittarius – Showing the same thought
Yes, those born under the sign of Sagittarius love to show themselves as open and available people. In reality, however, they constantly need to feel appreciated and to know that others think like them. Diversity is not for them and if on the one hand, they expect those around them to welcome their every way of being, on the other they are rather reluctant to do the same. To get along with them, therefore, the only thing to do is to avoid contradicting them or expressing conflicting opinions. Doing so would trigger a series of exhausting discussions that would likely end up ruining the relationship. Better make the best of a bad situation.

Capricorn – Leaving them their privacy
Capricorn natives need their own spaces and moments to dedicate to themselves and no one else. To get along with them it is enough to learn to respect these moments, avoiding forcing them to fail in their way of being. When this happens they tend to get nervous to the point of becoming distant. Arguing with them, then, is a really heavy experience given the silences in which they tend to close themselves without giving way to reasoning about the reason for their attitude. Better to always stay neutral and let them choose how to act for their life. In this way, relationships will remain relaxed and there will be no unnecessary moments of tension to deal with.

Aquarius – Avoiding Contradicting
Those born under the sign of Aquarius are usually peaceful people and so indifferent to their surroundings that they have no desire to argue with others. If you come to contradict what they say, however, their ego risks feeling hurt, leading them to get angry. Even worse if you also try to make them make decisions that are far from their way of being. The natives of this sign are to be taken as they are. Any form of alteration can lead them to rage to the point of making them move away for long periods.

Pisces – Avoiding Hurting
The Pisces are very sensitive people, which is why it is difficult for them to fight without reason with others. Empaths as they are tend to feel all forms of tension as a burden, trying to avoid them as much as possible. If they are hurt, however, they can’t help but feel bad and point it out. In this case, not accepting their complaints, the risk of making them angry becomes stronger and stronger and when this happens it is better not to be around because they can give life to real scenes. The council of the stars? Avoid hurting them in every way and if it happens, immediately apologize and show them your affection, the only thing that can calm them down.