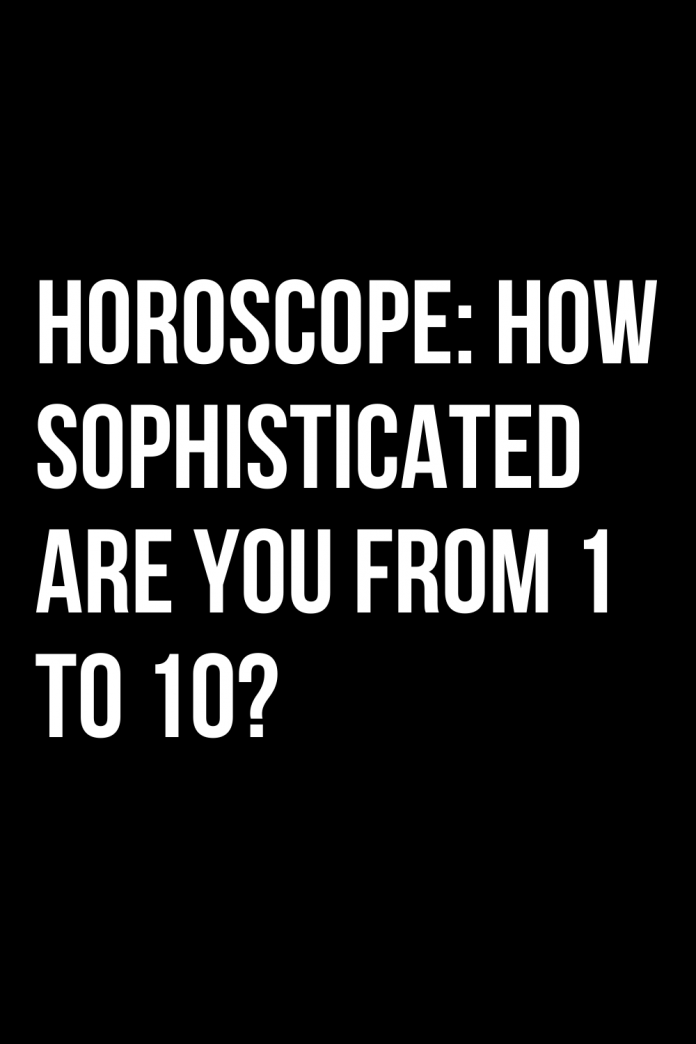 Find out if and how sophisticated you are, all based on your zodiac sign.

When we are asked to describe ourselves temperamentally, most of the time we focus on rather common details such as sympathy, generosity of spirit, the desire to act, being more or less optimistic, etc … These are common characteristics and with which is quite easy to identify. But how does it work when others are watching us? To a foreign glance, what transpires about us can be very different from what we think. To others, for example, we may appear more or less sophisticated both in the ways of doing and in the thought, an apparently unimportant particularity but which in reality can contribute to making us appear more or less reliable, nice and approachable. In short, knowing whether or not others perceive us as sophisticated people can sometimes make a real difference. Today, therefore, after having seen how vain we are and what is the best way to spend a winter afternoon, we will try to understand if and how sophisticated we appear, all with a score from 1 to 10. Being a way of being, the advice is as always to check the profile of your ascendant.

Are you sophisticated? Here’s what the stars say

Aries – Average sophisticated with a nice 6
More than being sophisticated you like to look it so much, which is why you often tend to have attitudes and movements designed ad hoc and all with the intent of giving this impression. In reality, temperamentally speaking you are much simpler than you tend to show yourself. However, the commitment you put into it is such that it still gives you results, so much so that some ways of doing, even if initially studied, sooner or later end up becoming truly yours. For this reason, among the zodiac signs yours is positioned exactly in the middle.

Taurus – A sophisticated 8-
person The tranquility you have in life and the way you carry yourself make you a sophisticated person in the eyes of others. In reality, yours is simply a way of doing things that mostly depends on the desire to live peacefully, enjoying the good times and staying as far away from stress as possible. Even in your simplicity, therefore, you appear as a sophisticated and elegant woman, always able to manage situations and be around people.

Gemini – Sophisticated? Your vote is deliberately a 3
If there’s one thing you just don’t like it’s built people. And when you see someone forcibly sophisticated your first thought is exactly that. This therefore pushes you to be the exact opposite and to show yourself easy-going, simple but able to surprise with your character and your liveliness. Nevertheless, without realizing it, sometimes you too can appear sophisticated, especially when you are on your own or decide to take refuge in your world because you are occupied with thoughts that you prefer not to share with others.

Cancer – Sophisticated enough and with a grade of 7
Character and manners make you appear quite sophisticated, especially when it comes to character. The feeling you give is in fact that of a person who is difficult to approach and who sometimes overestimates himself compared to others. While such an attitude can have its positive sides in work, in interpersonal relationships it can represent a problem, acting as a wall that can create a rift between you and others. Softening your gestures and ways of doing things a bit will therefore be of great help.

Leo – Quite sophisticated with a grade of 8
As a leader you are, how could you not appear sophisticated? For you, the image is practically everything and helps you to show more decisively the messages you want to convey. And since you mostly act in the workplace, being sophisticated is definitely a weapon in your favor, especially when it comes to commanding and getting respected. Be careful not to overdo it, though. Appearing too far from others can have unexpected negative effects.

Virgo – Sophisticated according to the occasion. For you a nice 5
Being able to choose, you prefer to look simple because doing so helps you to relax and enjoy more of your days. Sometimes, however, you are aware that setting a tone can help you take a few steps forward, taking you exactly where you want to go. For this reason you also know how to look like a sophisticated person and to be honest you are also successful. Too bad that the two you are so different as to confuse those who know you first in one area and then in another. Finding a happy medium could be the winning solution.

Libra – Very sophisticated. Rating 10
Among the signs of the zodiac, you are probably the one that gives the greatest idea of ​​being sophisticated. Your elegant and composed manners and the refinement in style and attitudes characterize you to the point of making you appear as a sophisticated and worldly person. Someone who can sometimes be difficult to approach due to their particular character and the awe they inspire in others. However, being like this is part of you and even wanting to change, really doing it would be quite difficult. This does not mean that you cannot limit things, letting yourself go to a bit of naturalness, the same one that you may first discover to appreciate.

Scorpio – Sophisticated without knowing it. Rating 8
Being sophisticated is something that is part of you so you often end up being perceived this way, even when you don’t want to. Between your need for privacy, the mysterious area that surrounds you and the natural charm, giving the idea of ​​the sophisticated person is practically a pretty easy result to guess. Yet you continue to be yourself as well. Those who know you well, in fact, will only be able to appreciate the authenticity that is hidden behind the seemingly hard skin. And who doesn’t want to do it? In that case it is better to be unapproachable. It will waste less time on both sides.

Sagittarius – Not always sophisticated. Rating 4
With the need you have to feel free, being or appearing sophisticated is the least of your problems. Nevertheless, sometimes it can happen that you give this impression, perhaps due to the way you behave or the distances you sometimes tend to take with people you do not trust 100%. For everyone else, however, you remain the easy-going person you are, always ready to embark on new adventures and willing to appear for what it is because simply confident in your abilities.

Capricorn – Sophisticated with a nice 9
Yes, your ways as well as the way you act make you look like a sophisticated person who sometimes tends to be on his own. This partly depends on the seriousness you put into everything you do and which always makes you appear distant from what surrounds you or what happens around you. A solution? Trying to smile more and do less sustained would certainly help. Having said that, having different ways of doing things based on the environments you frequent is something that you do very well and that, apparently, does not create any problems for you.

Aquarius – More sophisticated in appearance than in reality with a rating of 5
In reality you are much less sophisticated than you appear to others. It all depends on your often wanting to seclude yourself and not exactly be a companion. Features that in some cases are perceived incorrectly making you appear for a person who wants to be on his own. To avoid this, you can try to make a more social life or learn to ignore it, knowing that the people you really care know what you are like and that with them you don’t need to pretend or use tricks to show who you are.

Pisces – Moderately sophisticated. Rating 6
Although you are a very easygoing person and always ready to offer her help, to others you often appear as an average sophisticated person. This depends on a sort of elegance that you have in the way you carry and speak and that makes you almost unapproachable at first glance. Fortunately, your kindness soon comes to reveal the misunderstanding, which is why you don’t need to change your ways. Indeed, your sophisticated appearance is often the basis of the fascination you exert on people. Great, isn’t it?